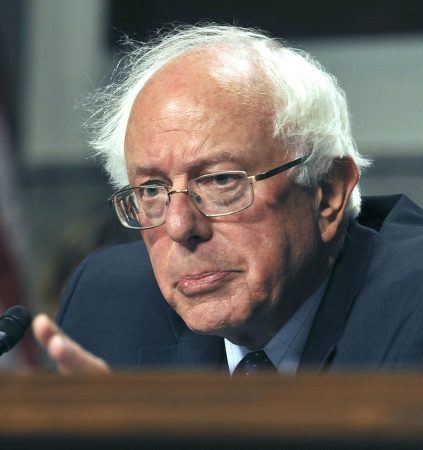 (Sep. 24, 2019) — Not long ago, I received a lengthy e-mail – “Why We Must Renew Our Commitment to the Civil Rights Movement” – from a woman named Melanie Roth Gorelick, who identified herself as Senior Vice President of the Jewish Council for Public Affairs (JCPA).

Honestly, I thought it was one of the preposterous spoofs of that satirical publication, The Onion.

But no… it was the real thing.

In short, Ms. Gorelick recommended that Jews concentrate their attention not on the pandemic of anti-Semitism and violent acts against Jews throughout the world and in the United States of America, but instead on those poor oppressed blacks who have never had it better in the good ole U.S.A., thanks to President Trump!

While Ms. Gorelick briefly mentioned that there is an “increase in anti-Semitism and hate crimes” in America, her entire discourse was devoted to a plea for the Jewish community (2.8 percent of the U.S. population) to turn their impassioned efforts and energies to supporting the cause of blacks in the U.S. (14 percent of the U.S. population), who she claimed still experience grave discrimination.

This in spite of the fact that since President Trump was elected, blacks have never experienced a higher degree of employment, independence, wealth, home ownership, and freedom from discrimination in the history of our country!

Not to omit the president’s First Step Act that gives black prisoners serving lengthy sentences the first chance at freedom for relatively minor offenses that they’ve ever been offered in their lives – an opportunity never proposed by all those empathic and caring Democrats who would have kept them in prison for the rest of their lives!

THE PLIGHT OF JEWS

Jews by the thousands are fleeing from France because of both violent physical and verbal attacks on them by Muslims that go unaddressed by the powers-that-be.

Jews have been relentlessly assaulted, raped, and terrorized in Sweden by Muslims who go unindicted.

Jews have been driven to hide in their basements in the United Kingdom as anti-Semitism is at an all-time high.

Jews have been vilified in Ireland, which passed a law to support the Boycott-Divest-Sanction (BDS) movement to strangle Israel economically.

In far-away New Zealand, the official government website published a fact sheet with a map of the Middle East that showed a fictional place called “Palestine” – but not the authentic, 71-year-old State of Israel.

Anti-Semitic attacks in Germany – yes, Hitler’s and now Angela Merkel’s Germany – have risen by a whopping 20 percent! The country is now what writer Dogan Akman calls an anti-Semitic terrorist state.

Jews in the United States have been mass-murdered in a synagogue, terrorized on college campuses, and spat on by the entire Democrat Party whose members supported the virulent anti-Semitic racism spewed forth from the Jew-and-Israel-hating Democrat Representatives Ihlan Omar (MN), Rashida Tlaib (MI), Alexandria Ocasio-Cortez (NY), and Ayanna Pressley (MA). In fact, recently the execrable Ms. Omar mourned the death of the Muslim Brotherhood tyrant who called Jews “apes and pigs.”

Here, in repulsive detail, is just a small sample of the rancid hatred of these Sludge Sisters that Joel B. Pollak of Breitbart.com spells out.

And not long ago, Bernie Sanders, the Brooklyn-born Jewish senator from Vermont who is running for president again in 2020, told his Socialist/Communist followers: “Our policy cannot be pro-Israel.” 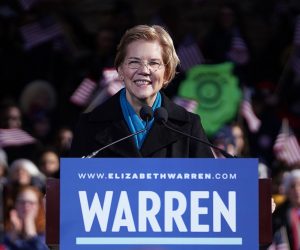 Then there is presidential candidate Sen. Elizabeth Warren (D-MA), who recently said she would push to end the Israeli government’s “occupation” of the West Bank and Gaza (which it obtained in the course of defending itself during the 1967 x-day war). Not to omit that the senator’s “Director of Progressive Partnerships” is Max Berger, co-founder of the extreme Israel-hating group “If Not Now,” the goal of which is to “end support for the occupation” – meaning to get rid of the Jews and Israel itself.

And let’s not forget the Trenton, NJ, Democrat councilwoman Robin Vaughn, who defended a colleague’s use of the expression “Jew her down,” insisting that it’s a verb that refers to negotiating.

Or the non-stop assaults on Jews in Brooklyn. Or the relentless calls for Jewish genocide by U.S. imams.

Or, as writer Jonathan Tobin points out, that the Jewish community’s Reform movement – to its everlasting shame – launched a political war on President Trump right in time for the High Holidays of Rosh Hashanah and Yom Kippur.

LOOK IN THE MIRROR!

Apparently, Ms. Gorelick and others at the Jewish Council for Public Affairs think the organization should ignore these dire facts and stick to its 1960’s retro agenda of helping the blacks who Regressives believe cannot help themselves.

This is clearly an admission that the people who are traditionally known to be the “best friends” of blacks – i.e., Democrat politicians who depend on Jewish votes and prostitute themselves for the money Jewish voters send them – have all utterly failed to improve the poverty, illiteracy, high crime rate, single-mother rate, and rat-infested cities they have controlled for the past 60 years.

WHY THE WORLD’S GROWING JEW HATRED?

The widespread Jew hatred exists because in the back of the minds of all people who consider themselves oppressed is the question – Why are those darned Jews so tiny in number but so much better off than I am?

To me, the answer is simple: Too many have bought the sweetened – but toxic – Kool-Aid that Democrats have sold them that has proved to be their undoing.

Think about it: Why, as documented scrupulously by Robert B. Charles, a former Assistant Secretary of State under Colin Powell and teacher at Harvard University, are the 25 worst cities in the U.S. led by Democrats? And why do the top ten “most dangerous cities” in America, according to Forbes, all have Democrat mayors?

WHAT HELP CAN MS. GORLICK EXPECT?

For all her social-justice posturing, I wonder which black “leaders” Ms. Gorelick hopes to recruit to her mission. Let’s speculate on potential candidates.

“Reverend” Al Sharpton, famous for creating the gigantic race-based Tawana Brawley hoax, for which he was never indicted; fomenting antisemitic race riots in Brooklyn, NY; instigating the deadly boycott of the Jewish-owned Freddy’s Fashion Mart in 1995, and his effusive praise of notorious anti-Semites like the former Nation of Islam leader Elijah Muhammad, as well as Malcolm X, Louis Farrakhan, and Khalid Abdul Muhammad. On and on, to this day! In fact, here is a mountain of evidence about other hateful acts of his to convince you never to enlist him in your ridiculous goal! 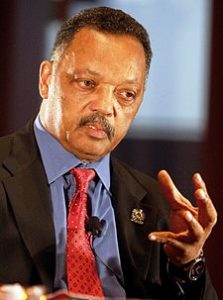 “Reverend” Jesse Jackson, who snidely called NY City “Hymietown,” then denied it, then admitted it, but still couldn’t bring himself to condemn the Nation of Islam’s radical leader Louis Farrakhan, an aggressive anti-Semite and old Jackson ally.

“Reverend” Jeremiah Wright, in whose pew Mr. Obama sat for 20 years, who married Mr. Obama and his America-loathing wife Michelle, and who regularly spewed virulent anti-American and anti-Semitic “sermons” – which both Obamas mysteriously never heard!

How about the newly-elected congresswomen I referred to earlier:

Ihlan Omar (D-MN): says Israel has “hypnotized the world” and “I pray that Allah awaken the people and help them see [its] evil doings….”

Rashida Tlaib (D-MI): ardent supporter of the BDS movement who accuses American Jews of “dual loyalty” to both the U.S. and Israel, and supports a global economic, academic and cultural boycott against Israel.

Alexandria Ocasio-Cortez (D-NY): supports BDS and falsely and maliciously condemns Israel for committing a “massacre” against Gaza “protesters” when in fact the Arabs (who call themselves “Palestinians”) were violent rioters trying to infiltrate Israel to murder Jews.

Or maybe Ms. Gorelick would like to recruit the famous actor Danny Glover to her virtue-signaling mission – he who recently called for a cultural boycott of Israel.

And let’s not forget former president Jimmy Carter, 95 on Oct. 1st, a life-member of the Hate the Jews and Israel Club – who endorsed Hamas and laid a wreath on Yasir Arafat’s tomb.

Or how about the people I listed in a 2008 Canada Free Press article who either staffed Barack Obama’s administration or acted as his advisors or fundraisers, Jew and Israel haters all: General Merrill “Tony” McPeak, Samantha Power, Robert Malley, John Kerry, Rashid Khalidi, Anthony “Tony” Lake, Zbigniew Brzezinski, Lee Hamilton, James (“F… the Jews”) Baker, on and on.

What do all of the above candidates to help Ms. Gorelick have in common? They are all Democrats!

Aha…is that what her plan is really all about and why she launched it in this presidential campaign season––to convince the American public that Democrats are really not the racists they have been for their entire 190-year history?

Does she believe that Americans will erase from their minds the ugly history of Democrat suppression of blacks, as documented so scrupulously by Bill Federer of American Minute? 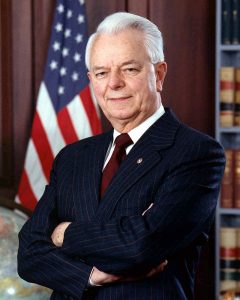 Or is it because Ms. Gorelick wishes that Americans will strike from their memories the facts American Spectator’s Dan Flynn documents about Democrats’ oh-so-cozy and obsequious relationship to the Klan? This includes:

Liberal Jews – by and large raised in America and spared the 5,000-year history of searing hatred, slavery, oppression, and mass murder – have been drawn to leftist politics because it deludes them into thinking that if they are good enough and generous enough and even agree with their enemies enough, all their virtuous acts will somehow, magically, exempt them from the oppression and hatred their ancestors experienced.

And that by subscribing to and acting on the concept of Tikkum Olam – repair of the world––they will fit in and be appreciated, admired, liked, and accepted.

But as writer Jonathan Neumann explains in “Liberal Jews Are Destroying Their Own Religion,” the phrase tikkun olam was lifted “out of context” from a Jewish prayer before WWII to mean social justice and popularized in the 1970s and 1980s by radicals like Michael Lerner, who founded the extreme left-wing magazine, Tikkun.

“Since then,” Neumann continues, Jews “have been led to believe that the purpose of the Jews in the world is to campaign for higher taxes, sexual permissiveness, reduced military spending, illegal immigration, opposition to fracking, the banishment of religion from the public square and every other liberal cause under the sun – all in the name of God. But the truth is that tikkun olam and its leftist politics have no basis in Judaism.

“Tikkun olam is not Judaism at all but a distinct religion [which] teaches that the Jewish People is an outdated and chauvinistic relic, with no need for a nation-state of its own in its ancient homeland. Consequently, Jewish social justice activists help to defame Israel and weaken America’s bond with the Jewish State.”

The alternative, says Neumann, author of “To Heal the World? How the Jewish Left Corrupts Judaism and Endangers Israel, is “a new generation of traditionalist Jews, proud of their heritage and jealous to preserve it. These Jews know that their ancestors did not live to worship a political party nor die for faddish causes. It’s time American Jewry repaired itself instead of the world.”

To which I say, Here, Here!

But will the leftist Jews of the world wake up and smell the coffee? Realize that the people they’re fighting for loathe them? Reclaim their own glorious heritage and start to fight on behalf of their DNA brethren?