REPORT:  “IRAN” TO BE MAJOR FOCUS 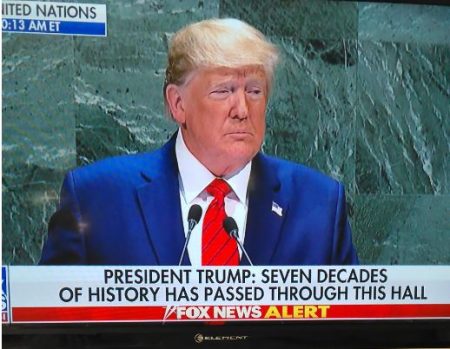 (Sep. 24, 2019) — Shortly after 10:00 a.m. EDT, President Trump is scheduled to speak to the United Nations General Assembly, perhaps on a variety of topics, but according to former Deputy National Security Adviser K.T. McFarland, Trump will stress the need for the world to devise a strategy to deal with Iran.

According to Bill Hemmer of Fox News and The Wall Street Journal Tuesday, three European countries have formally stated their agreement with the United States’ claim that Iran was behind the September 14 attack on Saudi Arabian oil plants.

On Monday, Trump addressed a group on the subject of religious liberty.

He began his remarks to the UNGA at 10:13 a.m., immediately describing what he sees as a prosperous United States in the areas of employment, energy production, freedom from regulations, expanded manufacturing, and a revitalized military.

“If you want freedom, take pride in your country,” he said.  “The future does not belong to globalists.”

He moved on to trade, particularly what he sees as China’s troubling pattern of “gaming the system at others’ expense.”

In response to China’s policies, Trump said, he placed $5 billion in tariffs on that nation’s products coming in to the U.S.  “I will not accept a bad deal for the American people,” he said.

At 10:24, he said that China should “protect Hong Kong’s freedom” in light of weeks of protests there over proposed changes to extradition law.

At 10:25, Trump began to discuss Iran and the sanctions the U.S. has placed on its government.  “As long as Iran’s menacing behavior continues, sanctions will not be lifted; they will be tightened,” he said.

Trump claimed that “four decades of failure” have brought Iran to the position of world pariah and that its leaders should pursue freedom for the people.

He said the U.S. wishes to be at peace and to do away with “endless wars,” shifting to Afghanistan.  “Unfortunately, the Taliban has chosen to continue its savage attacks,” he said at 10:31.

From there, he said that “mass illegal migration” is “unfair” and “unsustainable” to the “receiving countries” and exploits those traveling to get there through human smuggling.  He then decried “open-border activists.”  “You are empowering organizations that prey on innocent men, women and children,” he said.

He later denounced “socialism” and “communism” as the killer of millions, pledging that “America will never be a socialist country.”

Trump said that large social-media companies should not practice censorship.  He stressed an initiative championed by his daughter, Ivanka Trump, to empower women to launch businesses around the world and said that “innocent life” should be protected along with religious liberty.

He pledged to “always uphold” the Second Amendment, the right to “keep and bear arms.”

At 10:48, he advised UNGA members to “lift up your nations,” again invoking the concept of “liberty” and gave his vision for a more peaceful world.