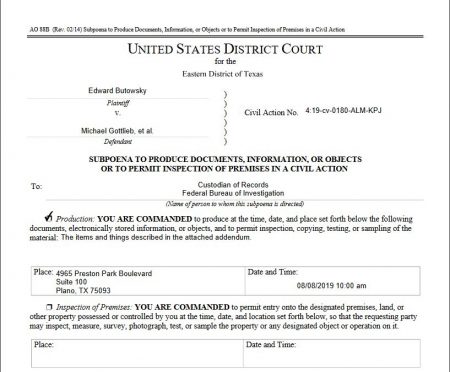 (Jul. 28, 2019) — On July 2, 2019, Ty Clevenger, the attorney representing Dallas investment advisor Ed Butowsky in two federal defamation lawsuits, sent subpoenas to the FBI, the DNC and computer-analysis firm Crowdstrike for production of documentation in connection with the 2016 breach of the DNC’s computer servers which the U.S. intelligence community alleges was conducted by “Russian intelligence.”

The lawsuits, originating in June 2018 and March 2019 respectively, were filed in the Eastern District of Texas, Sherman Division.

The FBI subpoenas requested “items” to include “all data, documents, communications, records or other evidence” relating to former DNC Data Director Seth Conrad Rich, who was fatally shot in the early hours of July 10, 2016 as he walked to his Washington, DC home in the city’s Bloomingdale section.

More than three years later, Rich’s killer has not been apprehended and the case remains unsolved.  The mainstream media has noticeably pushed back against any theory of Rich’s death which departs from the Metropolitan Police Department’s early determination that the 27-year-old was the victim of a “botched robbery attempt” despite his valuables having been left on his person.

A July 9, 2019 article by Yahoo! News’s Michael Isikoff claims that “Russian intelligence agents secretly planted a fake report claiming that Democratic National Committee staffer Seth Rich was gunned down by a squad of assassins working for Hillary Clinton, giving rise to a notorious conspiracy theory that captivated conservative activists and was later promoted from inside President Trump’s White House,” a story which Butowsky told The Post & Email served as the catalyst to amend the March lawsuit on July 15.

On July 2, Clevenger announced his issuance of the subpoenas on his blog, writing:

This afternoon I issued subpoenas to the FBI, CrowdStrike, and the Democratic National Committee for their records on murdered DNC employee Seth Rich. The subpoenas further demand all evidence that Russian hackers were responsible for obtaining DNC emails in 2016 that were later published by Wikileaks.

Hopefully, we will soon know why the DNC did not want the FBI (or anyone else) looking at those servers. Maybe because the DNC knew that one of its own employees leaked the emails?

The suit named as defendants members of the mainstream media, three law firms, a number of their attorneys individually, and a Democrat-affiliated public-relations firm, The Pastorum Group, and alleges that the law firms and their attorneys, as well as The Pastorum Group, “participated in an overarching conspiracy to defame, discredit, intimidate, and silence Mr. Butowsky” (p. 50).

Ten days after the filing of Gottlieb, the Special Counsel’s office submitted its final report to Attorney General William Barr stating that evidence to support the theory of a “conspiracy” or “collusion” between members of the Trump campaign and the Russian government was insufficient.

At a cost to taxpayers of approximately $35 million, the Special Counsel’s office had been tasked with completing two investigations launched by the FBI, one a counterintelligence operation into possible “collusion” and the other into alleged “obstruction of justice.”

In laying out its conclusions, the Mueller report claimed that the “GRU,” the acronym for Russia’s intelligence service, was responsible for the transfer of the DNC emails to WikiLeaks (p. 55), a claim WikiLeaks founder Julian Assange has roundly denied.

As to Rich, on the following page, the report states:

In striking testimony to two House committees Wednesday, former Special Counsel Robert Mueller appeared unfamiliar with the contents of the report; required the assistance of Aaron Zebley, one of the prosecutors on his team; often appeared not to comprehend congressmen’s questions; and claimed he did not know who “Fusion GPS” was.

Mueller’s halting testimony left some observers concluding that he personally had little connection with the actual investigation or writing of the report.  Mueller additionally defended his team of 19 prosecutors, nearly all of whom have connections to the Democrat Party.

As to the “obstruction” consideration, Mueller first stated to the House Judiciary Committee Wednesday that an opinion issued in 2000 by the Justice Department’s Office of Legal Counsel that a sitting president cannot be criminally indicted stood between his investigators and an indictment of President Trump. However, he began the second session to the House Intelligence Committee that afternoon by correcting his statement to say that “we did not reach a determination as to whether the president committed a crime.”

Mueller’s correction both agrees with and contradicts his unexpected public statement on May 29, 2019 in which he said, “We did not, however, make a determination as to whether the president did commit a crime. The introduction to the volume two of our report explains that decision. It explains that under long-standing Department policy, a President cannot be charged with a federal crime while he is in office. That is unconstitutional. Even if the charge is kept under seal and hidden from public view, that too is prohibited. The special counsel’s office is part of the Department of Justice and by regulation it was bound by that Department policy. Charging the president with a crime was, therefore, not an option we could consider.”

As the Mueller investigation proceeded from mid-May 2017 to its conclusion on March 22, 2019, President Trump commented more than once that the FBI never examined the DNC servers which were allegedly breached by Russian operatives to provide the tens of thousands of emails and attachments to WikiLeaks.

In an interview in February between former FBI Acting Director and Deputy Director Andrew McCabe and PBS, McCabe said, “The president may have been engaged in obstruction of justice in the firing of Jim Comey.”  However, the transcript from former FBI General Counsel James Baker’s second day of closed-door testimony reveals Baker admitting that “obstruction of justice” in relation to Trump had been discussed among FBI officials prior to Comey’s firing.

On July 22, 2016, 12 days after Rich’s death, WikiLeaks began releasing the DNC emails in batches which showed that then-DNC chairwoman Debbie Wasserman Schultz was determined that Sen. Bernie Sanders, Hillary Clinton’s primary opponent, would not receive the presidential nomination. The emails additionally showed coordination between some members of the media and the DNC as well as disparagement of certain presumed Democratic voting blocs.

Wasserman Schultz and three other DNC officials were forced to resign their posts, after which then-CNN political commentator Donna Brazile became DNC interim chairwoman.  She is now a Fox News contributor.

The amended filing in Gottlieb made the explosive claim that well-known journalist Ellen Ratner relayed a message from Assange to Butowsky with the request that it be conveyed to Seth’s parents, Joel and Mary Rich.  “I’ve sat here for two years and kept people’s secrets, and I’m done,” Butowsky told The Post & Email in an interview published July 17 in which he affirmed the account of Ratner’s involvement in relaying the message from Assange.

The message reportedly was that Seth Rich was Assange’s source for the DNC emails and that Assange wanted his parents to know as they sought to discover their son’s murderer.  Assange did not believe the Metro PD was properly investigating, Ratner reportedly told Butowsky following her face-to-face meeting with Assange, who was then living in the Ecuadorian Embassy in London.

Ratner asked Butowsky to communicate with the Riches since her late brother, Michael Ratner, had represented Assange in various matters, Butowsky told us.  According to the amended filing and Butowsky, he did not immediately contact the Riches, but rather, waited until December 17, 2016.

In a video of a conference which took place the day after the 2016 election, Ratner is seen telling former congressman John LeBoutillier that she had recently “spent three hours with Julian Assange” and that “it wasn’t the Russians” who stole the emails (62:00).

A letter from the Chief of the Civil Division for the U.S. Attorney for the Eastern District of Texas to Clevenger dated July 23, 2019 requested “a summary of information sought and its relevance to the proceedings” for Clevenger’s FBI subpoena.  In an email on Saturday, Clevenger explained that “Any time you serve a subpoena on the FBI, you have to tell the nearest USAO why you need the information.”

On July 19, represented by counsel, Crowdstrike and the DNC declined to provide documentation responsive to Clevenger’s subpoenas.

In Clevenger’s responsive letter to the U.S. attorney’s office dated July 26, he wrote that the first seven items in the FBI subpoena focus on “whether the Rich brothers were responsible for transferring emails to Wikileaks.”

The request appears on page 2 of the subpoena as:

In a Justice Department Inspector General report released in April last year, McCabe was said to have “lacked candor” during interviews surrounding his interactions with the press while he served as FBI deputy director and was referred to the U.S. Attorney for the District of Washington, DC for criminal investigation.

In February, CBS News reported that according to McCabe’s attorney, “A criminal investigation into whether former FBI Deputy Director Andrew McCabe made false statements during an internal probe into a news media disclosure remains open.”

McCabe has denied any wrongdoing.  In the CBS report, he was quoted as having said of the Mueller investigation to that date, “It’s a remarkable investigation, and it’s one that’s produced tangible meaningful results.  And I think that alone justifies and validates certainly our initial fears and concerns, and I think it validates the process that Mueller and his team have gone through to get here.”

On Sunday, Butowsky told The Post & Email that “a very senior person” with whom he is “100% confident” informed him that “McCabe was basically trying to keep information from flowing, and he instructed people across the board to not investigate” the Seth Rich murder.

Clevenger concluded his letter with, “All of the information requested in our subpoenas falls within the purview of the Russian collusion investigation, specifically whether Russian hackers (versus the Rich brothers) were responsible for transferring DNC emails to Wikileaks.”

What Does the FBI Know about the Murder of Seth Rich? added on Sunday, July 28, 2019

3 Responses to "What Does the FBI Know about the Murder of Seth Rich?"