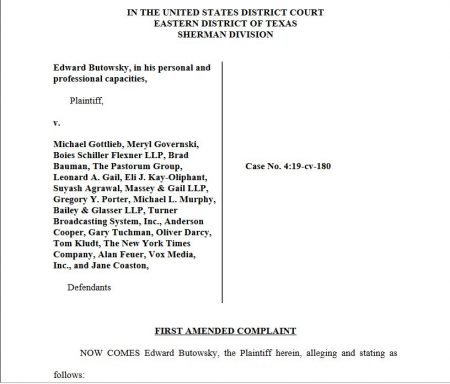 (Jul. 17, 2019) — A court filing on Monday amending a lawsuit filed by Atty. Ty Clevenger on behalf of businessman and Fox News unpaid contributor Ed Butowsky claims that well-known media figure Ellen Ratner is the source who conveyed from WikiLeaks founder Julian Assange to Butowsky that the late Seth Rich and his brother Aaron provided emails from the DNC servers to WikiLeaks in 2016.

The announcement of the amended filing appeared on Clevenger’s blog Monday morning.

The leaked emails are considered by many in political circles to have tipped the presidential election in Donald Trump’s favor after Democrat Hillary Clinton was favored to win, according to mainstream media polling.

The original lawsuit, Butowsky v. Gottlieb, et al, was filed on March 12, 2019 in the Eastern District of Texas against a number of law firms, attorneys, media outlets and reporters individually alleging “false allegations that he [Butowsky] conspired with White House officials to divert attention away from earlier (and equally false) allegations that President Donald Trump ‘colluded’ with the Russian government to ‘steal’ the 2016 Presidential election from Hillary Clinton,” among other claims.

Clevenger additionally represents Butowsky in a suit alleging that NPR and its reporter, David Folkenflik, defamed him by advancing the “false narrative” that a May 16, 2017 article by Fox News’s Malia Zimmerman reporting that then-Fox News contributor and former Washington, DC detective Rod Wheeler had confirmed evidence demonstrating that Seth Rich had provided the emails and attachments to WikiLeaks was inaccurate.

On July 10, 2016, 27-year-old DNC Data Director Seth Rich was fatally shot as he made his way to his Washington, DC home during the early-morning hours unaccompanied. His killers have yet to be apprehended, and the DC Metropolitan Police Department has remained silent on any progress or lack thereof in solving the case.

According to major media, the Metro PD characterized the fatal attack as a “botched robbery attempt,” although early on, it was reported that any items of value were left on the young man’s person.

Without definitively confirming that Rich was a source, in August 2016 WikiLeaks founder Julian Assange offered a $20,000 reward for information leading to the apprehension of the killer or killers.

On July 22, 2016, just prior to the opening of the Democratic National Convention, WikiLeaks began releasing batches of the DNC emails demonstrating coordination between the DNC and certain mainstream media figures; the disparaging of certain presumed Democratic voting blocs; and the stated predetermination on the part of then-DNC chairwoman Debbie Wasserman Schultz that Hillary Clinton rival Sen. Bernie Sanders would not become the party’s presidential nominee.

Approximately a week after the Fox News article was published, it was removed with a note citing a lack of adequate editorial review.  After vilifying Fox’s Sean Hannity for his reportage on the case and some outlets’ targeting of his advertisers, the mainstream media celebrated the retraction of the article.

On behalf of Rich’s parents, Joel and Mary Rich, Butowsky reportedly contracted and paid Wheeler to launch an independent investigation into their son’s murder, an arrangement which quickly terminated after the May 16, 2017 Fox News article appeared.

Wheeler subsequently filed a lawsuit against Butowsky, Twenty-First Century Fox, and Zimmerman individually claiming he was purposely misquoted in her article and therefore “defamed.”  The suit was dismissed last August along with a similar action filed in January 2018 by Joel and Mary Rich against the same defendants claiming “emotional distress.”

The Riches have appealed their case.

Butowsky v. Gottlieb, et al refers to the allegations made against the Trump campaign of “collusion” or “conspiracy” with Russian operatives to gain an election advantage as the “Russia Collusion Hoax” (p. 8).  Ten days after the suit was registered with the Texas federal court, Special Counsel Robert Mueller delivered his report to Attorney General William Barr with the conclusion that there was insufficient evidence to show that anyone from the Trump campaign engaged in “collusion” or “conspiracy” to impact the results of the 2016 election.

An internet search Wednesday morning shows a dearth of mainstream reportage on the amended complaint, which has visibly attempted to “debunk” the “conspiracy theory” that the Rich brothers provided the emails to WikiLeaks rather than the “Russians,” as was reported by Mueller’s team (p. 73).

As some have noted, the Mueller report does not disclose how the team reached the conclusion that “Russians” were responsible for breaching the DNC servers and providing the emails to WikiLeaks.

President Trump has claimed that the FBI never examined the DNC servers in question to much pushback from the media.

On April 19, 2019, Jane Coaston of Vox Media, both of whom are named as defendants in Butowsky’s lawsuit, published an article titled, “The Seth Rich Conspiracy Theory Needs to End Now,” claiming:

Special counsel Robert Mueller’s report, released on Thursday, raises a lot of new questions — but in one section, in just under 320 words, it answered another one, putting to rest one of the most harmful political conspiracy theories in recent memory.

The report definitively disproved the notion that a Democratic National Committee staffer named Seth Rich was the source of leaked DNC documents later published by WikiLeaks, and that his July 2016 murder came as the result of his decision to leak those documents to WikiLeaks.

This wasn’t true, although Trump associates like Jerome Corsi, Roger Stone, and countless others, have argued vehemently for years that it was. And WikiLeaks, and its founder Julian Assange, knew it.

Coaston had additionally described the Fox News article as “false.”

As the Mueller report stated, Assange, who is now serving a one-year prison term in the UK after his unceremonious ouster in April from the London Ecuadorian embassy, has denied that “Russian hacking” yielded the DNC emails (p. 57).

Pages 13-14 of the amended complaint state that Butowsky did not immediately reach out to the Riches after Ratner reportedly relayed the information from Assange, but rather, that Butowsky waited until mid-December 2016. 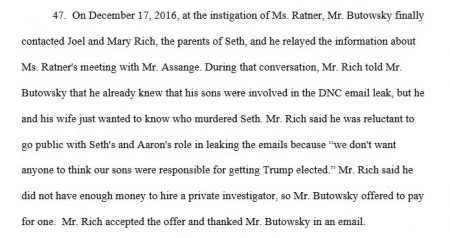 On Monday afternoon, The Post & Email spoke with Butowsky, who told us that he and Ratner have been “very close friends.”

“One day, she told me  — and this happened over the phone, initially, ‘You would not believe what I learned,'” Butowsky said, which he recalled occurred upon her return from Europe in May 2016 following the death of her brother, Atty. Michael Ratner.

Michael Ratner had represented Assange, Chelsea Manning and Edward Snowden as a result of their disclosures of “government overreaching,” according to The Guardian on May 11, 2016.

Butowsky said that during her return trip to the U.S., Ratner stopped to visit Assange at the Ecuadorian embassy, where he had sought asylum from extradition by Sweden and the U.S. in August 2012.  During the visit, Butowsky said, quoting Ratner and as stated in the amended complaint, Assange told her “three things,” one of which was to “tell Joel and Mary Rich that their boys were the ones responsible for selling the emails to WikiLeaks.”

According to Butowsky, Ratner told him that Assange perceived that “the Washington police were not investigating” Rich’s death and wanted his parents to become empowered to discover their son’s murderer(s).

Butowsky said Ratner did not want to convey the information to the Riches herself because of her late brother’s attorney-client relationship with Assange and therefore asked Butowsky to be the messenger.

Butowsky said that it has been “to his detriment” that he withheld Ratner’s name until Monday.  A catalyst for making it public, he told us, was an article published on July 9 by Yahoo! News “chief investigative correspondent” Michael Isikoff, whose name also appears on an article reporting that former Trump campaign informal adviser Carter Page was under investigation by “U.S. intel officials” for possible improper communications with Russians six weeks before the November 2016 presidential election.

Page was never charged with a crime, and the underlying “evidence” submitted to the Foreign Intelligence Surveillance Court (FISC) by the FBI to obtain surveillance warrants consisted of a now-discredited “dossier” compiled by as-yet-unnamed sources for former British intelligence agent Christopher Steele.

Included in the “evidence” was Isikoff’s September 23, 2016 article on Page, who in recent interviews has revealed that for “decades,” he has been a source of information to the FBI and U.S. State Department.  In February, Isikoff expressed surprise that his article was included in the FBI’s submission to the FISC.

In May, Attorney General William Barr ordered an investigation into the origins of the Trump-Russia “collusion” probe, which began with the FBI and ended with Mueller’s finished report.

In the summer of 2016, Russian intelligence agents secretly planted a fake report claiming that Democratic National Committee staffer Seth Rich was gunned down by a squad of assassins working for Hillary Clinton, giving rise to a notorious conspiracy theory that captivated conservative activists and was later promoted from inside President Trump’s White House, a Yahoo News investigation has found.

The article equates what Isikoff described as the “fake news” about Rich’s killing to a “political conspiracy.”  It also referenced former Assistant U.S. Attorney Deborah Sines, now retired, as having been assigned to the Rich murder case and stating she was convinced that the Russian intelligence agency SVR was responsible for the “false” narrative of Rich’s involvement with WikiLeaks.

According to Isikoff, the Riches are distressed because “lies about their son’s death continue to circulate” on social media.

Butowsky, who is mentioned in Isikoff’s July 9 piece, calls the article’s claims about him “absolutely absurd.”  “He’s basically saying that here I am, Ed Butowsky, a financial adviser in Dallas, am an agent of the Russian government,” he told The Post & Email.  “I already proved to Isikoff that nothing he is writing and saying in his podcast is true.”

“I’m not a Russian agent; all I did was offer to help a family whose son was murdered; and then all of a sudden they got political,” he said, adding that Joel Rich said to him, “Ed, we know our boys did that.  I just want to know who murdered my son.”

A similar claimed statement appears on page 14 of the amended complaint.

On Monday, Butowsky forwarded an email he exchanged with Ellen Ratner which is referenced in the lawsuit (p. 15). In the communication,  Butowsky wrote, “If the person you met with truly said what he did, is their a reason you we aren’t reporting it ?” [sic]  Ratner responded, “because— it was a family meeting—- I would have to get his permission– will ask his new lawyer, my sister-in-law.”

Butowsky said he is “speaking out” because he is “sick and tired of people not stepping up and being honest.”  He also cited “tremendous financial issues” consisting of “$800,000 of legal bills because of a made-up story.”

Just after speaking with Butowsky, we contacted Ratner and left a voice message but received no response as of press time.