BUT WHERE IS THE COVERAGE? 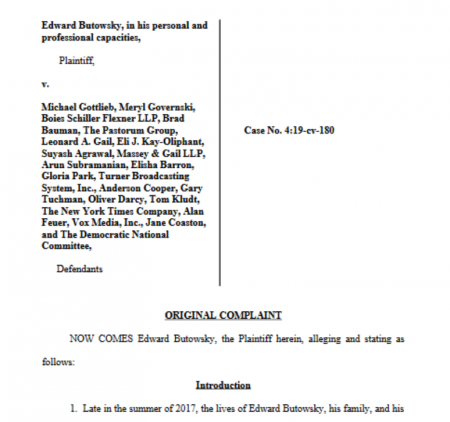 (Mar. 15, 2019) — On Tuesday, a lawsuit was filed in the Sherman Division of the U.S. District Court for the Eastern District of Texas against two law firms, five attorneys individually, a public-relations firm, Turner Broadcasting System, The New York Times Company, and Vox Media as well as specific individuals employed at those outlets.

Turner Broadcasting System is the parent company of CNN, several of whose journalists are named in the suit.

The action, filed by Attorney Ty Clevenger, claims that investment manager Ed Butowsky, his family and colleagues, as a result of two federal lawsuits dismissed last August, became the victims of “false allegations that he conspired with White House officials to divert attention away from earlier (and equally false) allegations that President Donald Trump ‘colluded’ with the Russian government to ‘steal’ the 2016 Presidential election from Hillary Clinton.”

Further, the lawsuit alleges, “On August 1, 2017, New York attorney Douglas Wigdor and his partners filed a bogus lawsuit alleging that Mr. Butowsky, Fox News reporter Malia Zimmerman, and Fox News itself had fabricated a false story that a former Democratic National Committee (“DNC”) employee – not the Russian government – was responsible for stealing DNC emails and giving them to Wikileaks.”

The claim extended to the Trump White House and the person of then-Press Secretary Sean Spicer, who, according to The Washington Post, said he met with Wheeler and Butowsky on one occasion but was unaware of the specifics of the story.

Wigdor’s client was former Fox News commentator and former Washington, DC detective Rod Wheeler, who was hired to investigate the July 10, 2016 murder of a young DNC employee, Seth Rich, on behalf of his parents, Joel and Mary Rich.

The second lawsuit concerning Butowsky was filed last March on behalf of Joel and Mary Rich by now-defendant Massey & Gail LLP.  The Riches’ lawsuit named Fox News, Zimmerman and Butowsky, who has also been a Fox News and Fox Business guest commentator, as defendants and claimed that Butowsky “reached out to the family under false pretenses to support stories that Seth Rich leaked DNC emails to WikiLeaks.”  For that article, Butowsky was quoted as having told ABC News, “Mr. and Mrs. Rich should come forward and be honest with people” and that the lawsuit was “‘one of the dumbest’ he’d ever seen.”

On May 16, 2017, Fox’s Sean Hannity interviewed Wheeler, who said he was “hired by the family” and “paid…by a third party,” which Butowsky has confirmed was he.  On the same day, Zimmerman published an article making the claim that, according to a federal investigator, Seth Rich had transferred thousands of emails and attachments gleaned from the DNC’s servers to WikiLeaks in 2016.  The emails, published beginning in July of that year, are believed by many to have caused Hillary Clinton to lose the presidential election to Donald Trump.

After a media push-back erupted, Fox News retracted the story, claiming it had not received proper review before its publication. The mainstream media widely covered the retraction, characterizing speculation that Rich was killed as a result of his allegedly providing the emails to WikiLeaks as a “conspiracy theory.”  Some outlets went as far as to organize a boycott on Hannity’s advertisers.

In his lawsuit, filed a year ago and dismissed August 2, Wheeler claimed that Zimmerman altered statements he gave to her for the purpose of promoting the Rich “WikiLeaks” narrative.

Rich’s murder has been labeled a “botched robbery attempt,” and the case remains unsolved.

As managing partner of Dallas-based Chapwood Investment Management, Butowsky’s 2013 biography states he “is an internationally recognized expert in the investment wealth management industry.”  In early August last year, InvestmentNews quoted Butowsky as having said he would sue “anybody who did anything negative to me” as a result of the two lawsuits, which were dismissed just days earlier.

In June, Clevenger filed suit on Butowsky’s behalf against NPR and a number of its reporters, claiming specifically that journalist David Folkenflik falsely characterized Butowsky as “The Man Behind The Scenes In Fox News’ Discredited Seth Rich Story” in an article published on August 16, 2017, among others.  The suit demands $57 million in compensation for alleged defamation and “millions upon millions of republications of false and defamatory statements by third-parties” (p. 72).

In the cited article, Folkenflik wrote, “In a May 16 story that has since been discredited, Fox News breathed new life into conspiracy theories making the rounds in conservative circles about the murder last year of Seth Rich, a 27-year-old aide to the Democratic National Committee. Fox reported that Rich’s computer had been linked to leaks of Democratic Party officials’ emails to WikiLeaks and that his death might be connected to those leaks. Fox also reported there might have been a cover-up.”

On August 3, 2018, Folkenflik reported the dismissal of the Wheeler and Rich lawsuits in an article titled, “Judge Dismisses Suits Against Fox News Over Seth Rich Story.”  Folkenflik and NPR have denied Butowsky’s claims, with NPR stating it “stands behind David Folkenflik’s reporting,” according to Courthouse News on June 22, 2018.

Last April, represented by Atty. Steven Biss, Butowsky sued Charles Schwab for $100 million, alleging “wrongful termination” of his services after a dozen years stemming from the two lawsuits.  In Clevenger’s most-recent lawsuit, Butowsky claims death threats, the burglarizing of his cars, and the necessity of hiring a bodyguard for his college-age son.

White House Press Secretary Sarah Sanders denied the claim that there was coordination between the White House and Butowsky on the Fox News article.  Under excoriating criticism from a White House reporter just after the suit was filed, Sanders responded from the podium that her predecessor, Sean Spicer, had no involvement in the production of the retracted article. “The president had no knowledge of the story…Beyond that, it’s ongoing litigation that doesn’t involve anybody in the building, and so I refer you to the parties that it does,” Sanders said (see video).

On August 2,  Alan Feuer of The New York Times, one of Butowsky’s individual defendants, reported the dismissal of the Riches’ lawsuit. As background, he wrote, “Mr. Rich’s parents, Joel and Mary, filed the suit in Federal District Court in Manhattan in March, arguing that Fox News had caused them emotional distress and engaged in ‘extreme and outrageous conduct’ by publishing a fabricated article claiming that their son had leaked thousands of internal emails from the Democratic National Committee to WikiLeaks.”

While there was substantial reporting when Butowsky was sued by Wheeler and the Riches, very few outlets have reported on Butowsky’s own legal actions since that time.

Zimmerman is founder of The Hawaii Reporter, which she left to join Fox News in late 2015.  Her latest article for Fox appears to have been published in August 2017.  Her Twitter account, though “protected,” indicates she remains at Fox News.

On Thursday, The Post & Email spoke with Clevenger about his most recent lawsuit on Butowsky’s behalf.  “We alleged in the lawsuit that Fox News never identified any flaws in their reporting,” he said of the retracted May 16, 2017 article.  He also said he has “heard” evidence supporting Butowsky’s claim of a conversation Butowsky said he conducted with Joel Rich as alleged on page 8 of the lawsuit.

Contrary to mainstream outlets’ claims that “Russians” “hacked” the DNC’s servers, stole the emails and provided them to  WikiLeaks, the organization’s founder, Julian Assange, has denied receiving the emails from “the Russian government” or any “state party.”  As for Assange’s denial of Russia’s involvement, Clevenger stated to The Post & Email, “The media had no problem believing him on Abu Ghraib or anything else, but now all of a sudden he can’t be taken seriously when he says it does not come from the Russians?”

On the subject of the mainstream media’s coverage of Rich’s death nearly three years ago, Clevenger told us, “I think there’s clearly an organized bullying campaign to shut down anyone that asks questions, much less expresses an opinion, on the Seth Rich murder.”

On Thursday we reached out to defendants Bois Schiller Flexner LLP, Massey & Gail LLP, The Pastorum Group, The New York Times Company, Vox Media, Turner Broadcasting, and the Democratic National Committee (DNC).  On Thursday afternoon, the DNC responded in an email acknowledging receipt of our message: 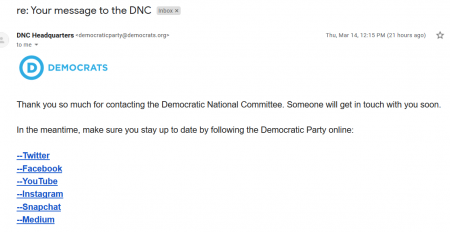 By telephone on Thursday, an operator at Turner Broadcasting mistakenly directed our call to the “Comments” line after we stated we were seeking comment from the company on a legal action naming it as a defendant.

Within minutes of the time we sent emails to two media representatives at The New York Times Company, the outlet was noted in our readers’ log as having landed on our home page and opened one of our navigational tabs.

As of press time, we have received no response from The Times or the other defendants.