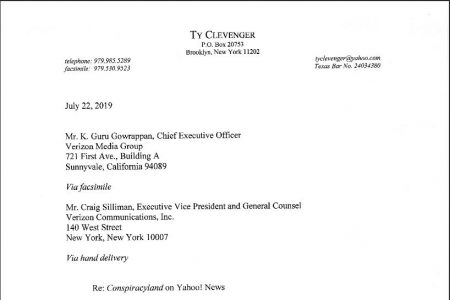 (Jul. 22, 2019) — On Monday Atty. Ty Clevenger of Brooklyn, NY and Texas sent a letter to two Verizon executives stating that according to his client, Ed Butowsky, information disseminated in a Yahoo! News article and podcast allegedly involving Butowsky was published with the knowledge that it is “inaccurate.”

Verizon is the parent company of Oath, Inc., Yahoo.com, and The Huffington Post.

The article, written by Yahoo’s “chief investigative correspondent” Michael Isikoff, is titled, “Exclusive: The true origins of the Seth Rich conspiracy theory. A Yahoo News investigation” under the broader category of “Conspiracyland.”

On July 10, 2016, 27-year-old Rich, who was then DNC Data Director for Voter Registration, was fatally shot near his home in the Bloomingdale section of Washington, DC. Despite its high profile, the murder has never been solved, and the DC Metro Police Department has provided no recent updates on any investigation that might be ongoing.

Isikoff’s article claims that “Russia’s foreign intelligence service, known as the SVR,” was responsible for launching the “notorious conspiracy theory” that Rich, and not Russian operatives, had provided thousands of emails from the DNC servers to WikiLeaks.  Isikoff states that Butowsky “played a key behind-the-scenes role” in promoting an article on the subject written by Fox News journalist Malia Zimmerman which was later retracted.

In an interview last week, Butowsky told The Post & Email that he believes Iskikoff equated him in his article to “a Russian agent.”

In his first paragraph to the executives, Clevenger wrote of Butowsky, “My client has made Mr. Isikoff aware of extensive evidence that he neither fabricated nor misrepresented any information about Seth Rich and/or Wikileaks. Much of that evidence can be found at http:\\debunkingrodwheelersclaims.net.”

The referenced website contains text messages, documents, audio files and court filings Butowsky claims demonstrate that the former private investigator for the Rich family, Rod Wheeler, attempted to misrepresent that he was “misquoted” by Zimmerman in her May 16, 2017 article, which was retracted one week later for an alleged lack of “editorial scrutiny.”

As a favor to Seth’s parents, Joel and Mary Rich, Butowsky paid for Wheeler’s investigation as a result of an apparent lack of progress in the DC Metropolitan Police Department’s probe.  In an interview with Pete Santilli last week, Butowsky said that while he funded Wheeler’s work, the Riches chose him from among a number they interviewed.

Many believe that WikiLeaks’ release of the DNC emails cost Hillary Clinton the 2016 presidential election. Exactly three years ago on July 22, 2016, WikiLeaks published the first batches of emails which showed coordination between some members of the mainstream media and the DNC; disparaging remarks made about presumptive members of Clinton’s voter base; and a clear preference on the part of then-DNC chairwoman Debbie Wasserman Schultz for Clinton’s nomination over her primary contender, Sen. Bernie Sanders.

Joel and Mary Rich have urged anyone with information to contact the Metro DC Police Department.  However, well-known journalist Ellen Ratner said the day after the 2016 election that in a face-to-face meeting she said she had with WikiLeaks founder Julian Assange, Assange told her he was convinced that the Metro PD was not investigating and wanted Seth’s parents to know that their son was the source of the DNC emails so that they might discover through alternative means who perpetrated his murder.

In August 2017, Wheeler filed suit against Butowsky, Zimmerman and Twentieth Century Fox alleging that “Malia Zimmerman… worked with Ed Butowsky, the Texas businessman, to develop a ‘sham’ story about Rich’s death that Fox News published online in May 2017 and referenced on-air multiple times,” as CNN reported it upon its dismissal in early August last year.

U.S. District Court Judge George B. Daniels found that Wheeler had failed to state a claim.  At the same time, he dismissed a suit filed by Joel and Mary Rich against Butowsky, “Fox News Network,” and Zimmerman “asserting claims for intentional infliction of emotional distress” on the plaintiffs.

Joel and Mary have appealed the case’s dismissal.

According to Assange, WikiLeaks does not divulge its sources publicly, although approximately a month after Rich’s murder, Assange offered a $20,000 reward for information leading to the perpetrator and strongly suggested in his statement that Rich was a source.

Despite the lawsuits and the mainstream media’s efforts to frame Seth’s alleged connection to WikiLeaks as a “conspiracy theory,” Butowsky claimed to Santilli and this writer last week that Joel Rich admitted to him in a December 2016 telephone conversation that he is aware his sons were the source of the DNC emails WikiLeaks released.

On July 15, Clevenger revised a March lawsuit against three law firms and their attorneys individually; a Democrat-oriented public-relations firm and several media figures as a result of Isikiff’s article, Butowsky said, with the key revelation Butowsky’s relating of Ratner’s communications with him as to Assange’s reported statements about Seth Rich.

Referencing the two lawsuits in which Clevenger represents Butowsky naming NPR and CNN, among other media companies respectively, as defendants, Clevenger closed his letter with:

The letter was copied to Isikoff.