There Is No Law But Democrat-Deep State Law 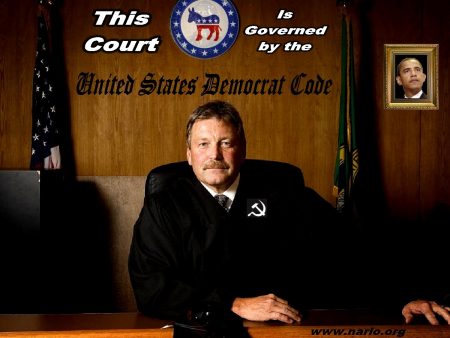 (Jun. 23, 2019) — Many have wondered, if we were able to defeat the Germans and the Japanese in World War II, then why is it so difficult for conservative patriots to win over the unconstitutional assault on our Representative Republic by the Communists-Socialists-Progressive-Democrats?

If all things were equal, those who wonder would be right.  We should be able to “somehow” restore America to the intent of the Founders.  But sadly, all things are not equal.

In World War II, we had two enemies, Germany and Japan.  Most of America was behind defeating both enemies, at whatever cost.  Over 16,000,000 men were in active service to defend their country.  Government rationed many products from milk, to meat, to tires.  Tens of millions of Americans were involved in making war machines, bullets and bombs.  The country was in up to its neck fighting the two enemies.  We had purpose.  We had clarity.

But today, our war is totally different.  There is no clarity, only clouds of uncertainty.  We don’t have two enemies; we have multiple domestic enemies and most of the time we don’t know which enemy to attack at any one time.

We have the media who, by some quirk of fate, got into bed with the Democrats, probably because they were brainwashed in our liberal public schools and colleges.   We have the ever-powerful deep state consisting of almost 22,000,000 Americans that were, are and continue to be the product of our liberal public schools and colleges.

We have become a country hopelessly divided, fighting with each other instead of our domestic enemies.  All of our institutions have become infected with the Progressive ideology (i.e. socialism).  Our kids, for over three generations, are being brainwashed in it.

Meanwhile, the people are asleep and are watching it happen in apathy or turning away in disinterest.  In world war we were united.  In peace we are divided.  We the people no longer exist as one united people in freedom, if we ever were.  We the people are nothing more than a bunch of money-hungry cliques, each clamoring for a piece of the government pie, much like school kids fighting over a piece of candy.

Our enemy is a nine-headed hydra that comes at us from different directions and snaps at us every day.  We try to get out of government’s way but alas, there is no way to avoid it.  We are locked in a government spider web and there is no escape.  Government tyranny was born when Progressivism became embedded in our society and in our institutions.

Ladies and gentlemen, it is not an accident.  What you see today was planned for well over 100 years and is the brainchild of that Progressive ideology.  They have been hugely successful, having convinced a majority of Americans that Progressivism is the way and the light.  Otherwise, nothing could explain the rise and inexplicable popularity of Bernie Sanders and the other 22 Democrat candidates running for president on a radical socialist platform.

America is supposed to be a nation of objective laws, written for the benefit of a free and peaceful society with the purpose of maintaining societal order.  But the law books in thousands of courtrooms and attorneys’ offices and laid down in print in the Federal Register have taken on the sour odor of Democrat Socialism.  Since our first dictator President, Woodrow Wilson (FDR was the second dictator President), most of the laws that now exist were written for the sole purpose of buying votes from naïve Americans, demonstrating the diabolical, long-range plan of the Progressives.  That was until the cult of environmentalism raised its ugly head in the late 1960’s under the National Environmental Protection Act of 1969.  It gave the Socialist-Democrats another platform that would appeal to the ignorant masses, especially if they used massive, planet-wide propaganda and societal guilt to defend it.

The Democrats’ first religion was socialism; not socialism for socialism’s sake, but once again, for the sole purpose of buying votes to gain perpetual political power.  (Democrat Law)  The Democrats’ second religion is radical environmentalism.  Ask yourself:  Why is it that Democrats are the only group that is pushing protection of the environment at any cost, including the loss of constitutional freedoms?  Why is it that Democrats are the only people who have signed onto man-caused global warming and vehemently resist any attempts to challenge the pseudo computer model science that supports it?  (Democrat Law)  Why is it that Socialist Democrats are against all of those endeavors that were created by a free society for the benefit of all mankind, like the railroad, the steam engine, fossil fuels, power-generating dams, nuclear power, medical breakthroughs, airplanes and the automobile?  (Democrat Law)

Why is it that Democrats are intent on opening our borders, tearing down our border walls and letting in as many illegal aliens who can flood across our borders and overwhelm our security, educational, medical and welfare systems?  Massive illegal immigration cannot and will not benefit America or the American people.  Why, then, do Democrats embrace illegal immigration?  There is only one reason and that reason is to gain more future votes for Democrats until they reach the point where a conservative American ideology will become forever irrelevant and powerless.  Their compassion for the illegal aliens is a ruse, an obfuscation.

Socialist-Democrat law has for many years and continues to govern America and Americans.  There appears to be no peaceful way to turn back the clock.  Socialist-Democrat law is a law strictly for Democrats.  They can break the law, but under Socialist-Democrat interpretation of the law they are given a pass.  Need we name names?  They even encourage breaking the law by sanctioning and defending illegal immigration.

But the deep state has another unseen power.  First, the employees of the government bureaucracy are protected by the legal doctrine known as sovereign immunity.  If you sue a government employee for damages resulting from that employee’s malfeasance, corruption, or acting under the color of law, their first line of defense is sovereign immunity, and they usually win on that defense alone.  Their second defense is the union contract.  To fire a government employee can be so administratively impossible that most supervisors don’t even try.

But even worse than that, government employees can thwart their own leadership (and the law) by refusing to administer the law as it is written, for politically-motivated or ideological reasons.   Or they can sabotage the law by making unauthorized changes.  Operating as a bloc, they are virtually immune from disciplinary action.  (Deep state Law)  Remember, the deep state counts the votes.  They issue drivers’ licenses and marriage permits, building permits and protest permits.  The deep state has the power to stop you from doing anything just by “tweaking” the law, ignoring the law, or thumbing their nose in your face.  (More deep state Law)

In one land development project we were doing, we had to submit a drainage plan.  It cost a lot of engineering dollars to create a drainage plan.  We submitted our engineer’s drainage plan to the permit department.  An employee in that department red-marked the areas in the plan that he said did not meet code.  So we sent the drainage plan back to our engineers for revisions and re-submitted it to the permit department.  Along came another permit employee who red-marked our plan again, totally different than the red marks from the first permit employee.  Again, we were forced to revise and re-submit the plan.  Then a third government employee found other areas “he thought” did not meet code.  The three revisions added a huge additional and unnecessary cost to the development.

Was this action by the three government employees done to slow down or stop our development, or could it be attributed to government inefficiency, negligence, or incompetence?  Multiply our situation by hundreds of thousands of those forced to comply with the government bureaucratic permit process and you can impute why Americans are forced to pay many times more for their homes, apartments and commercial buildings.  This is the cost of “unregulated deep state law.”

Many in the deep state operate under what is called the Color of Law.  The color of law is described as: “the appearance of an act by government being performed based upon an alleged legal right or enforcement of a statute, when in reality no such legal right or statute exists.”  Although there are laws that prohibit government employees from acting under the color of law, most get away with it because the people affected never challenge the government employee or the illegal act.

Sadly, America is an out-of-control train picking up speed and going down a steep hill with no brakes.  A very sharp curve awaits the train at the bottom of the hill.  That sharp curve is what Argentina and Venezuela have and are experiencing under the banner of unchecked socialism.  That sharp curve was depicted in an illuminating slide show entitled, “Don’t Cry For Me, Argentina.”

But what if just 10,000 Americans decided to ferret out the CORRUPTION in government, local, state and federal, that we all know exists?  Exposing corruption is like the cleansing of the soul.  Those 10,000 could make a huge difference.

There Is No Law But Democrat-Deep State Law added on Sunday, June 23, 2019