“THE MEMORY OF THE LIVING”

(Jun. 9, 2019) — “Good evening, ladies and gentlemen, and welcome to ‘The Pulse of the Nation,’ the mind’s pit stop to recharge the thought process to keep you on track. Roving is off for a well-deserved break and he asked me, Professor Zorkophsky, to fill in, so what better way to pass the time than to hawk my latest contribution to the Library of Congress? No doubt a rhetorical question, so we’ll just move along with me interviewing myself right here in my unbelievable office at the university. Welcome to the show, Professor Zorkophsky.”

“Thank you, Professor Zorkophsky, for giving me the opportunity to vent on subjects that normally wouldn’t come up.”

“Please address me as ‘Zork’ since we’re in my relaxing office. Here, let me show you the latest additions.”

“Impossible, but no matter. Now, moving along, what’s this pamphlet all about?”

“I’m so glad you asked me that question; I really am. The reason I wrote it is to prepare people who lost someone close to them for the stages of mourning, for one, and another is to accept the fact that the deep feeling of emptiness never ends, so why fight it?”

“Could you be a little bit more specific, Professor Zorkophsky?”

“Will do, Zork. As you know, I’m a best-selling author of numerous psychiatrist textbooks that are used in medical schools throughout the world.”

“How many languages have your books been translated to?

“Does that have anything to do with the will to live?”

“Yes, I think I know what you mean, Professor Zorkophsky. I recently lost a loved one and I was glad that they went first so as not to feel the overwhelming pain that I felt.”

“It has been said that the dead go on living through the memory of the living, Zork. On Easter Island the giant stone statues were carved honoring past ancestors. Why, just visit any cemetery or graveyard right here in the USA and you’ll see offerings of flowers, notes and all kinds of stuff. Many a family has left the bedroom of a lost child the same as it was, even decades after.”

“Are there different degrees of mourning, Professor Zorkophsky? I mean, is the death of a child’s goldfish as acute as a divorce or a spouse’s death?”

“Nothing is as final as death, truth be told. A divorce is almost the same in that maybe you’ll never learn if the ex is alive or not. Sadness is one of the universal constants.”

“So, what are you saying, Professor Zorkophsky, that there are other constants?”

“But of course, Zork. Taking pride in one’s work; professional accomplishments; a gold star won; being a member of the team that went to the top; and getting back home from a war, relatively speaking, in one piece, are all constants shared by people throughout the world.” 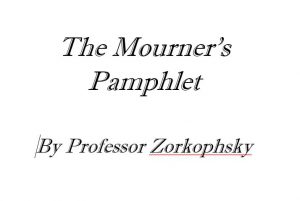 “So what’s the suggested retail price of ‘The Mourner’s Pamphlet?’”

“No price: I’m eating the cost of the printing, handling and shipping. It’s free, and for me I’ll get a good feeling if it’ll help anyone along the lonely road of, well, how to cope; I guess that’s the best that I can say it. Look, it’s not easy being alone, being really alone, and the only hope of surviving is to make it one day at a time.”

“But, Professor Zorkophsky, isn’t that the hardest part, getting up every morning and saying to yourself, ‘Well, another day without the one who was taken away?”

“For sure, Zork, and that’s the little bit of LIFE that’s lost. Look, to tell you the truth, I’ve cried every day for somebody I lost, years ago; real tears, too.”

“Is that normal? Is that healthy, Professor Zorkophsky?”

“Yes, it is normal to express sadness. Is it healthy? Yes, I have to say that awareness and empathy (for oneself) is a very real human trait and to not necessarily cultivate it but not deny it is beneficial to mental health. Keeping emotions in check is not a good thing. Let me give you an example, Zork. One of my patients believed he was married to the most beautiful woman in the world, but he never told her, so what’s the point of thinking it but never saying it?”

“Is there a moral in what you just said, Professor Zorkophsky?”

“Yes, Zork, as a matter of fact, there is: don’t put off tomorrow what you can say today, for tomorrows aren’t guaranteed. People have accidents and are gone forever: death is forever, but as long as the living keep their memory alive, there is, as they say, a light at the end of the tunnel.  Fond memories are the best transient cure that any of us can hope for, if that makes any sense.”

“Actually it does. I must say, that’s pretty profound, Professor Zorkophsky: our legacy is left to those who we leave behind. So it’s up to us to honor our dead, our fallen; is that what you’re saying?”

“Yes, precisely, which is why we pay tribute to those who fought for our benefit*, or lived as close as another can get, those to whom we have said, ‘I love you’ and received the same in return. Just remember this: for the living, moments of happiness are fleeting, so cherish the rare times when happiness is a shared emotion. Family reunions should be such a time, for instance; Thanksgivings, too.”

“Well, will you just look at the time? Now it’s that time for me to say, on behalf of Roving’s crew and Professor Zorkophsky, a goodnight to you, one and all: Goodnight.

“Well, crew, how did we do? That good?  Here, look, Roving lent me his credit card which means it’s burger time: my treat.”