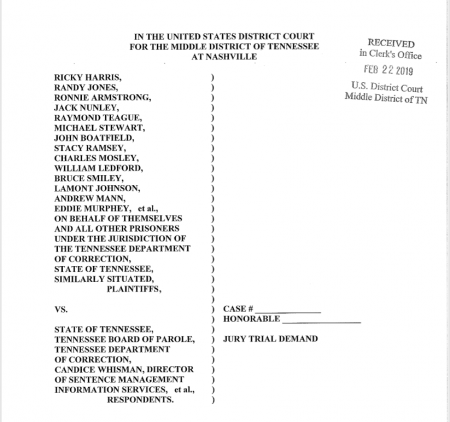 (May 20, 2019) — In February, a 58-page lawsuit was filed in the U.S. District Court for the Middle District of Tennessee by 14 inmates at the Bledsoe County Correctional Complex (BCCX) alleging that the Tennessee Board of Parole is not adhering to sentence-expiration dates, thereby extending confinement of inmates arbitrarily in an unknown number of cases.

The suit, styled Harris, et al v. State of Tennessee, et al, was filed under 42 U.S.C. 1983, “prison civil rights.”  As of this writing, no response from the defendants has been filed, according to Sharen Rooks, a Memphis-area entrepreneur and prison-reform advocate who spoke with Randy Jones, one of the plaintiffs, on Sunday evening.

A year ago, then-BCCX inmate Robert Z. Whipple, III reported that his parole was denied for years and that he believed the TDOC retaliated against him for filing legal action over that and other issues.  Included among his complaints was a lack of access to the courts through the prison law library, a claim also made in Harris.

Several days later, Whipple was released after serving seven years in prison on a non-violent drug charge.  Our last contact with him indicated that he relocated and was gainfully employed.

Over the last several years, a number of Tennessee inmates from various state prisons have told The Post & Email that they, too, did not receive parole after serving 100% of their sentences.  In one case in which we contacted Parole Board spokeswoman Melissa McDonald in 2016, inmate Jimmy Newell claimed he had served twice the amount of time required under his plea agreement yet remained incarcerated.

It appears from Tennessee’s online offender lookup tool that Newell was paroled, although the entry does not say when. 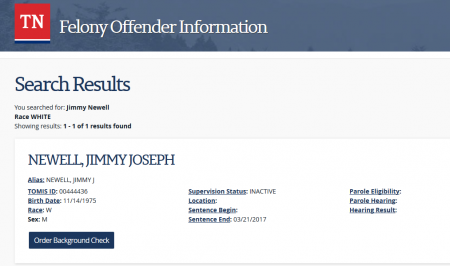 Harris was filed as a class action based on the plaintiffs’ contention that “the number of Class members is over 25,000 and the prosecution of separate actions by individuals would create a risk of inconsistent and varying adjudications, which in turn would establish incompatible standards of conduct for Defendants…” (p. 6). 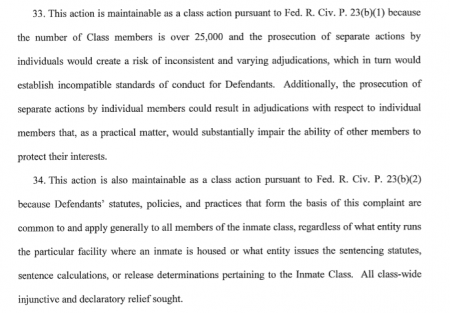 During what appears to be an exhaustive review of state laws passed and amended between 1970 and 2018 on sentencing guidelines for violent felonies, the complaint alleges on page 7 that the repeal, replacement or amendment of sentencing statutes over the years “has placed the entire correctional and judicial system in a state of crisis to the point that the T.D.O.C. has released sex offenders that have not served their sentence in accordance to state law.” [sic]

On page 26, the plaintiffs allege that the “Tennessee Department of Correction and Office of General Counsel are denying Plaintiffs access to the courts. TDOC provides one computer with Westlaw installed for BCCX-Site 2. Westlaw does not go back to the sentencing statutes and laws from 1970 to 1995. The limited statutes for this time period is listed as ‘Out of Plan’ or in PDF format where access is denied. The Plaintiffs are unaware if this is true at all TDOC institutions.”

On page 27, the plaintiffs allege that the defendants have violated their Fifth, Eighth, and Fourteenth Amendment rights, and specifically, “the right to be free from denial of equal protection, due process, and to be free from cruel and unusual punishments.”

On Monday we spoke with Rooks about her advocacy for inmates, which began more than 20 years ago after her brother was incarcerated by the State of Tennessee.  Rooks claims her brother, who is nearing the end of his sentence, was present when a murder was committed but did not participate in the crime.

“My connection with Randy Jones, who I do not know, stems from my brother.  He has been incarcerated for 25 years and is on his way out,” Rooks said.  “He also had an expiration date of March 20; it is now May 20, and he’s still there and had to go up for parole in December and again on June 13.”

In addition to running her own public-relations business, Rooks is involved in Project MI (Mass Incarceration) and The Power Complex, which seeks “to change lives by way of identifying distressed areas and reviving life within them – One man, one neighborhood, one block, one community, one city and one state at a time.”

She has visited both state and federal prisons in Florida, Pennsylvania, Arkansas, and Alabama, where she said she conducted “over 3,000 interviews” and found common issues which she does not believe are coincidental.

Regarding the TDOC, Rooks related a harrowing experience during a 2015 visit with two relatives to see her brother at BCCX about which she wrote to Congressman Steve Cohen, who represents the Memphis area.  Rooks said that Cohen’s office was responsive to her complaint, which described “racial profiling” and “illegal detainment” when they attempted to exit the facility.

As to the plaintiffs’ claim that the Board of Parole is making decisions on an inmate’s release inconsistent with the end of his sentence is some cases, Rooks said, “They’re not there to be the judge, executioner and to retry these people.  That’s not their role, but they’ve taken it to that level.”

On Monday afternoon The Post & Email contacted TDOC Communications Director Neysa Taylor for comment on the suit, who responded by email, “The Tennessee Department of Correction does not comment on pending litigation.”

The complete lawsuit and accompanying exhibits can be read here:  3-19-cv-00174