(Apr. 21, 2019) — “Good evening, ladies and gentlemen, and welcome to ‘The Pulse of the Nation,’ the ever-popular show that’s been rated in the top 100 for the last couple of years in its time slot. Hello, I’m your Roving Reporter, bringing you another exciting episode of entertainment and informative street interviews of our neighbors as they scurry to the train station. Well, we’re back under the awning, on the corner, and who do we see approaching towing what looks like three — no, it’s five — chalkboards on wheels? Why, it’s the General. Good morning, General.”

“Hand salute, soldier, always hand salute. Ever hear the expression, ‘If it moves, salute it’? Well, it’s true, and I’m moving, so salute me. Matter of fact, in your case, salute everything, even if it doesn’t move: it’s always safe to play safe, remember that.”

“I’m not going to mention you being out of uniform, am I, soldier?”

“No, the General is not because the General has more important worldly matters on his mind.”

“Yes, Sir. So what’s the General up to, towing his chalkboards down the sidewalk?”

“I’m on my way to Professor Zorkophsky’s magnificent office to diagram the closing scenes of our screenplay, ‘The Dandelion Wars.’”

“I’ve heard about that; what, exactly, is it about?”

“It’s a metaphor about life, soldier. It’s an explanation of the Flat Earth Society, is what it is, in part.” 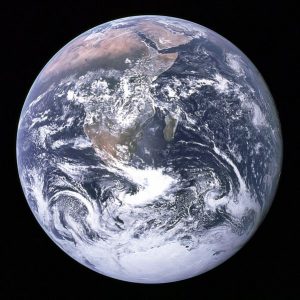 “Look at it this way: you have a group of people who believe that the land we’re standing on goes off in every direction forever, okay? They believe that the earth is flat and then someone goes into space and takes a photograph of our planet.”

“And then they show the people the photo of the earth: it’s a blue and white round ball; ergo, the earth is round, an elongated spheroid, actually, because it’s thicker around the equator. And there you have it: proof that the earth is not flat.”

“Some people believe that Trump and the Russians colluded and after all the media and government investigation, leaving no shoe unturned; think of the Mueller Report as a photo of the investigation. Can you picture that, soldier?”

“Yes, Sir: the photo of the moon disproved that the earth is flat just as the Mueller Report disproved the there was Russian collusion.”

“I’m going to do something I’ve never done, son: I’m going to promote you on the spot; think of it as a battlefield promotion. What would you like to be?”

“A General? Why, you’re not prepared to be a General; where’s your chalkboard? I don’t see any chalkboard so I can’t make you a General. What do you say I make you a Lieutenant Colonel? They’re the ones who seem to get things done.”

“Of course it’s as I wish; after all, I’m a General. Carry on, soldier. Hand salute, son, hand salute. If it moves, salute it; remember that.”

“Nonsense; why, you don’t even have a training chalkboard — you know, like that character Karl Rove carries around. Dismissed. I’m off to the university. Carry on.”

“And off the General goes, towing his five chalkboards, and off we go. And so, on behalf of the crew, I’ll be wishing you all a goodnight: Goodnight.

“Good show: the photo of the earth quieted the Flat Earthers just as the Mueller Report supposedly quieted the Russian Hoaxers. Dream on, right? I mean, what’s it going to take? Burger time: my treat.”