HOW MANY FAKE NARRATIVES WERE PUT FORTH BY THE OBAMA REGIME? 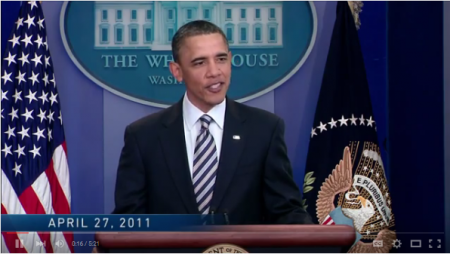 (Apr. 17, 2019) — During the first half-hour of Wednesday night’s “Hannity,” investigative journalist John Solomon broke news when he said without equivocation that the Trump-Russia “collusion” investigation originated in a meeting “in the White House” in early January 2016, fully one year before an email was exchanged among top Obama officials indicating that information about the FBI’s counterintelligence investigation into the Trump campaign would be withheld from President-Elect Donald Trump.

In conjunction with recent statements made by former House Intelligence Committee Chairman and current ranking member Devin Nunes, Solomon claimed that the FBI’s investigation into the Trump campaign began considerably earlier than the launch date identified by the agency, July 31, 2016.

If the information is accurate, the FBI’s probe of approximately 16 months, later folded into Special Counsel Robert Mueller’s 22-month investigation which ultimately found no “collusion” between the Trump campaign and Russia and insufficient evidence of “obstruction of justice,” appears to have been purely politically-motivated.

Last July, top FBI officials released documentation of a surveillance warrant application and three successive renewals on Carter Page, an informal Trump campaign advisor, on the allegation that he was serving as an agent of the Russian government during the 2016 presidential election cycle.

Another former Trump campaign aide, George Papadopoulos, claims that he, too, was the subject of a FISA warrant in 2016 after his business dealings in overseas energy production and supply were allegedly monitored by the U.S. intelligence community. Papadopoulos has also claimed that Trump’s first national security advisor, Lt. Gen. Michael Flynn, and short-term Trump campaign advisor Paul Manafort, were the subjects of FISA warrants.

In a column published Wednesday, Solomon asked ten questions which he said require answers as to the circumstances of the launch of the counterintelligence probe into a presidential campaign and which he believes could “turn the tables on Russia collusion investigators” themselves.

Hannity has said that the Trump-Russia “collusion” claims produced a “rigged investigation” and constitute the largest political hoax in American history.  However, as The Post & Email has reported over the last 9+ years, in April 2011, the Obama White House uploaded an image said to represent Obama’s “long-form” birth certificate from Hawaii which has been determined, beyond the standard of probable cause and after a 5+-year criminal investigation, to be a “computer-generated forgery.”

The birth certificate image’s alleged authenticity was reinforced by a complicit media which could have emanated from “collusion” with the Obama regime and a desire to deceive the American public.  The FBI and DOJ were irrefutably made aware of the findings of fraud and forgery but refused to investigate, as has Congress to date. 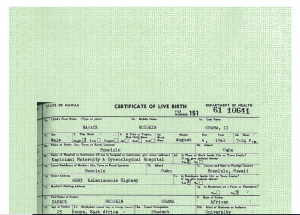 While Hannity and many of his guests have drilled down over more than two years to obtain and report the true origins of the Russia “collusion” investigation, the popular radio and television host, in addition to all others in the mainstream media, has declined to report the evidence compiled by former New Jersey detective Mike Zullo, under the authority of former Maricopa County Sheriff Joseph Arpaio, on the birth certificate forgery.

Also found fraudulent by Zullo’s team is Obama’s purported Selective Service registration form, which the agency’s then-director, Lawrence Romo, declined to investigate and refused to produce to Arpaio for inspection in 2012.

Obama’s CIA director, John Brennan, is now said to have been a point person in circulating the unverified “dossier” of allegations about Trump’s relationship with Russia, parts of which were leaked to the media prior to the election by its author, Christopher Steele.  Officials at the DOJ and State Department were also involved in funneling the information to the FBI, Hannity, Solomon and investigative journalist Sara A. Carter have reported.

After concluding the birth certificate investigation, Zullo said publicly that in his view, “all roads are going to lead to John Brennan,” now known as a virulent anti-Trump commentator on MSNBC.  Brennan proved himself incorrect after predicting, two weeks before the completion of Mueller’s probe of the Trump campaign, that Mueller would “issue more indictments.”

In a number of radio interviews over more than five years, Zullo has contended that Obama’s public life narrative is false and that evidence gleaned from the investigation shows that Obama was not present in the state of Hawaii, where he claims he was born, before the age of five.

Moreover, Zullo has reported that two U.S. intelligence agents informed him confidentially that “it’s been an open secret” in the nation’s capital that Obama was not born in the United States which, in their view, rendered him constitutionally ineligible to serve.

It was Donald Trump who in 2011 challenged the Obama White House to release Obama’s “long-form” birth certificate to prove that he was born in the United States and was presumably a “natural born Citizen,” as Article II, Section 1, clause 5 of the U.S. Constitution requires for the president and commander-in-chief.

7 Responses to "Breaking: John Solomon: Plot to Frame Trump Began “in the White House” in January 2016"