by Don Fredrick, ©2019, author of The Complete Obama Timeline

“Some (Democrat) women are idiots:” 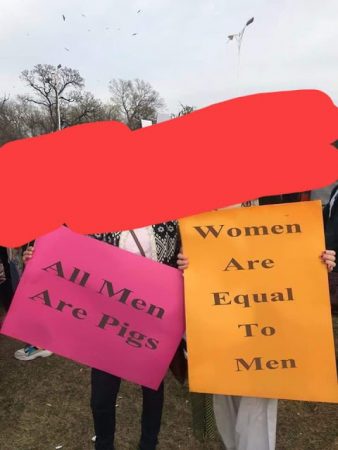 Seriously? We are not allowed to mock leftist feminists? Are they a protected species? Facebook apparently has manpower and time to waste on blocking humor. This image is certainly not “hate speech.” It is merely an attempt to ridicule (some) women.

This misuse of the label “hate speech” to censor people who do not agree with their ideology has become a routine tactic of the leftists. The left has, in fact, little actual “hate speech” from conservatives to combat. For example, few people say that women should be abused or beaten (well, except for “rappers,” who the leftists somehow find acceptable). In reality, most of the hate speech comes from the left—and Facebook and Twitter seem to allow quite a bit of it.

But notice what is going on. Democrat politicians, media leftists, and censors at Facebook and Twitter are becoming increasingly hostile to humor. Why? Because they know it is effective. They learned well from Saul Alinsky, whose fifth rule in his book Rules for Radicals was: “Ridicule is man’s most potent weapon.” Alinsky was right. Regrettably for the political left, conservatives have become increasingly good at using it. Donald Trump in particular is a master of ridicule. That is why the Democrats and media leftists are finding it increasingly difficult to spread their socialist propaganda. Calling Elizabeth Warren “Pocahontas” is effective because it reinforces the faux-Indian image people have of her in their minds. (Remember how “Low-energy Jeb” was used by Trump to destroy Jeb Bush’s candidacy?) No one will look at Adam Schiff without concentrating on his neck. Hillary Rodham Clinton literally became “Crooked Hillary” in the minds of tens of millions of voters—even Democrat voters. Joe Biden may be known as “Wandering Hands Joe,” just as Robert Francis O’Rourke is already “Crazy Hands O’Rourke” to many.

Alexander Ocasio Cortez’s absurd “Green New Deal” screamed out to be ridiculed the moment her overview and FAQs were made public. “Darling, we can’t watch TV tonight because the wind isn’t blowing!” has been one of Trump’s ways of mocking her socialist scheme. Trump has shown the cowardly Republicans how to battle the opposition. Fortunately, some have followed his lead. Let’s hope it continues. I certainly will not stop… no matter what obstacles Mark Zuckerberg’s henchmen place in my way.