“I HARDLY READ ANY FISAs WHEN I WAS THERE” 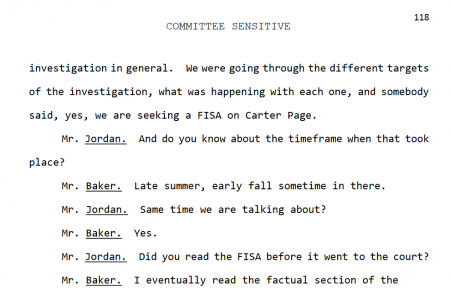 (Apr. 13, 2019) — The first of two transcripts of closed-door interviews between members of Congress and former FBI General Counsel James Baker reveals that the FBI’s counterintelligence probe into the 2016 Trump campaign had multiple subjects of interest (p. 118).

After a lengthy question-and-answer period, during which Baker admitted that “information” deemed to be “evidence” against the campaign was circulated to the FBI in unorthodox ways, Baker told questioner Jim Jordan (R-OH4) that “in a briefing about the Russia investigation in general,” “We were going through the different targets.”

To date, Page is the only individual who the FBI and DOJ have confirmed was under FISA surveillance as a result of the FBI’s probe, dubbed “Crossfire Hurricane.”  However, another informal advisor, George Papadopoulos, has claimed frequently on Twitter and in formal interviews since November that not only was Page under FISA surveillance, but also Lt. Gen. Michael Flynn, Paul Manafort, and Papadopoulos himself.

In September 2017, the now-31-year-old Papadopoulos took a “guilty” plea on a charge of lying to the FBI about his overseas meetings with Joseph Mifsud, a Maltese professor first reported to be Russian and who Papadopoulos says is now being protected by the Italian government.

Mifsud reportedly told Papadopoulos that “the Russians” had taken possession of a number of then-Democratic presidential candidate Hillary Clinton’s 33,000 missing emails from her private server utilized when she was Barack Obama’s secretary of state.

Papadopoulos has claimed that the governments of Italy, Australia and the UK participated in a scheme to undermine Trump’s presidential campaign while infiltrating its ranks with confidential informants seeking to gain or plant information, as in Mifsud’s case.

Former Cambridge University professor and American citizen Stefan Halper has been confirmed as one such informant, while Papadopoulos maintains that Mifsud, then-Australian Ambassador to the UK Alexander Downer, and members of the U.S. Defense Intelligence Agency (DIA) approached him in 2016 with the same goal.

In his own testimony to members of Congress, Papadopoulos refuted The New York Times‘s assertion that his statements made to Downer in May 2016 encompassed Clinton’s emails.

Papadopoulos claims that confirmation of multiple FISA targets will be confirmed by the release of 20+ redacted pages of the Carter Page FISA application, which many are urging President Trump to declassify. Last year, Trump said he would release the redacted material, but in a recent interview with Sean Hannity said he was advised by the Justice Department to withhold it until Special Counsel Robert Mueller completed his part of the investigation.

In May 2017, Mueller assumed the probe from the FBI after Trump fired its then-director, James Comey. In an interview on Thursday, Comey denied that any “spying,” as was claimed to have occurred on the campaign by Attorney General William Barr in congressional testimony last week, took place despite the well-known FISA warrants on Page and the emerging transcripts of key players in Crossfire Hurricane.

Other former Trump campaign aides who said they were approached with offers of “dirt” on then-Democratic presidential rival Hillary Clinton include national campaign co-chairman Sam Clovis; longtime Trump ally Roger Stone, who left an advisory role in August 2015; New York State Trump communications campaign Director Michael Caputo; and Page himself in the person of Halper through emailed offers of assistance to the campaign and an invitation to a Cambridge symposium which Page attended.

Caputo has lived and worked in Russia and the Ukraine on behalf of politicians there, including Vladimir Putin.

Halper also contacted Papadopoulos and Clovis, it was revealed last year, reportedly paying Papadopoulos $3,000 to write a paper on an aspect of his energy business.  Papadopoulos has deemed Halper a “deep state asset.” 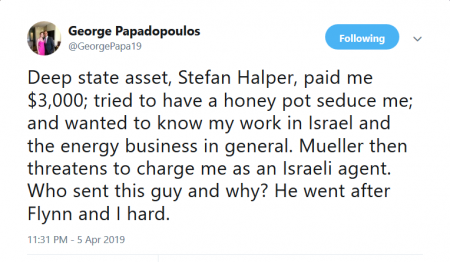 Late last month, Papadopoulos published “Deep State Target: How I Got Caught in the Crosshairs of the Plot to Bring Down President Trump.”

On March 22, Mueller turned in a report to Barr on his 22-month investigation.  Two days later, Barr produced a summary indicating that Mueller’s team found no evidence of “collusion” between anyone in the campaign and Russian operatives to affect the outcome of the presidential election.

Prior to the release of the report, the mainstream media aggressively reported that the Trump campaign had numerous ties to Russians.

Unsatisfied, many Democrats in Congress have vowed to press on with investigations into Trump’s financial dealings when he was a businessman as well as the Trump Organization’s current business practices. When Trump took office in January 2017, his two elder sons, Eric and Donald Jr., assumed leadership of the company.

Barr’s conclusions summary encompassed Mueller’s reported statement that he recommended no additional indictments. In total, Mueller’s phase of the probe indicted 35 individuals and entities, the majority of which are Russians and will likely never be tried in the United States given that no extradition treaty between the two nations exists.

Americans indicted include Manafort, who was convicted on eight federal counts last year and is serving an 81-month prison term, although none association with “collusion”; Stone, who has declared his innocence and will go to trial in the fall; and Flynn, who pleaded “guilty” to lying to the FBI. Flynn has not yet been sentenced.  Several others accepted “guilty” pleas for dishonesty to the FBI.

Papadopoulos claims that his business transactions came to the FBI’s attention in 2015, then developed into a formal FISA warrant after he joined the Trump campaign in March 2016.  Former House Intelligence Committee Chairman Devin Nunes, who is now its ranking member, has claimed in recent interviews that the FBI’s probe into the Trump campaign began considerably earlier than the agency’s reported launch date of July 31, 2016.

In a memo released February 2, 2018, Nunes wrote that committee Republicans were concerned about “the legitimacy and legality of certain [Justice Department] and FBI interactions with the Foreign Intelligence Surveillance Court.”

During the interview, Baker told Jordan that he reviewed the “factual” portion of the first Page FISA warrant application.  When Jordan asked, “And that is the normal course of business at the FBI? Not?” Baker replied, “No. I hardly read any FISAs when I was there” (p. 118).

The application was reportedly based, in large part or completely, on an unverified “dossier” of information compiled by a then-FBI confidential human source who was later severed for leaking to the media. Those submitting the dossier to the Foreign Intelligence Surveillance Court (FISC) did not inform the judges that the information was a product of political opposition research.  Under the “Woods procedures,” intelligence agents seeking surveillance warrants are required to present exculpatory evidence to the court so that it can weigh all of the factors involved.

As confirmed by his attorney during the interview and by a letter Jordan sent in January to U.S. attorney John Durham, Baker is under investigation for leaking to the media.