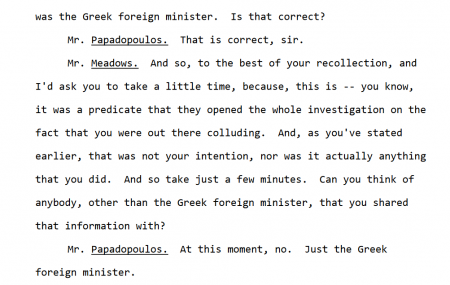 (Mar. 26, 2019) — On page 96 of the transcript of former Trump campaign foreign-policy adviser George Papadopoulos’s closed-door testimony to members of two House committees last fall, Rep. Mark Meadows (R-NC11) is noted to have said that Papadopoulos’s alleged 2016 communication with Russians while he was working in Europe “was a predicate that they opened the whole investigation on the fact that you were out there colluding. And, as you’ve stated earlier, that was not your intention, nor was it actually anything that you did.”

On December 30, 2017, The New York Times reported, “During a night of heavy drinking at an upscale London bar in May 2016, George Papadopoulos, a young foreign policy adviser to the Trump campaign, made a startling revelation to Australia’s top diplomat in Britain: Russia had political dirt on Hillary Clinton.”

Up to the time of Meadows’s revelation, questioners for the then-Republican House majority and the Democratic minority pumped the young man, now 31, about his meetings, emails, phone calls and other encounters with campaign colleagues as well as previously-unknown figures who approached him in what Papadopoulos described as “bizarre” encounters in Europe.

Between 2009 an 2013, while she was serving as Obama’s secretary of state, Clinton used a private, unauthorized server over which she sent sensitive and classified information as well as “personal” emails.  The 2015 discovery led to an FBI investigation which ultimately exonerated Clinton after she admitted to destroying approximately 33,000 emails and her aides admitted to destroying devices and other evidence during the course of the probe.

No one in Clinton’s circle was charged with a crime.  However, vulnerabilities in the server were identified, and the FBI strongly suspected that classified information was intercepted by foreign actors and likely the Russian government.

Throughout his testimony on October 25, 2018, Papadopoulos insisted that he did not recall having mentioned anything about Clinton’s emails to Downer when they met in London at Downer’s request in May 2016.

However, on April 26 of that year, Papadopoulos said he met with Maltese Professor Joseph Mifsud, who was then believed to be a Russian agent, at Mifsud’s request.  Mifsud reportedly told Papadopoulos he could introduce him to influential Russian-government officials, among those from other nations.

In an interview on “Fox & Friends” on Tuesday morning, just before the release of his book, “Deep State Target,” Papadopoulos said he was previously unable to reveal what he knew about the Russia “collusion” probe completed by Robert Mueller Friday because of his “guilty” plea for lying to the FBI during his 2017 interviews with agents and his awaiting of sentencing.

Last fall, Papadopoulos considered withdrawing his plea based on what he said was exculpatory information not provided to him by the FBI.  However, he ultimately decided to serve his sentence, which included 14 days in federal prison, which took place just after Thanksgiving last year.  The sentence includes community service and a four-figure fine.

During his testimony last year, Papadopoulos told lawmakers that the only person he told about Mifsud’s claim about Clinton’s emails was “the Greek foreign minister.”  Asked several times whether or not he mentioned Clinton emails to Downer, Papadopoulos said he “did not recall” having mentioned them during what he said was a “hostile” exchange.

Papadopoulos said he “lied” to the Trump campaign when he told them he had been introduced to the Russian ambassador (p. 86) with the goal of scheduling a meeting between Trump and Russian president Vladimir Putin.  While he said he shared what he considered to be major developments in his efforts to develop foreign relations on behalf of the campaign with colleagues Corey Lewandowski, Stephen Miller, Steve Bannon and Paul Manafort, Papadopoulos said he was not in contact with them on a daily basis.

The idea of a meeting between Trump and Putin was eventually abandoned, Papadopoulos testified.

In frequent tweets about the Russia “collusion” investigation over the last six months, Papadopoulos has said he was the subject of a FISA warrant, along with fellow Trump campaign adviser Carter Page, whose four FISA warrants have been confirmed.  Papadopoulos had suggested his testimony would reveal much about how the investigation into the Trump campaign began within the FBI as a counterintelligence operation.

Papadopoulos continues to urge President Trump to declassify approximately 20 pages from the FISA warrant applications used to obtain surveillance warrants on Page, suggesting that his name might appear therein.

He has also alleged that there was a spy inside the campaign working for U.S. intelligence.