A QUESTION OF “ALLEGIANCE”

by Don Fredrick, author of The Complete Obama Timeline 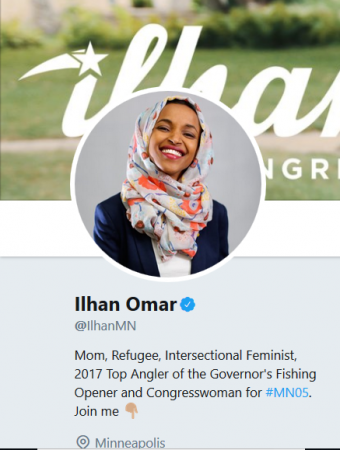 (Mar. 29, 2019) — In response to reports that hundreds of “migrant families” (i.e., illegal border crossers seeking generous benefits paid for by U.S. taxpayers) were being held in a Border Patrol parking lot because the government had no place to put them, Congresswoman Ilhan Omar (D-MN) wrote on Twitter:

“This is abhorrent and inhumane.

It’s without a doubt a reflection of what white nationalism is doing to our country. As a country, we have to acknowledge that this is how people are being treated here and decide that we are better and we must do better.”

Leftist Omar naturally claimed the situation was the result of racism. But why wouldn’t a black woman from the hell-hole of Somalia be angry at white Americans who generously welcomed her into the United States where instead of dodging bullets from crazed Islamists she would have to dodge D.C. traffic as she heads to Starbucks for a $7 caffeine fix on her way to a part-time job that pays $174,000 per year?

Note to Omar: Wanting a secure border is not racist. Americans also don’t want hundreds of thousands of blonde Swedes wading across the Rio Grande. If there were a massive invasion of Swedes, we would not know where to warehouse them either. If a temporary stay in a Border Patrol parking lot is not to your liking, stay in Stockholm. (On the other hand, thanks to the “migration” supported by Omar and her comrades around the world, Sweden has become the rape capital of Western Europe—and its “no-go zones” are arguably not much safer than Juarez, Mexico.)

No doubt some who read this will object to the argument that illegal aliens are neither welcome nor affordable because they take advantage of our nation’s generous welfare benefits. “No!” they will shout. “Undocumented immigrants are wonderful people who help the United States prosper, and the data show that they commit far fewer crimes than native-born Americans!” I call donkey fazoo on that claim. Illegal aliens are generally not entitled to welfare benefits. Illegal aliens are also not permitted to work in the United States. How then do they survive? Do they not require food, shelter, and clothing? How can they pay for those necessities if they did not cross the border with tens of thousands of dollars in their pockets? Assuming most jumped the border without wads of cash (or pre-paid debit cards funded by George Soros), they must work or go on welfare to survive. But those options require breaking U.S. laws! The illegal aliens therefore survive by working illegally for cash, or they use forged or stolen IDs to get jobs or collect welfare benefits. Those are crimes. Their only other survival option is to depend 100 percent on charity. Certainly, a percentage of illegal aliens are initially assisted by churches and relatives already in the United States, but they all eventually need work or welfare. Both require breaking the law. It is a blatant lie to claim that illegal aliens are not criminals. The reality is that they cannot survive unless they routinely commit crimes.

The arrogant Ilhan Omar labels us racists if we oppose the continuation of our destructive and outrageous immigration policies. How dare she use First Amendment rights—rights she did not have in Somalia—to excoriate the very people who were kind enough to let her into this country? How dare she complain that we are not being generous enough to people who have no right to be here in the first place?

I was born and raised in Chicago. In January 1967 we were hit with a brutal, record-breaking blizzard that shut down the city. A Chicago Transit Authority bus got stuck in the snow on our street and my parents welcomed the entire busload of strangers into our house, where they could warm up with coffee and hot cocoa and make telephone calls to let their friends and families know they were safe. Our unexpected guests lined up at our telephone to place calls. Not surprisingly, the stranded passengers were grateful that we had allowed them (and their slush-covered shoes and boots) into our home. Some even left dimes on the telephone table. (Note to young readers: In 1967 there were no cell phones; a single home telephone sat on a table; and it cost 10 cents to make a call from something known as a public phone booth.)

We also expected everyone to eventually leave! We were not going to house, clothe, and feed the strangers for days, weeks, months, or years. But I wonder what Ilhan Omar would have expected—or even demanded—had she been in that group. Would my family have been accused of bigotry had we not offered her a free fur coat? Or a new, dry hijab not covered in wet snow? Or halal-certified snacks? Would she have demanded that everyone who was stuffed into our house at that moment be silent and respectful while she engaged in one of her required daily prayer rituals?

My family believed that charity begins at home. We also understood that charity should be temporary, and that no one should be given a free federal ride throughout life. Your life is your responsibility, not that of anonymous taxpayers. Yes, we can and should be kind and help desperate people when they are in temporary need, but one million people crossing the border illegally – after a long journey they undertook voluntarily – is hardly as easy to deal with as a few dozen stranded bus passengers. There is a border crisis. It is an emergency. The solution is to secure the border, not open it up even more. A prosperous nation can perhaps afford welfare benefits. A prosperous nation can perhaps afford open borders. But no nation can afford both.

To support both welfare benefits and open borders is to place the nation at risk. But that is precisely what the leftists are doing. They want a crisis at the border. They want the system to collapse. That collapse then becomes an excuse to expand the size of government and impose new restrictions on the citizens. The tactic is not a secret. It is known as the Cloward-Piven Strategy, and it is followed by many leftists.

Calling out the tactic places leftists on the defensive. They respond by calling their critics racists. Ilhan Omar is free to hurl racist insults all she wants, but the truth is that if this were a racist nation she would still be in Somalia. Further, the words written on the base of the Statue of Liberty are only a poem, not a federal immigration statute. Although we welcome legal immigrants “yearning to breathe free,” we have no obligation to welcome and provide for millions of illegal aliens. Do not fall for the emotional argument that “one of those illegal immigrants may someday find a cure for cancer!” The same argument can be made about the 330,000 babies aborted by Planned Parenthood each year.

The laws of the United States include immigration laws, which Omar seems to think can be freely ignored. Not only does she encourage illegal immigration and oppose necessary actions by Border Patrol agents and Immigration and Customs Enforcement officers, there are accusations that she married her own brother to get him into the United States. In addition, Omar supports Shari’ah law. You may recall Khizr Khan, a Muslim speaker at the 2016 Democrat National Convention who challenged Donald Trump to read the U.S. Constitution. Khan wrote in a law journal:

“The Shari’ah-was completed during the lifetime of Prophet Muhammed, in the Quran and Sunnah. This brings up an important fact which is generally overlooked, that the invariable and basic rules of Islamic Law are only those prescribed in the Shari’ah (Quran and Sunnah), which are few and limited. All other juridical works which have been written during more than thirteen centuries are very rich and indispensable, but they must always be subordinated to the Shari’ah [emphasis added] and open to reconsideration by all Muslims.”

Khan had the audacity to question Donald Trump’s knowledge of the U.S. Constitution, despite having written that Shari’ah law takes precedence over all other laws! Khan’s belief that all laws must “be subordinated to the Shari’ah” is in direct conflict with the oath of citizenship. Khan’s oath should be considered fraudulent and he should be deported.

We also need to ask Ilhan Omar whether she places Shari’ah law above the U.S. Constitution. She has tweeted,

“To Me, the Hijab Means Power, Liberation, Beauty, and Resistance”

What is she resisting? Western civilization? The U.S. Constitution? Anyone who is not a follower of Islam?

Much of the outrage directed at Omar began in 2012, when she tweeted,

“Israel has hypnotized the world, may Allah awaken the people and help them see the evil doings of Israel.”

Despite her anti-Semitism (or perhaps because of it), Omar managed to get elected to the House of Representatives. She represents Minnesota’s Fifth Congressional District, which includes the city of Minneapolis. (More than 30,000 Somali Muslims live in Minneapolis. The Cedar-Riverside neighborhood is known as “little Mogadishu” because of the violence perpetrated by Somali gangs. The allegiances to various warring gangs apparently came with the immigrants when they traveled from Somalia to Minnesota.) Because the district is heavily Democrat, the real political contest is not the November election but the earlier Democrat primary, whose victor then handily defeats the Republican. (The district has not had a Republican representative in Congress since 1963.)

Omar supports the anti-Semitic BDS movement, which urges a boycott of all Israeli products and an end to all investments in Israel. (Imagine the screams one would hear from Omar if the United States were to boycott all Muslim nations and their products!) Omar is certainly free to detest Israel and Jews, but she should then be prepared to accept the criticism directed at her in response.

“It’s all about the Benjamins baby”

That was meant as a criticism of the American Israel Public Affairs Committee (an organization that lobbies on behalf of Israel), and a suggestion that members of Congress are selling themselves to the highest bidders. Omar apparently believes Israel should not have the right to lobby on its own behalf, even though 57 Muslim nations routinely and unjustifiably act against the Jewish state at the United Nations. The United States is often the only nation standing up for Israel. Omar later added,

“I should not be expected to have allegiance/pledge support to a foreign country in order to serve my country in Congress or serve on committee.”

Of course, no one is forcing Omar to support Israel. But she is expected to defend the United States, which is a close ally of Israel—the only democracy in the Middle East. Omar is a friend of Shari’ah-supporting activist Linda Sarsour, which naturally leads many to wonder where Omar’s allegiances lie. Many would argue that they do not lie with the U.S. Constitution. Perhaps she and Khan can both be given one-way tickets to their homelands.

16 Responses to "Should Ilhan Omar Be Deported?"