Nunes: DOJ Aware of “Plenty of People” Who Lied to Congress

“WE’LL BE GLAD TO OBLIGE THEM” 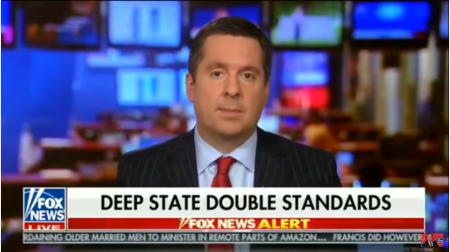 (Jan. 29, 2019) — A day after an interview with “Sunday Morning Futures” host Maria Bartiromo, House Intelligence Committee ranking member Devin Nunes told Sean Hannity of “Hannity” that the Justice Department has been made aware of “plenty of people” who “lied to Congress” in the course of several intertwined investigations spanning approximately two years.

The interview with Nunes and later, Rep. Steve Scalise (R-LA), begins at the 14:32 mark here:  https://www.youtube.com/watch?v=fLdeBpgUXlk

Nunes, previously the committee’s chairman, told Bartiromo Sunday that committee Republicans are continuing to probe the origins of the “Russia collusion” investigation led by Special Counsel Robert Mueller since May 2017, after President Trump fired FBI Director James Comey.  On Monday, he told Hannity that committee Republicans “would be glad to oblige” the DOJ by providing the names of interviewees who he says should be further investigated.

Nunes has indicated in a number of interviews since 2017 that both the Justice Department and its subsidiary, the FBI, frequently stonewalled congressional requests for documentation and that he discovered no actionable intelligence which would have justified the FBI’s launching of a counterintelligence probe into the Trump presidential campaign.  A new attorney general nominee, William P. Barr, is currently undergoing scrutiny by the Senate Judiciary Committee, with a committee vote pending next week. Barr, 68, served as George H. W. Bush’s attorney general beginning in 1991 and said during his confirmation hearings that after first declining Trump’s nomination, he concluded that he could help redirect the department toward its mission to see justice done regardless of a person’s position in life or politics.

The FBI reportedly began investigating the Trump campaign for ties to Russia on the heels of its completion of a probe into whether or not Hillary Clinton violated federal law by sending classified information over a non-governmental, unsecure email server set up in the basement of her Chappaqua, NY home while she served as Obama’s secretary of state.

As Comey announced on July 5, 2016 in a rare solo press conference, Clinton was found not to have “intended” to harm the country by using the unapproved email server, while at the same time reading a litany of actions which he said led the FBI to conclude that she was “extremely careless” in her handling of classified information.

That wording had been changed from “grossly negligent,” the standard required by the Justice Department for criminal prosecution.

It has been reported that Clinton and her aides destroyed evidence, purged 33,000 of Clinton’s emails said to be “personal” in nature, and shared classified information with individuals not cleared to see it.

On May 9, 2017, Trump fired Comey based on large part on how he handled the Clinton investigation and the July 5 presser independent of the Justice Department.

As House Intelligence Committee chairman, Nunes led an investigation into the origins of the FBI’s counterintelligence probe into the 2016 Trump campaign, fueled by the “dossier” for which the Clinton campaign and DNC paid in 2016. Assembled by former British intelligence agent Christopher Steele, the dossier alleged a number of “salacious” incidents involving Trump when he visited Moscow in 2015 and remains “unverified.”

Nevertheless, the FBI appears to have relied on the information to obtain surveillance warrants on Carter Page, beginning with the time when he served as a volunteer foreign-policy adviser to the Trump campaign.

“All of this dates back to Clinton opposition research,” Nunes said, referring to the dossier, which he said was “fed into the FBI” to launch the counterintelligence investigation.  “These people are not going to get away with this without us at least trying to hold them accountable.”

Nunes indicated that Acting Attorney General Matthew Whitaker, who told reporters Monday that the Mueller probe is likely in its last stages, signaled that he would welcome additional information on the investigation.  During his brief remarks, Whitaker said that once Mueller produces his report, DOJ officials would review it.  “We’ll be glad to oblige them with plenty of names of people who lied to Congress,” Nunes told Hannity.

Hannity rhetorically asked if those Nunes has in mind will receive the same treatment as former Trump informal adviser and longtime acquaintance Roger Stone, whose home was surrounded before dawn on Friday by 29 armed FBI agents while filmed by a CNN reporter.

Stone was charged and arrested in connection with Mueller’s Russia probe for allegedly lying to Congress and obstruction, although he was not charged with “collusion.”

Nunes said Republicans on the committee want to look into Comey’s alleged “leaking classified information” and “the Clinton server disappearing,” although Republicans no longer hold subpoena power now that they are in the minority in the House of Representatives.

Nunes said Republicans want to “get to the bottom of” various Clinton and dossier issues, to which Hannity responded, “But we never seem to get there.”

Nunes: DOJ Aware of “Plenty of People” Who Lied to Congress added on Tuesday, January 29, 2019

One Response to "Nunes: DOJ Aware of “Plenty of People” Who Lied to Congress"