Trump Agrees to Postpone State of the Union Address 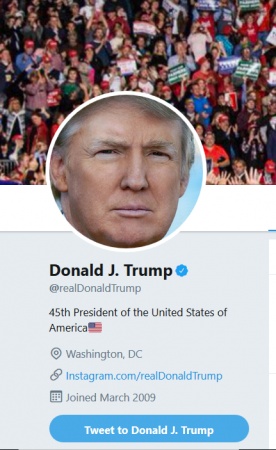 (Jan. 24, 2019) — Late Wednesday night, President Donald Trump tweeted, in response to a letter from Speaker of the House Nancy Pelosi stating that the House would not be voting on a joint resolution inviting him to give the annual State of the Union address, his agreement with Pelosi’s suggestion that the speech be given at a later date.

In a series of two tweets, Trump additionally said he will not be seeking an “alternative venue” to give the address, as had been offered by two respective state legislators and several U.S. senators after Pelosi made her “suggestion” last week.

Constitutionally, the president is not required to deliver the speech in person, and in the early years of the Republic, the president prepared a written address to Congress on what he saw as the “state of the union.”  Since the presidency of Lyndon Baines Johnson, however, the address has been televised among much pomp and circumstance, with tight security protocols in place.

When Pelosi asked that a new date be agreed upon once the partial government shutdown ends, she said her concerns for January 29 rested with “security” given that parts of the Department of Homeland Security (DHS), which includes the Secret Service, are furloughed or working without pay.

The White House and DHS immediately responded that “security” was not a concern for the event, if it went forward as scheduled.

On Wednesday, Pelosi sent the White House a letter stating, in part, “I am writing to inform you that the House of Representatives will not consider a concurrent resolution authorizing the Presidents Stated the Union address in the House Chamber into government has opened.”

The shutdown, now over a month old, came about at midnight on December 21, 2018, when Congress and the White House were unable to agree on an appropriations bill containing the $5.7 billion Trump wants to build a wall along the southern border. At the time, the US House of Representatives was in Republican hands, and that body ultimately passed a bill containing the funding. However, the U.S. Senate must have 60 votes to pass an appropriations bill, and at the time, with 51 Republicans, Senate Majority Leader Mitch McConnell did not hold a vote on the House’s last-minute measure.

A Senate-passed bill in December which would have provided funding for closed government agencies through February 8 did not contain border-wall funding and was rejected by Trump.

Following the 2018 midterm elections, Republicans gained two seats in the upper chamber but still lack seven seats to assure a 60-vote majority. It is unclear if any Senate Democrats might vote in the affirmative on two different proposals on Thursday afternoon intended to “reopen the government” and incorporate a series of compromises Trump offered in a nationally-televised speech last Saturday afternoon.

Trump has said he will not retreat from his position that a wall or barrier needs to be constructed along the US-Mexico border to stop or greatly reduce the flow of illicit drugs, illegal aliens and possibly terrorists entering the United States. For her part, Pelosi has said she is unwilling to approve any bill containing funding for said construction, as she believes it to be “immoral.”

Pelosi was likely referring to six appropriations bills passed in the chamber on Wednesday aimed at reopening shuttered government agencies but without funding for a border wall.

On Wednesday, Trump appeared to coin a phrase for his 2020 reelection campaign combined with his apparent claim that he will see the construction of a border wall to enhance national security. 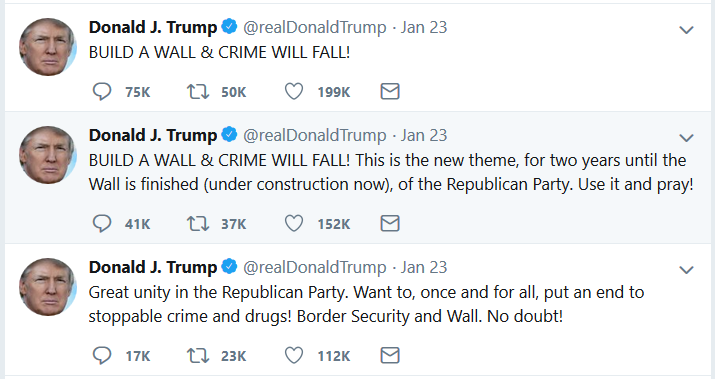 On Wednesday afternoon, responding to Pelosi’s latest correspondence, Trump said of the State of the Union, “We’ll do something in the alternative.”

At approximately 8:40 a.m. Thursday, Trump repeated his claim that “there cannot be safety and security” for the U.S. without a border wall.

Trump Agrees to Postpone State of the Union Address added on Thursday, January 24, 2019