WHAT IS THE SOLUTION? 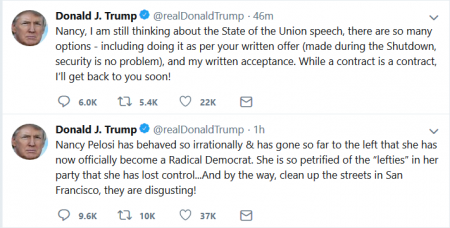 (Jan. 20, 2019) — Before 9:00 AM EST on Sunday, President Donald Trump first tweeted about Speaker of the House Nancy Pelosi, then directly to her.

At approximately 8:42 AM, Trump wrote, “Nancy Pelosi has behaved so irrationally & has gone so far to the left that she has now officially become a Radical Democrat. She is so petrified of the “lefties” in her party that she has lost control… And by the way, clean up the streets in San Francisco, they are disgusting!”

Trump did not say whether or not his assessment related to Pelosi’s dismissal out-of-hand of his proposal containing concessions on DACA and TPS recipients in exchange for $7.5 billion for the wall he wishes to build and increased security in the forms of manpower and technology to better secure the U.S.-Mexico border, delivered in the form of a national address from the White House’s Diplomatic Reception Room.

An impasse over Trump’s demand for border-wall funding and Congress’s failure to pass a bill containing such a provision resulted in a partial government shutdown at midnight on December 21, 2018, now in its 30th day.

As elements of his Saturday-afternoon speech leaked out prior to its delivery, Pelosi’s office issued a statement rejecting the proposal on behalf of the U.S. House of Representatives, of which she is the new Speaker.

As has been reported by mainstream sources and others, the city of San Francisco has been experiencing rising homelessness, drug use, and a growing sanitation problem for several years amounting to a public health crisis.  Pelosi represents California’s 12th congressional district, which includes San Francisco.

Trump issued another tweet approximately 20 minutes later addressing Pelosi directly about her request that he “postpone” his delivery of the annual State of the Union address in the chamber of the House or to submit his assessment “in writing” stemming from alleged “security concerns” due to the partial government shutdown. “Nancy, I am still thinking about the State of the Union speech, there are so many options – including doing it as per your written offer (made during the Shutdown, security is no problem), and my written acceptance. While a contract is a contract, I’ll get back to you soon!” Trump tweeted.

On January 3, 2019, after the 116th Congress was sworn in, Pelosi had extended the customary written invitation to Trump to present his State of the Union address in the chamber of the U.S. House of Representatives on January 29. While Article II, Section 3 of the U.S. Constitution calls for an “information” on the “state of the union” from the president, it has been televised since the presidency of Lyndon Baines Johnson.

Trump had sent Pelosi written acceptance of her invitation.

Also on January 3, Pelosi pledged “nothing” for a border wall or barrier.  “We have better use of funds to protect our border,” she told NBC News.

On Saturday Pelosi issued her disapproval of Trump’s yet-to-be-made proposal in which she stated that “Democrats support smart, effective border security solutions” and that Trump should “reopen government” in order to continue border-security discussions. 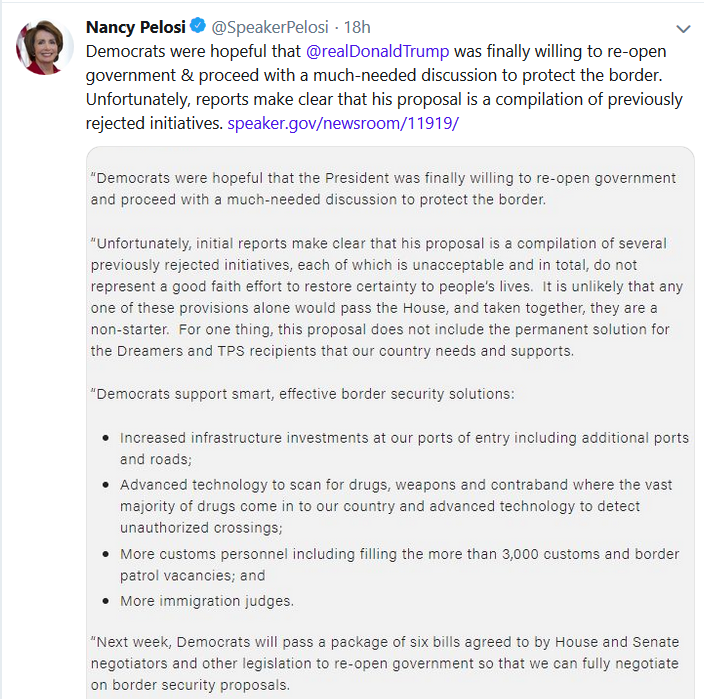 On Thursday, Sen. Rand Paul (R-KY) suggested that Trump’s State of the Union speech be given in the chamber of the U.S. Senate, an idea put forth by The Post & Email’s own Joseph DeMaio earlier that day.  Paul’s proposal has support from some House and Senate Republicans.

Two state lawmakers from Michigan and North Carolina, respectively, have extended invitations for the president to deliver his speech from those locations.

On Thursday evening, Trump denied Pelosi military transportation to a trip she planned to take to Brussels and Afghanistan along with other congressional Democrats.

In direct response to Trump’s initial Sunday tweet, Pelosi wrote, “800,000 Americans are going without pay. Re-open the government, let workers get their paychecks and then we can discuss how we can come together to protect the border. #EndTheShutdown.”

Pelosi additionally criticized Trump for failing to show “any sympathy” for those affected by what she deemed “the #TrumpShutdown.”