“I MISS MY FRIEND” 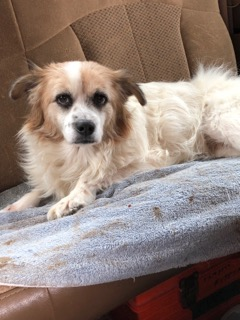 (Jan. 20, 2019) — “Good evening, ladies and gentlemen, and welcome to every thinking person’s favorite show: ‘The Pulse of the Nation.’ For you longtime viewers, I’m sure you’ve recognized that we’re back in Professor Zorkophsky’s office here at the university for yet another book review. Welcome to the show, Professor.”

‘Please, Roving, call me ‘Zork’; I see no need to be so formal in my cozy surroundings. Take this chair, for instance: it’s also a lounger. If I push this button under the left armrest, a mini-microwave pops out; and then we have the mini refrigerator; massager; M&M dispenser; soda fountain; room to chill a beer keg; and, look here: a joystick for ease of maneuvering, see? I can turn a 360 if I so wish: watch.”

“Was that a license plate I saw on the back?”

“Me; I mean, my body is the power source. It senses the heat my body produces and converts it to electrical energy; same with my movements. First, it detects any minute movements, from heartbeat to the blinking of an eye, even the effort to strain to hear better, believe it or not. It flies, you know.”

“Well, you got me there. What do you say we talk about my new book: ‘The Sequel: Too Numerous to Mention,’ okay? Let’s do some old-fashioned hawking.”

“Sure thing: that’s why I’m here, to talk about your latest best-seller. By the way, how come it isn’t ‘Too Numerous to Mention: the Sequel’?”

“Search me. As you know, ‘Too Numerous’ was made into a movie.”

“It made our money back.”

“Whatever made you think guys suffering from PTSD could be made into a comedy?”

“That was a mistake, I have to admit, although there were some light moments.”

“Good opening since it’s about time and how we view it. In the long run, the hour hand can be for or against you, when you think about it.”

“Now there’s an idea: let’s think about it. What do time and PTSD have in common?”

“The idea is that the more time goes by, the less the symptoms of PTSD are apparent, which is incorrect. And it’s wrong. Time may not be a friend here: symptoms may get worse.”

“Chapter ‘4: The Spies’ was quite fascinating. What was that all about?”

“Well, for someone who’s never been there, it reads like this: many of those who come back experience ‘culture shock,’ which is a feeling of alienation. The character in my book – based on a real-life session — came back into a different world; I mean, he actually thought it was a whole different planet, he was so far out there.”

“True story. He couldn’t go to anyone for help, could he, since he knew everyone was a spy? They were all spying on him.”

“Everyone except his dog, who aged 30 dog-years, yet still remembered him but then the dog died and so did his one anchor into reality.”

“So he never really was on a different planet, was he?”

“But he wasn’t convinced?”

“And the VA is still trying to shove pills down his throat.”

“No, which is why he’s one of my normal patients, believe it or not.”

“So, let me get this right: you wrote a sequel to your bestseller about time, and now you’re telling us that there’s no cure for PTSD? Is that the truth of it?”

“That’s the truth in a nutshell: there’s no cure, only management, so manage it, which is what I tell my patients.”

“So they’re nuts? By the way, you use the word ‘nuts’ throughout the book. Is ‘nuts’ an accepted psychiatric term?”

“Yes? Care to elaborate a tad?”

“No. Look, I don’t want to be rude, but the only cure is love. But I want to say this: a service dog is worth all the pills the VA ever had or ever will have. And if a PTSD sufferer isn’t allowed to have a service dog, an emotional companion, then maybe the VA should spend the money on, instead of pills that don’t work, finding some housing for the Vet and his dog that does work.”

“Well-said, Zork, and thank you for your latest book to help our combat-damaged troops. And that’s it for this show and so, on behalf of the crew, I’ll be wishing you all a goodnight: Goodnight.

“Good show. Hey, Zork, join us for burgers: my treat.”

[Written in fond memory of my service dog, Ginger, who died on the 11th day of January, 2019, on the 11th hour, at the 11th minute: it’s just how it worked out, as unbelievable as it sounds, and I sure as heck wouldn’t be making it up. When Ginger was about 3 years old we were at a laundromat and a retired couple said they’d pay me $1,600 for her, so I was thinking about winning the Lottery the other night: would I want the money or my dog back? I miss my friend.]

One Response to "The Zorkophsky Report #3 (RR)"