(Jan. 12, 2019) — On Wednesday The Post & Email spoke with Memphis, TN resident Lillian King, whose husband, Antonio King, has been incarcerated in the Shelby County jail since April of last year on what she says is the false charge of aggravated robbery.

Shelby County includes the city of Memphis and comprises Tennessee’s 30th Judicial District, on which this publication has reported over the last 2+ years.

A story we covered in November from former Shelby County Sheriff’s Office deputy Earley Story appears to indicate that corruption within Shelby County government dates back more than 20 years. In an email on Friday, Story said he continues to work to expose the false charge which perpetrated his own arrest in 1997.

After his case was dismissed by a judge, Story said, he was rearrested the same day on an identical charge.

In another case, Celitira Watson and April Malone were falsely charged after text messages they exchanged with Kendrick Watson were picked up by police surveillance and altered by unknown parties.  Alteration of the messages was proved by a Google backup of all of Celitrai’s texts and emails, the presentation of which resulted in the release of both women from the list of defendants.

Celitria Watson and Malone went on to file a federal lawsuit against the Shelby County prosecutor’s office and members of the Memphis Police Department (MPD) for their false arrests and its consequent results, they said.

Police reports show that Robert Macklin claimed that King robbed him at gunpoint on the morning of Sunday, September 3, 2017.  A second charge against King of “possession of a firearm in the commission of a felony” was dismissed for lack of probable cause, Mrs. King told us and criminal court records show.

In late September 2018, King was indicted by a grand jury, although the record does not say on what charge.  Mrs. King confirmed that the indictment occurred on the “aggravated robbery” charge.  On October 4, he was arraigned from jail, records show. 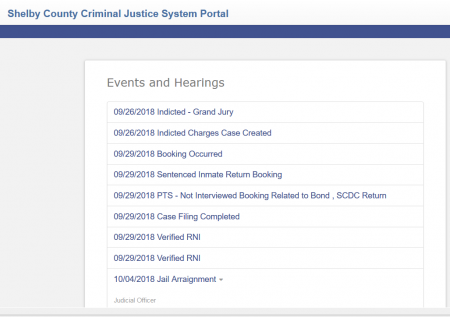 King is also noted in court records and the arrest warrant as “Anthony Jones,” which Mrs. King explained stemmed from a name change initiated by his father.  She provided The Post & Email with a scan of her husband’s birth certificate bearing the name “Antonio King” with a birth date matching that on record with the Shelby County Criminal Justice System.

Mrs. King said she was a passenger in the car her husband was driving last April 21, when a Memphis police officer stopped them for a cracked windshield, ran the license plate, and returned to say there was a warrant for King’s arrest for a robbery from the previous September.

She said he was placed in the back of the police cruiser without incident, booked into the jail, and is awaiting a hearing to reduce his $100,000 bond.  Mrs. King understands that a January 28 court date will not encompass that issue.  “We’re asking for a bond hearing,” she said.  “His bond is $100,000.  He has to have a bond hearing for them to reduce it, and we’re going to see if we can bond him out once they have the hearing.”

Mrs. King said she visits her husband “every Sunday” and that he “is ready to come home.”  She said she can vouch for her husband’s innocence since at the time the robbery allegedly took place, she and her husband were at home.  “I know for a fact that my husband did not rob this person; it’s all lies and there is no proof that he did anything,” she said in an email prior to a Wednesday interview.  “The police didn’t do any investigation about this robbery. When my husband got arrested they didn’t read him his rights so to me the D.A. knows that this is a false arrest case.”

She said that neither she nor her husband has been questioned by investigators.

The Sixth Amendment to the Bill of Rights states:

In all criminal prosecutions, the accused shall enjoy the right to a speedy and public trial, by an impartial jury of the State and district wherein the crime shall have been committed, which district shall have been previously ascertained by law, and to be informed of the nature and cause of the accusation; to be confronted with the witnesses against him; to have compulsory process for obtaining witnesses in his favor, and to have the Assistance of Counsel for his defence.

“Robert Macklin didn’t like my husband and went down to the police station and filed a false report,” Mrs. King said.  “He said my husband took $300 and his wallet and pointed a gun at him.”  She also said that Macklin described to police a suspect not meeting her husband’s appearance and build and that he provided a different description during a preliminary hearing in the case.  “They were looking for someone with dreadlocks, and my husband doesn’t have dreadlocks,” Mrs. King said.

Shelby County’s district attorney general, or chief prosecutor, whose authority encompasses Memphis, was identified in a Harvard University-commissioned report by the Fair Punishment Project last year as ranking the highest in the areas of “misconduct” and “reversals” among Tennessee’s 95 counties and all prosecutors in the states of Tennessee, California, Louisiana and Missouri for a recent five-year period.  Amy Weirich additionally garnered national attention as a result of her conduct in the Noura Jackson case, for which she received a “private reprimand” from the Tennessee Supreme Court in 2017.

“At the preliminary hearing, the accuser said something different than he had to the police,” Mrs. King told us. “He described my husband as a totally different person at the preliminary hearing.”  Mrs. King said she is attempting to obtain a copy of the hearing transcript but has heard nothing from her husband’s attorney, Lee A. Filderman, on the progress of that request.

Her husband has a criminal history, Mrs. King said, including two years spent at the Shelby County Correction Center for an assault charge arising in 2003, before they met.  He was also on probation for a domestic violence event in which she called police, Mrs. King said, and which she said expired during her husband’s recent incarceration.

We asked Mrs. King if domestic violence was an ongoing problem following the incident, to which she responded, “No.” 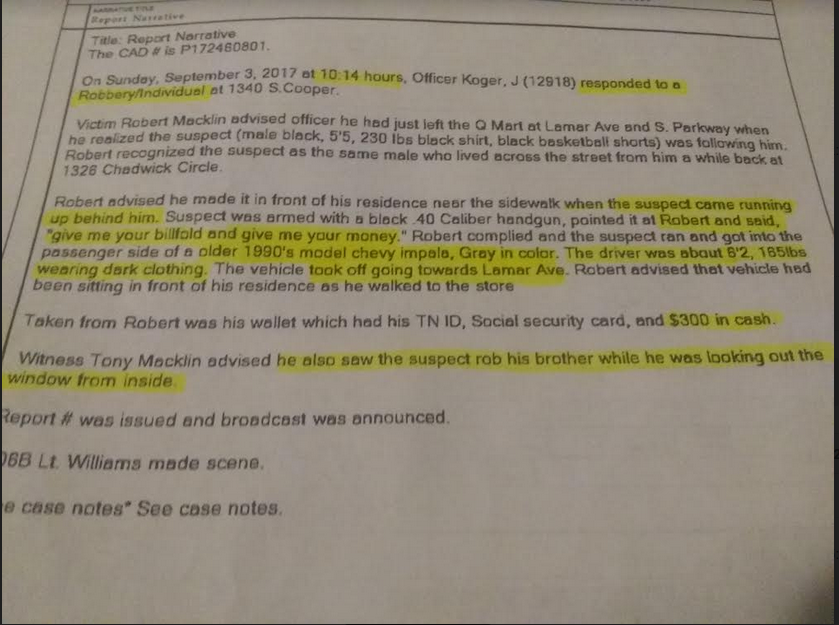 Mrs. King concurred with Robert Macklin’s statement to Koger that she and her husband once lived “across the street” from Robert Macklin but had moved before the alleged incident occurred.  She said that while they resided in the neighborhood, there had been no conflict between them and Macklin and that they never spoke, waved to one another, or became acquainted.  “We just knew him by face,” Mrs. King said.  She believes “jealousy” might have prompted Macklin to file the alleged false charge, she said.

As far as the firearm allegedly used in the incident, Mrs. King said, “They don’t have anything.  They’ve brought up old charges which have nothing to do with now.”

A police summary indicates that the Macklin brothers were provided a ride to the Memphis PD “Airways” station on September 5, 2017, to answer questions for investigators. 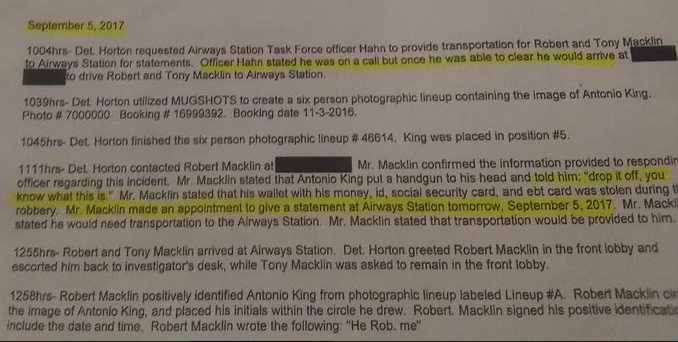 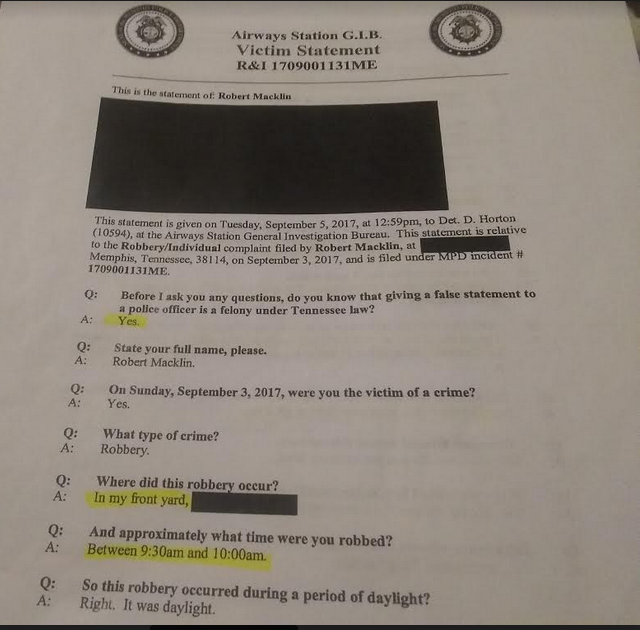 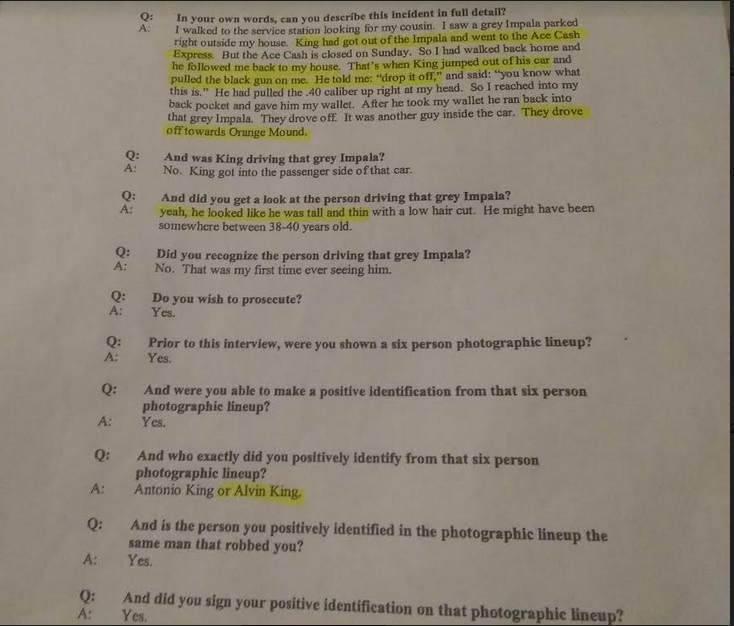 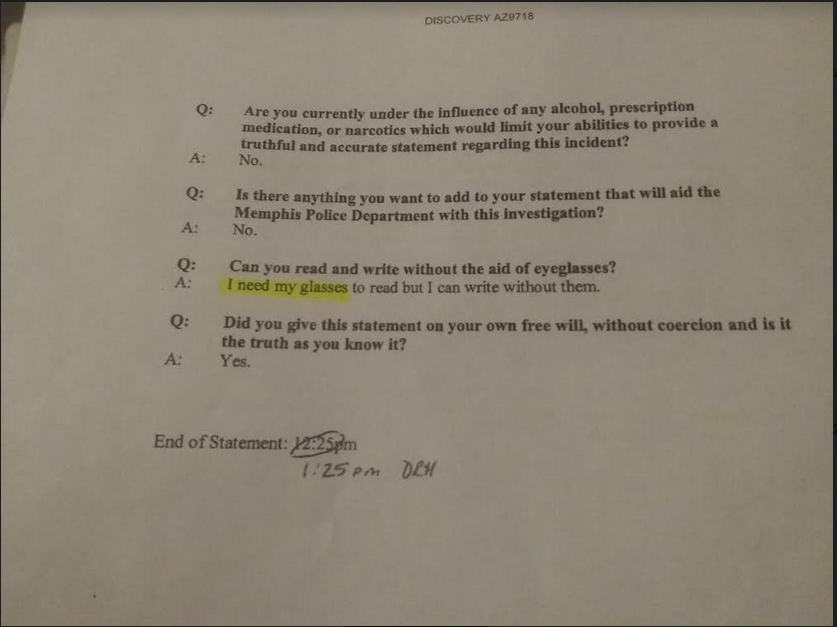 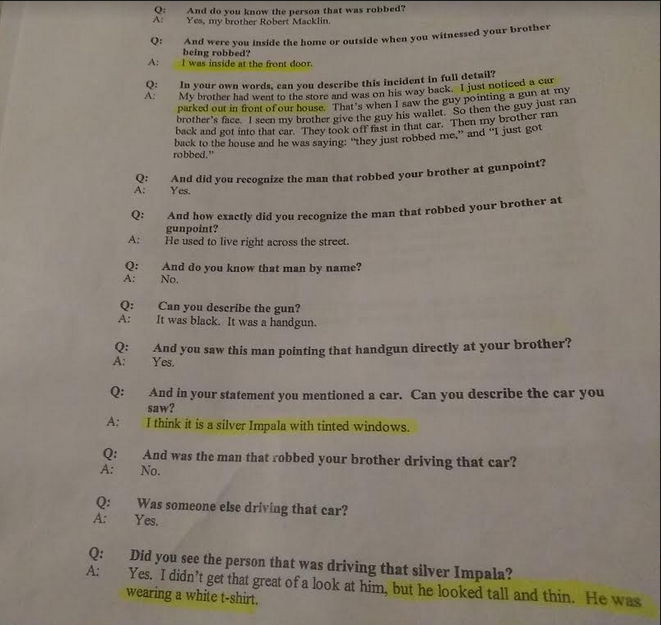 An undated “discovery” document states that “Officer changed location to 1316 S. Cooper due to Robert advising this is where the suspects family lives at.  Officers talked with the mother at the residence who advised she only has one son, Other – Antonio King.  Antonio fits the description the suspect use to live at.” [sic] 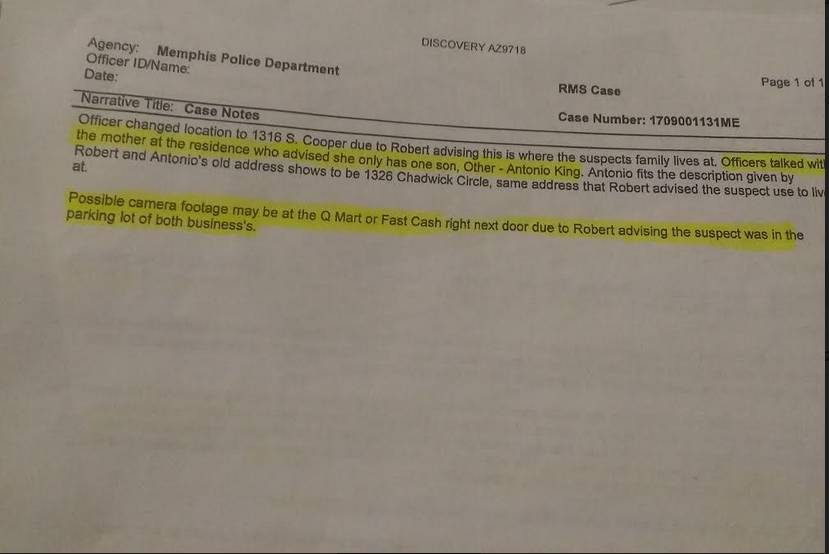 The warrant for King’s arrest states Macklin’s address, where the robbery allegedly took place, as “1340 S. Cooper.”  However, since the Kings lived across the street from Macklin, their house would presumably have had an odd number assigned to it. 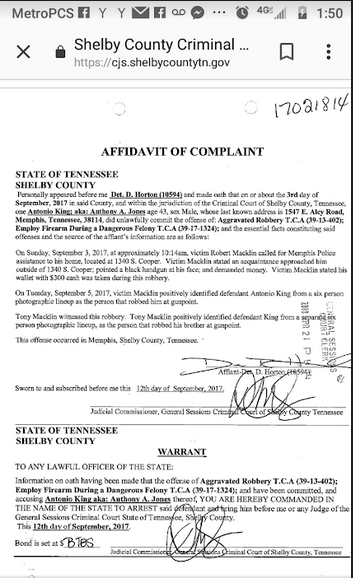 The Post & Email spoke with Antonio King’s mother, Lizzie Jones, who said she lives “down the street” from where the robbery was said to have occurred.  She said when police arrived at her home to question her about the incident that Sunday, they asked if her son was there and and said that he was accused of committing a robbery. She said she then told them, “He ain’t been here to rob nobody.” She also said the description of the person they provided her did not match her son’s appearance, which she said she showed them on her phone.

The charge of “Employ Firearm During a Dangerous Felony,” a violation of state law TCA 39-17-1324, is shown as “Dismissed” on the court record. 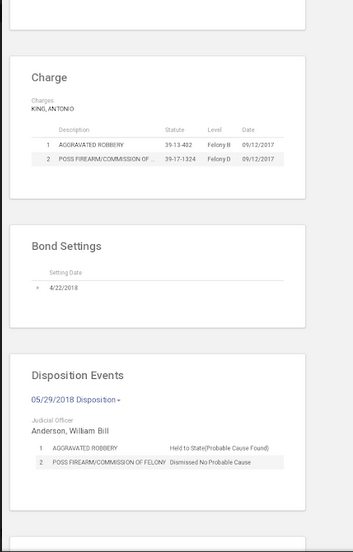 “Aggravated robbery” is not listed as one of the “dangerous felonies” covered by the law. 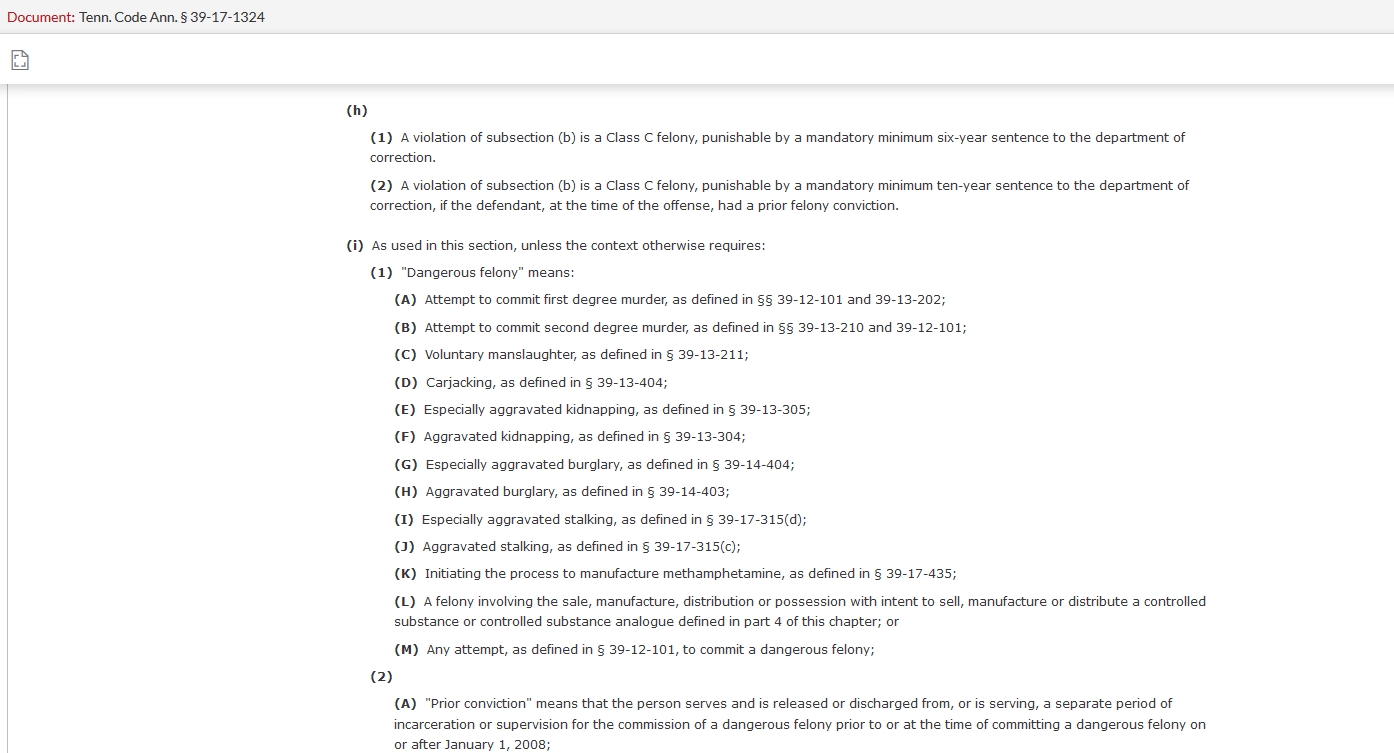 As of now, Mrs. King said of her husband, “they’re offering him eight years [in prison].”  “The attorney told my husband he should take the plea deal or go to trial.”

Memphis, TN: Will There Be Justice for Antonio King? added on Saturday, January 12, 2019