“THE PATHWAY TO TOTAL DESTRUCTION” 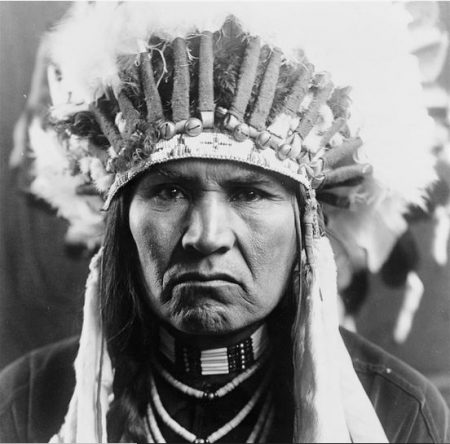 (Jan. 8, 2019) — “Good evening, ladies and gentlemen, and welcome to a special edition of ‘Pulse of the Nation,’ being broadcasted from the stage of the auditorium here at the university. Roving is up in the balcony and will close the show, but for now I’ll thank the audience for the pleasant welcoming applause: thank you. Just as I, Chief New Leaf, did a couple of years ago, tonight’s talk will be the American Indian’s point of view on the State of our Union, but to be totally accurate I’ll be pointing out the hypocrisy between the stated and the reality.

“Please sit back and get comfortable while you listen to my words. It is the time of a great feast and all the tribes are meeting for a pow-wow, which is the biggest event on a tribe’s calendar. You, as my guests, are under my protection so you can relax while you contemplate your place in your tribe*, your place here at this pow-wow**, and your place in the Great Spirit’s  tipi***. Please listen to our welcoming song.”

“You are you by either accident or Fate.  You could’ve been born any other mammal, but because you were born a human being you owe a sense of responsibility to the other mammals that live in the forest or on the plains. But the white man, in his quest for ‘getting ahead,’ does not practice this sense of stewardship. We used to marvel and wonder with awe why you people are in such a hurry to stop at a red light, but we wonder no more because we have learned that even you do not know. We think that whatever endeavor you start you want to be finished even before it’s started, something that we constantly marvel at.

“Time is certainly an interesting phenomenon, which is why we venerate our elders, the people who have witnessed the change of seasons for many decades. Today’s white elders have been glued to the television throughout their lives.  They have replaced reading with watching; participation with being a spectator; and have lost a sense of accomplishment by accepting Socialism as the panacea for the world’s ills. Nothing can hurt a group of people more than to support slovenly behavior: pride goes out the window and there is nothing that replaces it.

“You make super-highways yet leave no avenue for raccoons to cross, or caterpillars. You build buildings that don’t make any sense energy-wise. You have a great railway system but don’t take advantage of it. You waste more than you consume. And you have the audacity to leave your failings to the next generation and, no, I won’t even mention spent nuclear reactor fuel rods. And now it’s time to listen to another song.”

“America used to have three great buffalo herds, some say four: they are no more. Migrating birds used to block out the sun and turn day into night, but no more. And you call living in a maze ‘progress’ and unabated birth levels acceptable, but I want you to look at what happens when you have too many people living too close together: you have concrete blocks of apartments where it’s nothing more than people living separate lives with no social adhesion, each a separate lifeboat going over the falls alone. You have abandoned people with abandoned principles. You also have people who’ll spout off by telling everyone it is they who have the answers; people who don’t know any better supported by people who don’t know anything: a sure receipt for disaster if there ever was one. History is replete with examples of failed Pied Pipers, the most recent in Venezuela and then back in time to Cambodia and Uganda and further back to Nazi Germany. The pathway to total destruction is quite predictable and our wise people say the likes of Cortez, Bob O’Rourke, Pelosi, Sanders, et al, use the same formula Hitler used to such infamous success: the philosophy of the schoolroom in one generation will be the philosophy of the government of the next****.

“We live in perilous times when logic and facts mean nothing compared to righteous indignation towards honesty and thrift. We are confronted with people who don’t know the facts yet remain adamant in their belief that their side must be right as long as it doesn’t agree with these truths: Socialism has never been successful, it is not successful now and deductive reasoning guarantees that it will not work in the future, ever. The problem lies in the ignorant disbelieving that it’s too late to turn back the clock: sinister forces must complete the cycle for the whole scenario to repeat itself, all because of the inability to separate truth from fantasy. The walls will surely come tumbling down; problem is, the enlightened ones will perish along with the Democrats, the ones who caused the whole mess in the first place. I will end my talk with a song.”

“And there goes the Chief off the stage as the lights brighten. Roving here with the crew up here in the balcony. I must say we always enjoy the Chief’s talks and we did so again tonight. Again the Chief got a very respectable applause at the end, which is my cue to wish you all, on behalf of the crew, a goodnight: Goodnight.

“Good show. Let’s find the Chief and grab some burgers: my treat.”

[****Quote attributed to Abraham Lincoln: makes one concerned about the many Ward Churchill type of anti-Constitutionalist teaching in our schools.]