“HOW IMPORTANT IS THE WALL?” 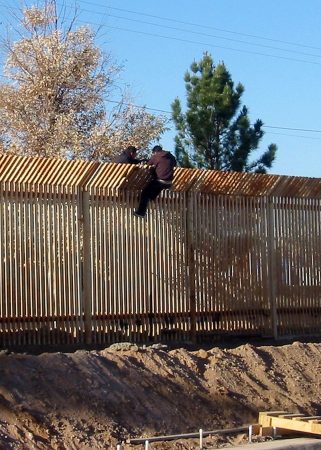 (Dec. 22, 2018) — “Good evening, ladies and gentlemen, and welcome to ‘The Pulse of the Nation,’ the place to rest your mind, find peace of mind and a refuge for encompassing solace for the soul.”

“Excuse me, Roving, but that’s a little thick. How about toning it down a notch?”

“That, friends, was Chief New Leaf, throwing his two cents into the mix. Hello, my name is Roving and I’ll be your host for this episode of ‘Pulse,’ the informative news show. That better?”

“Better. I’m off to the Southern Nevada Veterans’ Memorial Cemetery in Boulder City, NV, to pay respects to someone I admired, respected and loved. I’ll send a postcard of a slot machine. Bye.”

“And off he goes in his RV bus. As you can see, we’re back on our favorite corner, under the awning, across the street from the railroad depot, and we’re looking for someone to waylay and interview but there’s no one in sight. What do you say we give a call to Professor Zorkophsky and ask him about the wall?

“The wall is but s symptom of the previous failures of past administrations, I’m sorry to say. Under Eisenhower we issued green cards for migrant crop pickers, but when they overstayed we didn’t do anything about it – ignored the problem — and it just snowballed from 1960 until now: out-of-control mayhem is what we have. Why, we have generations of illegal immigrants living among us, breaking the law every minute of every day, and they know it because they’re living it; which is what they think of us, by the way: no respect.”

“You know, you’re right: some of them have been here for generations; they know they’re illegal yet don’t give a hoot, right? Never once making the effort to become legal immigrants.”

“That sums it up in a nutshell; couldn’t have said it better myself. Look, these people look down on us as being pushovers, and you know what?”

“They’re right. We are a nation of pushovers. Look what we do: we reward them for being here illegally. We give them housing, money, food and even a college education. They get treated better than our homeless Veterans, believe it or not.”

“So what can we do, other than the wall?”

“Here’s the deal: if we would’ve enforced the immigration laws from the get-go, we wouldn’t be in this mess; we wouldn’t have any need for a wall, now, would we? No, and it’s because we have been negligent in doing what we all believe in: America’s well-being with everyone safe and her chance of continuing as a country with one language based on the philosophy of the Judeo-Christian moral compass for Western Civilization to live by.”

“So what happened? When did we fall off the common-sense wagon?”

“The day that the Democrats realized that Welfare payments, Food Stamps and Social Security-Disability benefits can buy votes.”

“Well, thank you for helping us fill in the empty time between commercials, of which we’ll have one now.”

“And we’re back here on our corner and look who’s back: it’s our favorite General who pushes his blackboard on wheels down the sidewalk. Hey, General, Sir, back so soon?”

“You got the ‘Sir’ right, son, so I won’t say another word about the rest of it.”

“If I were a smart-aleck, I’d ask what you mean, but I won’t, because I’m not. I’m not going to mention anything about the ‘uniform, coming to attention and hand salute’ or, for that matter, anything I did when I was in the military.”

“You know, I’m on your side. The Army hasn’t been the same since that usurper, Barry Soetoro, aka Barack Obama*, took over as Commander-in-Chief and really did us harm. Remember Obama firing some of our troops while they were deployed in a War Zone? They were ‘red-tagged,’ remember? And who ever heard of arresting our guys for killing the enemy?”

“I think it all stems from Muslims in our military; the mindset of the Obama/Hillary lovers in the military; and the overall tone of the Trump Derangement Syndrome, which is a real and present danger that lurks as a cancer that has spread throughout the Pentagon.”

“You said it. Couple of weeks ago I was visiting a friend at Fort Fumble** and I was wearing my MAGA hat, which didn’t go over that well. Got a lot of nasty looks.”

“When you should’ve been high-fived through the roof.”

“That’s true. But the reality is that there’s lots of unqualified people making the rules, rules that are destructive to the efficiency and morale of the troops.”

“What about the guys in prison for doing exactly what they were supposed to be doing, such as killing a Muslim bomb-maker?”

“They should be pardoned immediately; the same for LTC Terry Lakin, and not a minute longer. If you’re going to be a leader, then lead.”

“So what do you think about Trump?”

“Kick the Muslims out of our military, let alone our country. As I said, if you’re going to be the head honcho, act like one.”

“You know, if we had the same ROE’s — wait, let me start over: if we had the same military prosecutors who are as hell-bent on going after the troops who are actually doing the real fighting, I’d be in prison and so would a lot of other guys, I guess for using knives instead of issuing a written warning: ‘Excuse me, but we want to go home and we don’t trust you to not shoot us, so what we have planned is to sneak up on you, kill your sentries silently by using knives, and then wiping each and every one of you out with bullets because, if we don’t, one of you may run off and tattletale on us and we can’t be having that.’ Anyway, that’s the way I see it.”

“And I agree. Remember that movie where, at the beginning, they run across a young boy — a goat-herder, I think he was — and they didn’t kill him. So you had basically the same situation in Vietnam and did kill him***, is that right?”

“And here I am, General. I want to share a thought with the viewers at this time. You see, I’ve been thinking about Jesus:  you know, the birth and his life, but most of all about the crucifixion and how they beat him. I mean, here’s a guy who never hurt anyone; all he did was go around helping people any way he could, and he ended up being, basically, beaten to death. I mean, by the time they crucified him he was pretty far gone by then. Well, to make a long story short, I’ve been thinking, if I could, I’d trade places with him.

“No, I’m serious. I’ve lived long enough to know that I’m not worth much, not compared to Jesus; you know what I mean? I used to contemplate, if I had a time machine, of going back and somehow stopping it all, maybe by making the crowd understand that it’s in everybody’s best interest to crucify Barabbas and set Jesus free, but I guess that would interfere with the message. And I’m not talking about me rising on the third day, you with me? I wouldn’t do any rising, but Jesus would, but not like 30-100 years later.

“So maybe I’m thinking of doing someone a favor. Anyway, that’s been a recurring wish of mine at this time of year, not that it means anything. You know, we’re all expendable: if Jesus taught us anything, at least he taught us that. I see that our time is up and so, on behalf of the crew, allow me to wish you all a Merry Christmas and a goodnight: Goodnight.

“Well, General, you surprised me.”

“Not once did you use your blackboard, and you understand the mindset of our military.”

“I wouldn’t join up today, I’ll tell you that. Pardon Lakin and all the others then ask me that question again.”

[***did kill him: it was actually them. It’s called war; either you kill the enemy or they kill you. There’s no place for sentimental fools.]

One Response to "We Want EVERY American Neighborhood Safe (RR)"