“MY CELL IS NO LONGER COLD” 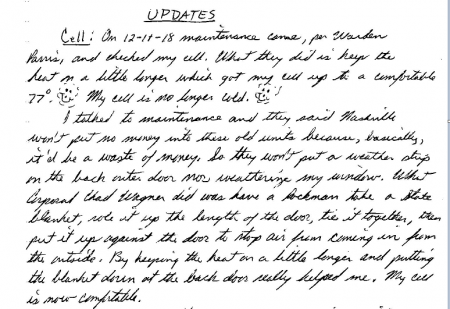 (Dec. 21, 2018) — A letter arriving on Wednesday dated December 12, 2018 from TDOC inmate Grenda Ray Harmer, #88710, reports that the frigid temperature of his cell necessitating his wearing several layers of clothing at all times has been corrected.

Under the heading, “UPDATES,” Harmer wrote that “On 12-11-18 maintenance came, per Warden Parris, and checked my cell. What they did is keep the heat on a little longer which got myself up to a comfortable 77°. My cell is no longer cold.”

The lack of heat in Harmer’s cell, which is in the Protective Custody (PC) unit at the Morgan County Correctional Complex (MCCX), began in late October or early November, as evidenced by a November 10, 2018 letter we received describing cold air being “pumped from outside” his cell by what Harmer believed to be a “decades-old” heating system.

Last winter Harmer reported the same problem, although TDOC spokeswoman Neysa Taylor denied it was occurring. In January, however, Harmer reported that the problem had been eliminated in large part and that he discovered later a number of other PC inmates had had the same complaint over that winter.

Harmer reported earlier this month that in an improvement, some heat was being supplied to his cell.

Further to the complete restoration of heat, Harmer wrote, “I talked to maintenance and they said Nashville won’t put no money into these old units because, basically, it’d be a waste of money. So they won’t put a weather strip on the back outer door nor weatherize my window. What Corporal Chad Wagner did was have a lockman take a State blanket, role it up the length of the door, tie it together, then put it up against the door to stop air from coming in from the outside. By keeping the heat on a little longer and putting the blanket down at the back door really helped me. My cell is now comfortable.” [sic] 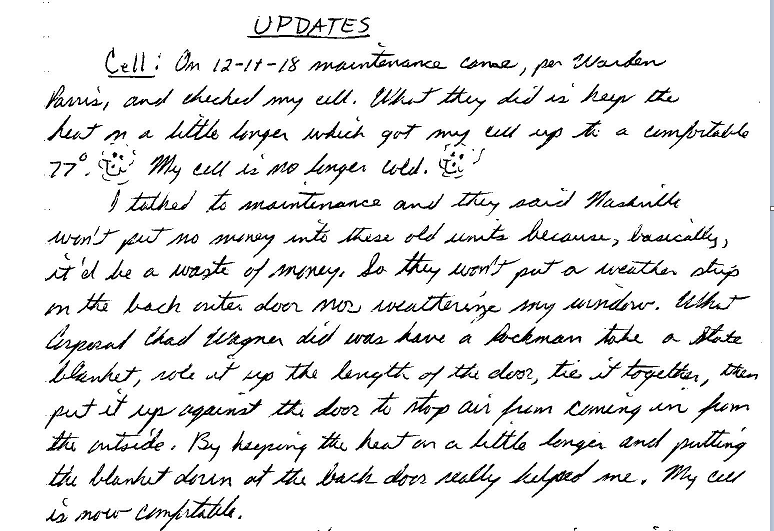 In other news, Harmer said that he will not be going to a Transition Center for his final 12-15 months of incarceration, as he had hoped. “I’ll remain on PC status at MCCX until I’m discharged from custody even though it violates Tennessee statutes and TDOC policies,” he wrote. “It’s Central TDOC office in Nashville are the culprits.” [sic]

He also said that a Christmas gift sent from a friend was “cancelled,” meaning “rejected,” by the prison mailroom. “It’s being done to punish me for exposing MCCX corruption and illegal activities,” he wrote. “That’s the 3rd package they did it to me.” [sic]

Regarding a “setup” he described in late June in which he was accused of harboring a weapon in his cell, Harmer wrote, “Internal Affairs Richard Garner has refused to do an investigation over a knife being planted in my cell. The reason is simple. If they order, from the private firm who has permanent video, the video it’ll show staff unlocking my door after I went to recreation and an inmate entering my cell to put it under my mattress. I know who the culprits are. They know I know.”

One Response to "Harmer Reports Heat Turned On"