“IT’S GOING TO ROCK THIS COUNTRY!” 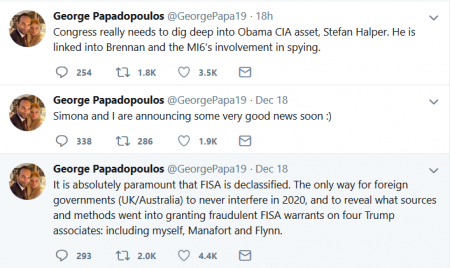 (Dec. 20, 2018) — Over the last few days, former Trump campaign adviser George Papadopoulos has issued a number of statements on Twitter pertaining to the Russia “collusion” investigation which landed him in federal prison for 12 days following his acceptance of a plea deal for allegedly lying to the FBI.

Since his release on December 7, Papadopoulos has re-announced his plans to run for Congress in Orange County, CA as well as a Los-Angeles-based film series in which he and his wife, Simona Mangiante Papadopoulos, are appearing.

Papadopoulos originally supported Dr. Ben Carson for the Republican nomination for president. However, when it became clear that Trump was the frontrunner and would likely receive the nomination, Papadopoulos pledged his support to the Trump campaign. At the time, the 29-year-old was living overseas and working as an energy consultant, with heavy involvement in Israel and Cyprus.

Despite his “guilty” plea, Papadopoulos has said in numerous media interviews that he was “framed in many ways” by the government.  On Wednesday he tweeted that he was approached by “6 spies” overseas during the run-up to the 2016 presidential election.  His November 2, 2018 interview with former Secret Service agent and radio host Dan Bongino appears to have corroborated much of what Bongino wrote in his book about the alleged machinations of the U.S. intelligence community regarding the Trump campaign.

Stefan Halper is a former Cambridge (UK) University professor who has reportedly worked for the CIA and the Pentagon.  Both Papadopoulos and Carter Page, the latter of whom it is known the FBI and DOJ obtained four FISA warrants between 2016 and 2017, were approached by Halper in 2016.

Page has revealed emails in which Halper appeared to have been offering his “help” to the Trump campaign.

Early Thursday morning East Coast time, Papadopoulos tweeted, “When my Capitol Hill testimony is made public, it’s going to rock this country! So much to be revealed!”

In October, Papadopoulos testified to the House Oversight & Government Reform and Judiciary Committees behind closed doors. The following month, he began to suggest, and later said outright, that he, too, was the subject of a FISA warrant, along with two others besides Page.

Papadopoulos has hinted that proof of his claim lies in approximately 20 pages of classified information which President Trump pledged to make public in September but then quickly changed his mind, reportedly after Deputy Attorney General Rod Rosenstein advised against it.

On Tuesday and Wednesday, respectively, Papadopoulos not only tweeted “some very good news soon,” but also that Halper “is linked into Brennan and the MI6’s involvement in spying” and that “It is absolutely paramount that FISA is declassified. The only way for foreign governments (UK/Australia) to never interfere in 2020, and to reveal what sources and methods went into granting fraudulent FISA warrants on four Trump associates: including myself, Manafort and Flynn.”

The reference to “Brennan” is to Obama’s CIA director, John Brennan, who harbors an intense dislike of Trump and has predicted his political demise on Twitter.  “MI6” is the British intelligence agency for whom Christopher Steele, compiler of the now-infamous Trump-Russia “dossier,” worked.

The dossier was used to convince the Foreign Intelligence Surveillance Court (FISC) that warrants on Page were necessary, although the court was not informed that the dossier was a politically-manufactured product, paid for by law firm Perkins Coie by means of the DNC and Hillary Clinton campaign.

Papadopoulos has often claimed that the governments of the UK and Australia, the latter in the person of then-ambassador to the UK Alexander Downer, attempted to sabotage Trump’s chances of winning the 2016 election.

It was reportedly a conversation in Rome between Papadopoulos and Maltese professor Joseph Mifsud, followed by another between Papadopoulos and Downer at the Kensington Wine Rooms in London, which acted as the catalyst for the FBI to launch its counterintelligence probe into the Trump campaign, an unprecedented move on the part of the agency. Papadopoulos has claimed he did not initiate the meetings nor had any knowledge that the “Russians” reportedly had “dirt” on Hillary Clinton in the form of emails she never produced from her non-secure, non-government-approved email server utilized while she was Secretary of State.

“Manafort” is former, short-term Trump campaign manager Paul Manafort; “Flynn” is Lt. Gen. Michael Flynn (Ret), who pleaded “guilty” to lying to the FBI during questioning in January 2017, four days after the Trump administration took office.  On Tuesday, Flynn stood by his plea during a sentencing hearing, after which U.S. District Court Judge Emmet G. Sullivan launched into a shocking diatribe in which he asked if the former Trump national security advisor and 33-year military officer should have been charged with “treason.”

Manafort is now serving time in federal prison for convictions unrelated to his work on the Trump campaign, while Flynn again awaits sentencing after a status update on his cooperation with Special Counsel Robert Mueller is provided to Sullivan, or whoever is presiding, in March.

It was reported that following a break, Sullivan walked back his comments, leaving the impression with some that he was either displaying “vindictiveness” toward Flynn or was ill-prepared for the hearing after it became clear that he conflated Flynn’s service to Trump with his previous lobbying on behalf of Turkey as a private citizen.

On December 7 and 17, former FBI Director James Comey confirmed in closed-door testimony to the Judiciary & Oversight Committees that “four Americans” were the subjects of FISA warrants in 2016.

Papadopoulos has also been promoting his book, Deep State Target: How I Got Caught in the Crosshairs of the Plot to Bring Down President Trump, which will be available in hardcover in late March.  On December 12, he described the book as “A first time insiders perspective into the biggest political scandal of modern American history: FISA abuse, surveillance of Americans, allies involved, and why George Papadopoulos was targeted. Competition over oil rights in the Middle East, bases and disinformation campaigns.” 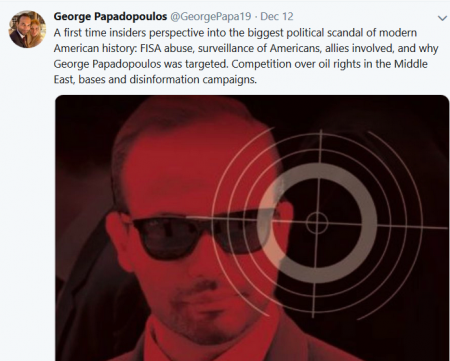 One Response to "Papadopoulos Again Urges Release of “FISA” Documentation"