WILL THE MAINSTREAM MEDIA BE “SILENT NO MORE?” 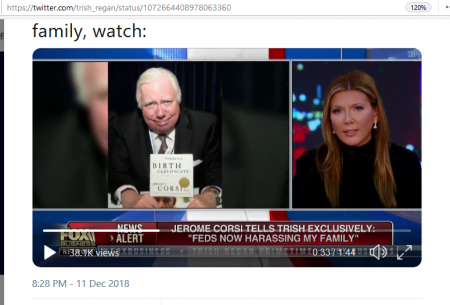 (Dec. 12, 2018) — In her nightly Fox Business Network broadcast, “Trish Regan Primetime” on Tuesday, host Trish Regan reported that following an interview with Dr. Jerome Corsi on Monday night about what he describes as “abusive” and “criminal” treatment of him by Special Counsel Robert Mueller’s investigators, Corsi informed her Tuesday morning that “the Feds” paid a visit to his stepson on Tuesday morning to ask whether or not he had ever deleted any of his stepfather’s emails, according to a statement from Corsi Regan read on-air.

The full segment, which did not include a subsequent interview with Corsi, can be viewed here:  https://video.foxbusiness.com/v/5978369815001/?#sp=show-clips

Two weeks ago, Corsi rejected a plea agreement from Mueller charging him with one count of perjury, claiming that he is innocent of lying but forgot about an email during his interrogations.

Corsi will join Regan on Friday, she announced in a “programming note” following her interview with formal federal prosecutor Doug Burns on the subject.

On Monday, Corsi filed a civil lawsuit against Mueller, the NSA, CIA and FBI, asking for a combined $350 million in damages. that followed a criminal complaint submitted on December 3 to Acting Attorney General Matthew Whitaker and a number of other Justice Department officials alleging Professional misconduct and criminality on the part of Mueller and his team of prosecutors, many of whom have donated to or represented prominent Democrat political figures.

While introducing the subject Tuesday, Regan’s producer displayed various still photographs of Corsi, one of which included his holding up his book, “Where’s the Birth Certificate: The Case that Barack Obama is not Eligible to be President.”

The mainstream media often terms Corsi a “conspiracy theorist” because of his questioning of Obama’s birthplace and scant, unverified documentation against the U.S. Constitution’s requirement that the president and commander-in-chief be a “natural born Citizen.”  The author of 20 books, Corsi is releasing a new book in March detailing his treatment at the hands of Mueller and the team he assembled to conduct the Trump-“Russia” investigation.

The book is titled, “Silent No More: How I Became a Political Prisoner of Mueller’s ‘Witch Hunt,'” utilizing the term Donald Trump has often used for the Special Counsel’s probe, assumed from the FBI after Trump fired its director, James Comey in May 2017.

Three months prior to the appearance of the image on the White House website, then-businessman Trump was speaking out in prominently-featured media interviews about his doubts that Barack Obama was born in Hawaii, as he claims, and questioning why the White House had not released Obama’s more detailed, “long-form” birth certificate to prove his eligibility for the presidency.

Days after his book was published, Corsi declared Obama “born in Kenya.” While visiting that country prior to the 2008 election and attempting to hold a press conference, Corsi was detained by Kenyan “immigration officers.”  He was later said by mainstream media as having been “deported,” although Corsi had planned on leaving Kenya following the presser.

Corsi played a significant role in the launch of a 5+-year criminal investigation into the “long-form” birth certificate image posted by the Obama White House on April 27, 2011. Although his book was not published until several weeks later, he presented his investigative research to the Maricopa County, AZ Sheriff’s Office (MCSO), then led by Sheriff Joseph Arpaio, who in August 2011 tasked one of his volunteer groups with what he believed would be a short-term examination of the image to ultimately “clear the president.”

However, after several days, lead investigator Mike Zullo was forced to inform Arpaio that his team could not affirm that the image represented an authentic paper document, and the probe therefore continued.

At the first of what would be three press conferences on March 1, 2012, Zullo announced that probable cause existed to believe the long-form image to be a “computer-generated forgery.” Additional investigation showed that Obama’s purported Selective Service registration form is also fraudulent, Zullo said.

In response, U.S. media, including Fox News Channel, provided virtually no television coverage of the findings or the press conferences.  Some reporters directed open hostility toward the investigators and misrepresented the probe as one seeking Obama’s place of birth rather than the originators of a forgery of a government document belonging to a sitting president.

The media almost universally misreported the outcome of the final presser held on December 15, 2016, during which Zullo reported that two well-known, outside forensic analysts who studied the image reached conclusions very similar to his own. At the time, Zullo also reported that his team had acquired a paper document believed to have been used as a source for the creation of the long-form forgery and depicted it in a video showing how “nine points of forgery” originated from that document.

In an interview last Thursday, “Freedom Friday” host Carl Gallups, who has often interviewed Zullo about the progress of the birth certificate investigation, told radio host Bill Martinez that someone with “international” recognition spoke with a powerful “DC player,” also an internationally-known figure, about the birth certificate findings and was reportedly told that the DC player is “waiting for the specific timing” to take action.

Gallups contended, “Donald Trump’s now the president, and I’m telling you: Sheriff Arpaio knows this, Mike Zullo knows this; I’ve been screaming it; Jerome Corsi knows it — a lot of what Mueller is doing and what the Deep State’s doing and their desire to get Trump out of office goes to the foundation of the fake birth certificate.”  His statements to Martinez stemmed from a November 16, 2018 interview with Zullo in which Zullo had said that “very, very high, high, high-level White House officials have had a cursory briefing of the information that we garnered about the certificate.”

On November 30, Zullo told Gallups in a separate interview that “There is no original certificate; there never was.”  In August, Zullo said, “It has been an open secret in the intelligence community and DC that Obama could never satisfy the constitutional requirement of being born on American soil.”