A MAN OF “STRONG CURIOSITY” 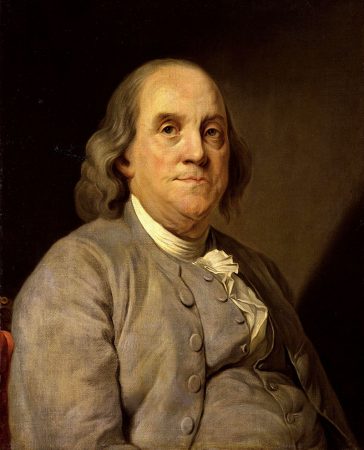 (Nov. 1, 2018) — Benjamin Franklin was born on January 17, 1706.  At the age of 12, he began an apprenticeship as a printer and later wrote Poor Richard’s Almanack.  Franklin helped establish the first Public Hospital and the first volunteer fire department in America.  He was also a founding member of the Pennsylvania Abolition Society.  At the age of 70, he was the oldest signer of the Declaration of Independence.  Franklin’s inventions included the Franklin Stove, Lightning Rod, Odometer, Glass Armonica, Bifocals and the Flexible Urinary Catheter. With the help of his cousin, Timothy Folger, Franklin was the first to name and plot the Gulf Stream.  Always the scientist, Franklin wrote about his encounter with a whirlwind.

“Being in Maryland, [and] riding with Colonel Tasker… we saw in the vale below us, a small whirlwind beginning in the road, and… moving up the hill towards us, and enlarging as it came forward. When it passed by us, its smaller part near the ground, appeared no bigger than a common barrel, but widening upwards, it seemed, at 40 or 50 feet high, to be 20 or 30 feet in diameter. The rest of the company stood looking after it, but my curiosity being stronger, I followed it…

As it is a common opinion that a shot, fired through a water-spout, will break it, I tried to break this little whirlwind by striking my whip frequently through it, but without any effect.  Soon after, it quitted the road and took into the woods, growing every moment larger and stronger…  and when I saw the trunks and bodies of large trees enveloped… [and having no effect on] the passing whirl… I no longer wondered that my whip had no effect on it in its smaller state.

I accompanied it about three quarters of a mile, till some limbs of dead trees, broken off by the whirl, flying about and falling near me, made me more apprehensive of danger; and then I stopped, looking at the top of it as it went on, which was visible, by means of the leaves contained in it, for a very great height above the trees.” Benjamin Franklin, Letter to Peter Collinson, August 25, 1755

“Upon my asking Colonel Tasker if such whirlwinds were common in Maryland, he answered pleasantly, ‘No, not at all common; but we got this on purpose to treat Mr. Franklin.’ And a very high treat it was, too.”  Benjamin Franklin, Letter to Peter Collinson, August 25, 1755