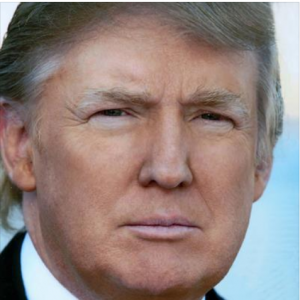 (Oct. 23, 2018) — “Good evening, ladies and gentlemen, and welcome to the place for your brain to relax in what we like to refer to the ‘couch for your mind’: ‘The Pulse of the Nation.’ That, by the way, was an introduction as suggested by none other than our very own eminent go-to psychiatrist for the nuts among us, Professor Zorkophsky. And speaking of nuts, we have one with us now. Why the bag?”

“Why the brown paper sack over your head?”

“Are you kidding? Now who’s the nut now?”

“Okay; alright already. So you’re a Democratic congressman from where? Oh, sorry. So your lapel pin on your jacket; what’s that supposed to signify?”

“If you had a 10-X magnifier you’d see a donkey braying at a Cheshire Cat in a tree. Here, I just happen to have a magnifying glass with me; go ahead, take a look.”

“You will? Why, that’s the first time anybody took my word for anything.”

“And you’re a congressman? What do you think of our president?”

“Which one, Hillary or Trump?”

“Stop! Okay, we get the picture. So what about Trump? Why this ‘impeachment’ nonsense?”

“Well, Mr. Roving, think about it: how can you expect to do any business in Washington if you tell the truth? Everybody lies; it’s how things get done.”

“What things get done?”

“I was using ‘get done’ as a figure of speech, but what would you know about how to conduct business in our nation’s capital: you’re from a ‘flyover State.’  You don’t understand the fine art of procrastinating; to take so long that people forget the question. Why, ever hear of a committee and hearings or to take it under advisement? What are you, some kind of ignorant hick?”

“Oh, one of those; I should have known. You know what you are? You’re our worst enemy: the informed voter. You have no business in our country, or at least not business in the voting booth. And speaking of voting, I bet you like that voter ID stupid idea, am I right? I’m right, aren’t I? I knew it!”

“No it’s not called ‘common sense.’ It’s called ‘the death of the Democratic Party,’ is what it is. Think about it: how do you suppose that usurper Barry Soetoro got elected?” 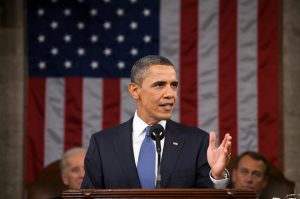 “Barack Obama*; same thing, and who knows how many other names he’s used. Look: voter ID would kill our corrupt institutions that we’ve come to rely on for so long for so many. Think of welfare and the girls getting pregnant so they can collect an even bigger government handout every month. Think of all those government workers (?) processing Food Stamps. You want to make government employees go out and get a (real) job, don’t you?”

“Matter of fact, that’s not such a bad idea.”

“See, I knew it. Oh, I got you pegged from the get-go. I bet you stand for the Anthem, don’t you? And I bet you know the words and sing along; and I bet you say ‘under God’ with hand over heart. You’re a dinosaur, is what you are. Socialism is where it’s at.”

“Look, we all know that Socialism doesn’t work, okay? Even Bernie Sanders doesn’t believe in what he’s preaching. Politics is a game for the greedy and those with altruistic beliefs aren’t welcomed, thank you very much. NOW do you know why we have to impeach Trump? He’s too good for our country: he speaks the truth. Imagine him signing Indian Treaties; why, there wouldn’t be any worthless reservations, now, would there?”

“Well, you got me there. Excuse us while we break for a commercial.”

“What about this caravan?”

“So interviewing you was a waste of time, wasn’t it?”

“You remember Trump telling the ‘Snake Story’? So what did you expect interviewing a Democrat, the truth? Fat chance: if we told the truth we would all be in jail, and with that I’m taking this ridiculous bag off of my head and getting out of here.”

“Gee, I guess a ‘You’re welcome’ would’ve been nice. Well, I guess any discussion about voter ID is off the table. Thanks for watching and so, on behalf of the crew, I’ll be wishing you all a goodnight: Goodnight.

“I bet Chief New Leaf would like to say a few words to that dude. Good show; at least the truth came out in spots. Burger time: my treat.”