Sen. Feinstein Needs to be Censored and Ostracized

IS IT TIME FOR THE 85-YEAR-OLD TO RETIRE? 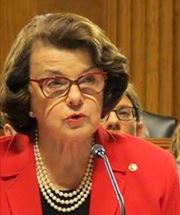 (Sep. 25, 2018) — “Good evening, ladies and gentlemen, and welcome to ‘The Pulse of the Nation,’ your pit-stop for the truth. Hello, my name is Roving, as in Roving Reporter (RR), and I’ll be your host while we interview our neighbors from our corner, under the awning, across the street from the railroad depot. Our modus operandi is to waylay people on their way to the big city and inquire as to their main bug of the day. Excuse me, sir, Roving for ‘Pulse,’ care to be on TV for a quick comment?”

“First, what’s your name and where are you off to?”

“Name is John and I’m off to work and before you ask I’ll tell you: I’m a Democratic Strategist and I’ve watched ‘Pulse’ enough to know that you never got the message that Obama’s BIRTH CERTIFICATE question has been debunked, along with Benghazi.”

“What about Benghazi? What was debunked about it?”

“Well, Hillary blamed it on a video, for one, and our Ambassador to Libya wasn’t tortured or beaten: he died of natural causes attributed to old age, or maybe it was ‘over-work,’ I forget which; or maybe it was a combination.”

“Care to tell us about President Trump’s latest nominee for the Supreme Court, Brett Kavanaugh?”

“No, I’d rather not talk about it. I’m afraid that it’s all too obvious that the Democratic Party is so far out of whack that the only semblance of regulation is from the Nihilists, National Socialism Party, and ANTIFA/Occupiers. It’s really rather embarrassing nowadays, and that’s too bad.”

“Because the Democratic Party has discarded the Constitution, that’s why, and they don’t have anything to replace it with, which is why the act lost because they are lost.”

“I thought they were gung-ho on Socialism.”

“That’s for the dummies; nobody actually believes in that malarkey; that’s just for the marijuana-induced-Daddy’s-paying-for my-education nitwits; the easily-swayed; the fight for The State seems important to them even though they have no dog in the fight.”

“No dog? So if they won’t benefit, why bother?”

“Exactly; they fight for the rewards that they’ll never see; they’ll be used and discarded along with the rest of us.”

“Will they ever get with it?”

“Maybe, but then again, maybe not. Be kind-of sad to finally understand the truth as you’re being herded into the showers, now, wouldn’t it? To learn that all of your life was a lie would be a hard pill to swallow.”

“So what’s preventing them from seeing the light; I mean, why can’t they get on board with what’s good for America?”

“Why, they can’t even admit to themselves that they’re wrong, so how do you expect them to admit it to anyone else? And, I’m sorry, but I’ve a train to catch. Bye.”

“Bye. What do you say we take a commercial break?”

“And we’re back here with Jan who is off to work in the big city. Mind if we ask what you do for a living?”

“Not at all: I’m a proofreader for the university’s newspaper. By the way, my father is a retired policeman and he said that if those policemen knew how to do their job, they would’ve tased those protesters at the Kavanaugh hearings and after the others saw the first one twitching on the floor maybe they would’ve kept their mouths shut.”

“You know, I had exactly the same thought. So what do you think of what’s going on with Kavanaugh?”

“I feel sorry for his family, that’s for sure. And you know what?”

“It really exposes what the Democrats are all about, now doesn’t it? I mean, here’s a judge who follows the Constitution, and you sure as heck can’t get any better than that, now, could you?”

“So if they don’t support the Constitution, it kind-of makes you wonder whose side they’re on, doesn’t it? Not on our side, that’s for sure. Look, I don’t want to sound like a Pollyanna, but this senator from California, Dianne Feinstein, completely destroyed the meaning of bad manners.”

“So what do you think about that?”

“I think that the cops better get a grip. Someone goes to a restaurant and gets heckled and the cops don’t arrest anybody, at the least for trespassing, or causing acute emotional distress. Let me ask you something: if someone made a death threat against you, what would you reasonably expect?”

“Well, I would reasonably expect the person who issued the threat to be thrown in jail for at least five years because that’s about how long it would take me to calm down, understand?”

“I understand, and so does my father, who said the same thing, except after they’re locked up throw away the key. The thing is, nothing is being done, which makes me believe that our police force is part of the Deep State. They’re taking orders from the sheriff, who is taking orders from a Democratic Mayor, like the loser in Baltimore who let her city burn on prime-time TV.”

“So, getting back to Feinstein, what do you suggest?”

“Well, she should be retired. Someone should call the moving van and have her taken away back to the asylum on the West Coast they call California, that’s what. And that’s my train pulling in. Nice talking with you, Roving. See you.”

“You, too. And that’ll do it for today, which means it’s that time for me to say, on behalf of the crew, thanks for watching and have a goodnight: Goodnight.

“Good show. So the Democrats have lost it for sure and for good. It’s been a week and this Feinstein is still running her mouth, and nothing’s being said about what a total sleaze she is; a gutter-dweller dishing out pain, heartbreak and fear to a couple of little girls [Kavanaugh’s kids, “Another Brick in the Wall” (4:01)] just because she trashed the Constitution and disrespected everyone who ever took the Oath. She really ticks me off. Burger time: my treat.”

Sen. Feinstein Needs to be Censored and Ostracized added on Tuesday, September 25, 2018

One Response to "Sen. Feinstein Needs to be Censored and Ostracized"