“BEING A GOOD JUDGE” 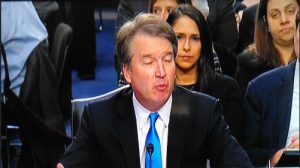 Grassley spoke for less than two minutes when hecklers in the room loudly interrupted.  At first, Grassley attempted to speak over them; he then stopped speaking until the disrupters were removed.

A question sent to the U.S. Capitol Police by this publication on Tuesday as to the procedure for removing hecklers from a formal hearing received no response.

Grassley said that each senator on the committee will have 30 minutes to ask the nominee questions.

At 9:42 a.m., another heckler shouted something, although it lasted only a second or two.

Another heckler began shouting a minute later when Kavanaugh began responding to Grassley’s first question, which asked what he believes are the qualities of a “good judge.”

“We are a system of constitutional precedent,” Kavanaugh said of the high court, which he said “comes right from the Constitution,” and specifically Article III.  “Precedent is rooted right into the Constitution itself,” he said.

Hecklers were heard at 9:48, 9:52 and 9:53 a.m., causing Kavanaugh to pause.  At one point, Kavanaugh asked Grassley, “Should I proceed?” to which Grassley said, “Let the people have their free speech.”

At 9:57, hecklers interrupted Grassley as he posed another question.