“I HATE PEOPLE WHO PREY ON THE HANDICAP” 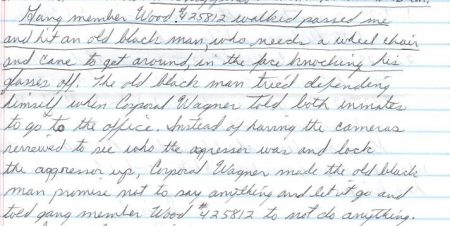 (Aug. 2, 2018) — A letter received on Thursday from Morgan County Correctional Complex (MCCX) inmate Grenda Ray Harmer reported that a Corporal Chad Wagner “is being soft towards gang members” based on an alleged assault by a gang member against an older disabled inmate which went unpunished.

Referencing a July 10, 2018 letter on which The Post & Email reported, Harmer wrote that “inmate James Wood #425812, gang member, was moved in with me. When I squared off with him (Wood #425812) after he tried pushing me around he quickly moved out.”

Written on July 29, 2018, the letter continues, “Today, I heard gang member Wood #425812 talking with other gang members about assaulting someone as we returned from recreation. I thought gang member Wood #425812 might be talking about me so as soon as I entered the Unit I quickly laid my stuff down and turned around.” Harmer said he heard the remarks “between 10:59 a.m. and 11:10 a.m.”

He then wrote, “Gang member Wood #425812 walked passed me and hit an old black man, who needs a wheel chair and a cane to get around, in the face knocking his glasses off.”  [sic] The text was underscored for emphasis.

Harmer was placed in the protective custody (PC) unit exactly one year ago after a gang member threatened him in the general population area of the prison, which is operated by the Tennessee Department of Correction (TDOC).

The Post & Email is aware that someone utilizing a State of Tennessee ISP frequently reads our articles about its prison conditions. On Wednesday, August 1, our visitors’ log indicated that such an individual spent one hour, 29 minutes and 48 seconds on the website accessing multiple articles on the topic to include multiple articles based on Harmer’s letters and an article reporting, based on a documents posted at PACER, that former inmate Robert Z. Whipple, III and the State of Tennessee had reached a settlement agreement in the case of Whipple v. Millay.

Over the 3+ years in which we have reported first-hand accounts from inmates of their observations and experiences in Tennessee’s prisons, no one from the TDOC has contacted us to dispute their validity.

Page 2 of Harmer’s letter provides additional examples as to why the believes Wagner “is being soft towards gang members,” including the allegation that he and another correction officer accepted “a bribe” from an inmate in the form of a pizza.

“Gang members should not be in P.C. with inmates were not gang members,” Harmer concluded the letter. “I hate people who prey on the handicap.” [sic] 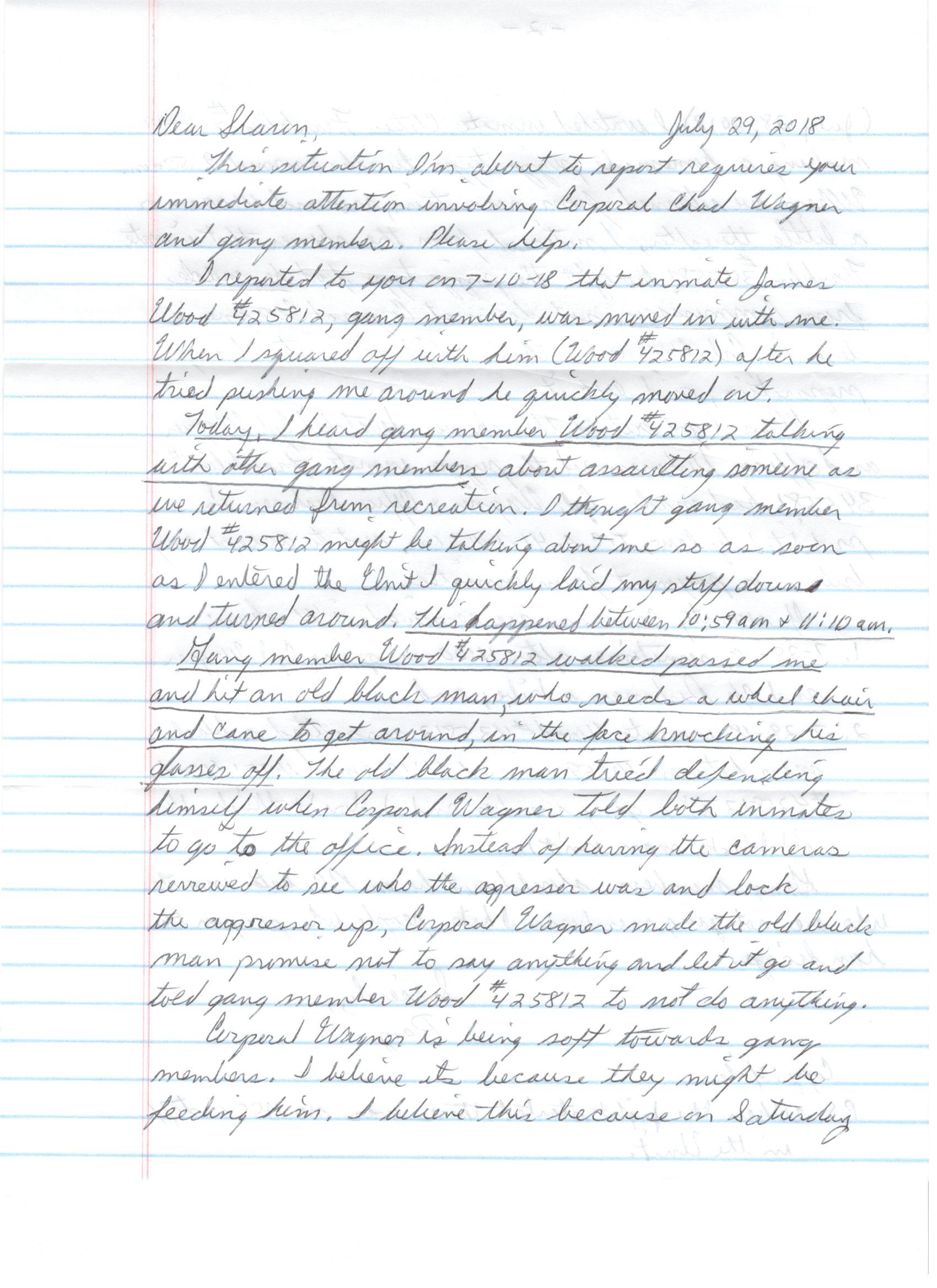 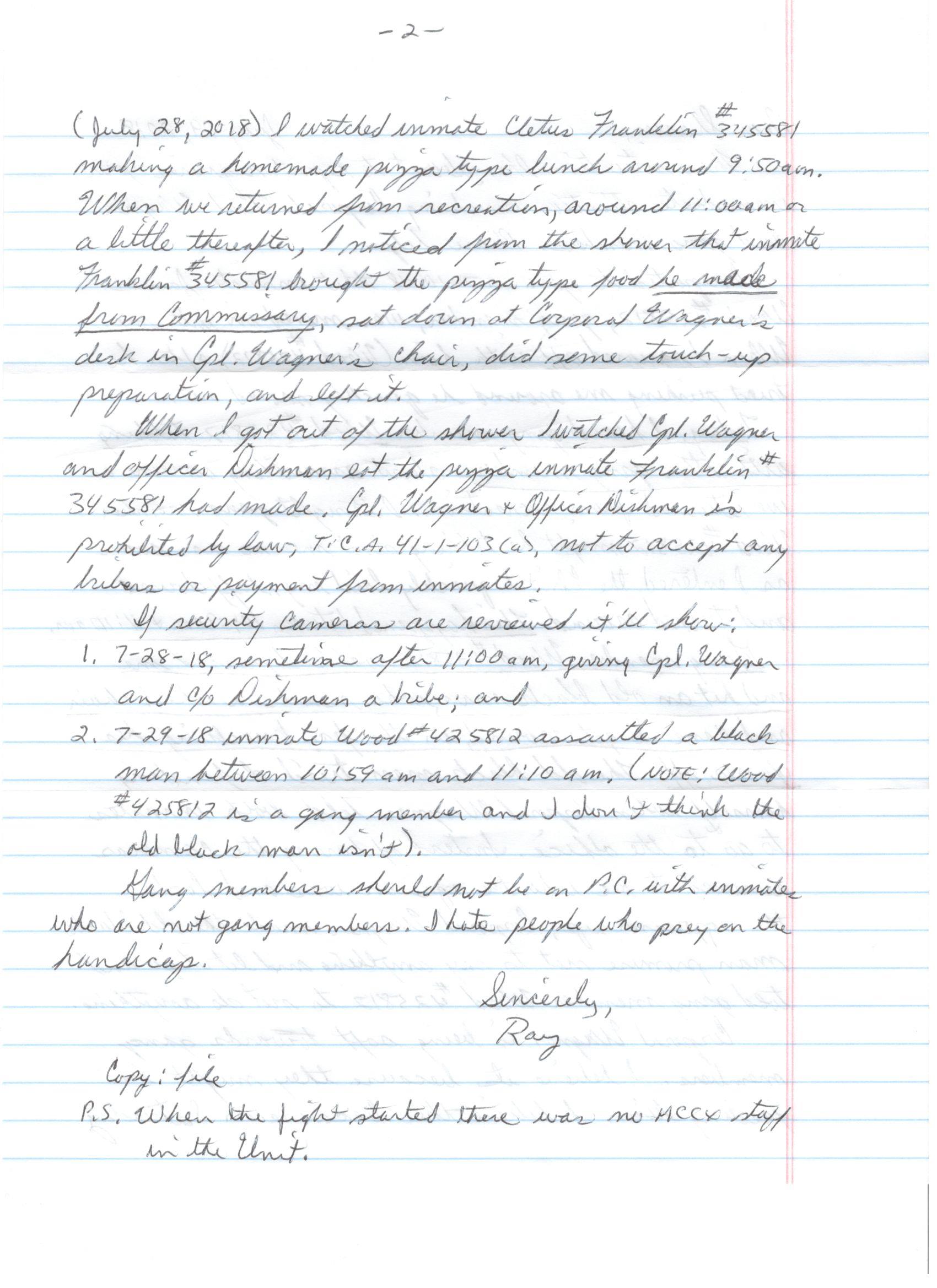