Inmate Lawsuit Challenging Denial of Court Access to be Settled 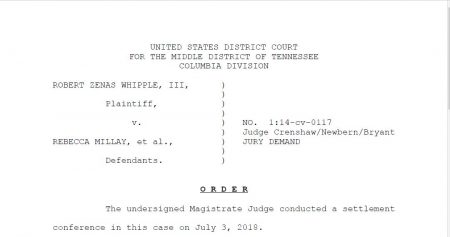 (Jul. 7, 2018) — A federal lawsuit filed in 2014 by former TDOC inmate Robert Z. Whipple, III has reached a tentative settlement, according to a document dated July 3, 2018 posted at the federal PACER repository.

The order is signed by U.S. Magistrate Judge John S. Bryant representing the U.S. District Court for the Middle District of Tennessee and states that a “settlement conference” was held earlier that day with the defendants and plaintiff in Whipple v. Millay.

The suit was initiated in September 2014 and dismissed for “failure to state a claim.”  However, Whipple revived the case the following year after he was relocated to another prison at which he claimed he was again denied access to the prison law library and therefore the courts under § 42 USC 1983, civil rights.

In February of this year, after further litigation on Whipple’s part alleging ongoing denial and retaliation on the part of TDOC employees, a “Westlaw” terminal was installed in the Bledsoe County Correctional Complex (BCCX) annex in what appeared to be an effort to settle and conclude the matter.  Shortly thereafter, the library’s hours of operation were reduced by half, Whipple reported, and in combination with the hours of his prison job, he was then rendered entirely without access.

On April 3, Whipple notified TDOC Commissioner Tony Parker that BCCX personnel had engaged in “bad faith negotiations” and that he would file a renewed complaint in the lawsuit.  A timeline of events which brought Whipple to that point appears in a court document stamped April 11, 2018.

An April 23, 2018 Parole Board hearing resulted in Whipple’s being granted release to a halfway house approximately four weeks later.  On May 7, while Whipple was still a prisoner, a phone conference among the parties ordered by U.S. Magistrate Judge Alistair E. Newbern took place with unclear results.

The July 3 order states that “The parties and their representatives met, negotiated in good faith, and agreed to a compromise settlement of all claims, contingent upon the approval of the Attorney General and the Treasurer of the State of Tennessee.”