Tennessee’s MCCX: Why Has Harmer’s Cellmate Been Changed…and Changed Again?

(Jul. 13, 2018) — A letter received Friday from MCCX inmate Grenda Ray Harmer reports that without his having requested a change in cell assignment or cellmate, two successive cellmates have been brought in who are gang members.

Last August, Harmer was relocated from the prison’s general population to protective custody (PC) after a gang member entered his cell unsolicited and threatened him with a knife, an incident Harmer believes was purposely allowed to occur by correction officers.

For at least the last 18 months, Harmer has been outspoken in writing about alleged violations of Tennessee code, the U.S. Constitution and Bill of Rights, and the Tennessee Department of Correction’s (TDOC) Administrative Policies and procedures.  In late June, he reported an unwarranted “shakedown” of his cell.

In his newest letter, dated July 8, 2018, Harmer wrote that he believes the motive for the change in cellmates is that certain correction officers “are trying to get me in a fight so they can max me out.”

Harmer has approximately 19 months left on a 25-year, 100% sentence for convictions on serious crimes.  “To make an in-hours cell change I have to sign a cell change request,” he wrote. “I never signed one. Corporal Perry even asked me to. I said no because I don’t get along with gang members. Violating policy Cpl. Perry forced inmate Wood, confirmed gang member, into the cell with me.” 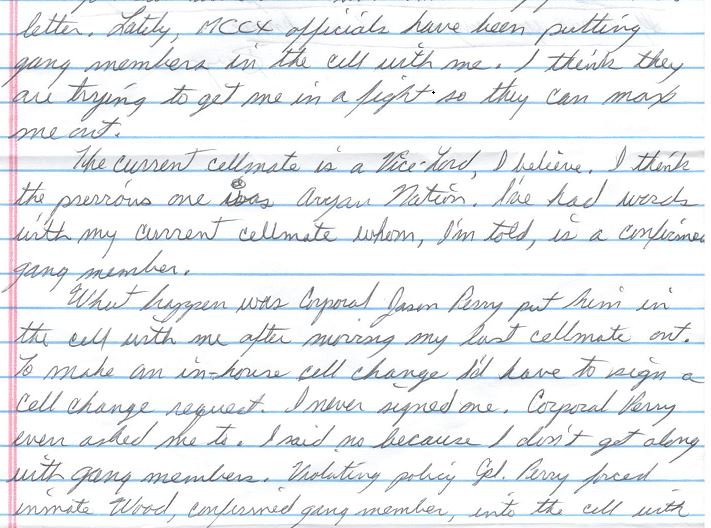