(Jul. 16, 2018) — A letter received Monday from an inmate at the Northwest Correctional Complex (NWCX) in Tiptonville, TN claims that outright segregation between blacks and whites is practiced in regard to mealtime seating.

The inmate, from whom we have heard previously and who we consider to be a reliable source, enclosed a letter he said was written by a correction officer claiming to have witnessed an act of segregation against a black inmate.

Title VI of the Civil Rights Act of 1964 prohibits discrimination on the basis of “race, color, and national origin in programs and activities receiving federal financial assistance.”

The 1954 U.S. Supreme Court decision in Brown v. Board of Education prohibits segregation on the basis of race in public education.

NWCX’s Pro-Social Life Skills (PSLS) course, in which inmates are enrolled whether or not they qualify, is reportedly federally-funded.

According to the Jim Crow Museum at Ferris State University in Big Rapids, Michigan, “Jim Crow was the name of the racial caste system which operated primarily, but not exclusively in southern and border states, between 1877 and the mid-1960s. Jim Crow was more than a series of rigid anti-black laws. It was a way of life. Under Jim Crow, African Americans were relegated to the status of second class citizens.”

In his letter, the inmate reported that “and African American prisoner was attempting to sit at a table in the dining hall and was told by a staff member that he could not sit at the table because it was ‘reserved’ for white inmates only. This is just the most recent case of blatant racism at this institution…”

He went on to allege that black inmates are discriminated against for prison employment “not because they are not qualify, but because the job supervisor does not desire to have a person of color employed in that position.”

He noted, however, that “not all staff members subscribe to racist thinking…”

The second page of his letter consists of two sentences, the first of which reads, “Please see the enclosed handwritten letter from a staff member who witnessed this latest incident of State sponsored racism.” 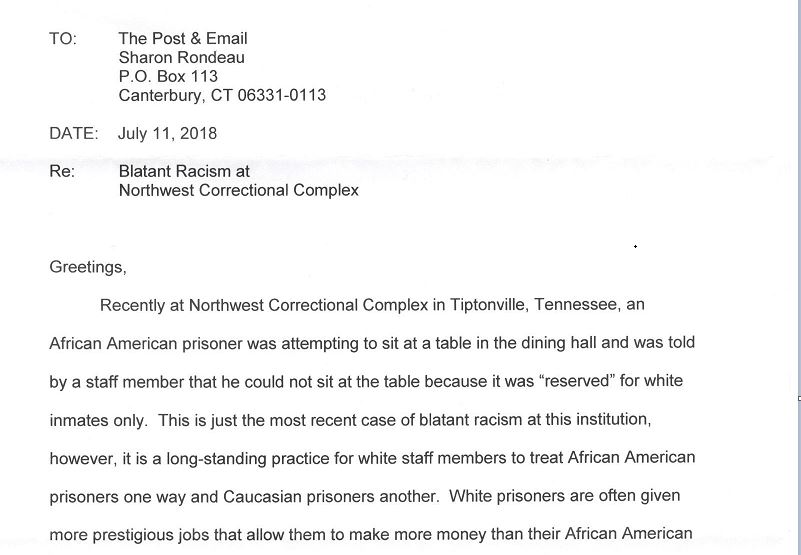 The Post & Email has made the decision not to publish the letter reportedly written by the correction officer so as to preclude any retaliation which might arise on the part of his coworkers and/or employer.  The one-paragraph letter refers to two correction officers by name, includes the writer’s last name, and indicates that he witnessed an inmate, who he identified by first and last name and TDOC number, being told by one of the COs that “he could not sit at the white boys table…due to the fact that he is black.” [sic]