“WE’RE NOT SURE IF THIS IS A MIRACLE OR WHAT” 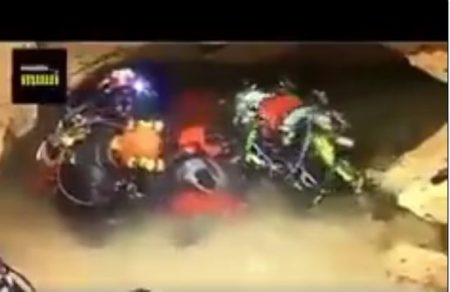 (Jul. 10, 2018) — At approximately 7:54 AM EDT on Tuesday, Fox News reported that the last members of a boys’ soccer team in northern Thailand were rescued, along with their 25-year-old coach, from the cave in which they were captive since late last month.

The 12-member “Wild Boars” soccer team and coach had gone exploring after practice on June 23 and failed to return.

Earlier on Tuesday, Fox reported that an 11th child was pulled to safety after making the arduous journey through murky waters in what is the third day of rescue operations.

Three divers and a diver-doctor remain in the cave, as they have since the group was discovered on July 2 by two British divers.

The coach is a former Buddhist monk who reportedly encouraged the boys to meditate to persevere in their dark surroundings with little-to-no food and water for more than a week.

The boys reportedly did not know how to swim prior to their rescue by Thai Navy SEALS and other expert divers from around the world.

Several of the boys may be suffering with pneumonia, Fox reported just after 8:00 a.m. EDT.  Those rescued earlier are quarantined to screen for diseases and other health risks, the BBC reported.

“We’re not sure if this is a miracle or what,” the Thai Navy SEALS Facebook page reads at 8:15 a.m. EDT.  “All the thirteen Wild Boars are now out of the cave.”

One Response to "Report: Last Team Members and Coach Rescued from Thailand Cave"