“NO ONE IS HOLDING THEM ACCOUNTABLE” 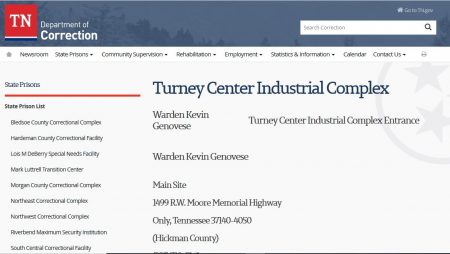 (Jul. 9, 2018) — Beth Haycraft, wife of TDOC inmate Michael Haycraft, on Monday produced a 21-minute video about her husband’s present situation at the Turney Center Industrial Complex (TCIX) in Only, TN which she had previously reported as precarious because of his placement in a cell with a “violent” and “deviant” offender.

She told us that not only was her husband’s new cellmate violent but also reportedly receives medication to treat what might be schizophrenia.

Haycraft’s move to the cell in the Protective Custody (PC) unit of the prison occurred last month, with Monday’s video reporting that he “finally got a cell change” after submitting multiple requests for relocation.

The video can be viewed here:  https://www.youtube.com/watch?v=0VdiAQ2W898

The first video bearing the introduction, “In his own words,” is here:  https://www.youtube.com/watch?v=5cvZUQLgiE0

Her husband’s repeated requests for a cell relocation were followed by retaliation on the part of correction officers, Mrs. Haycraft said, before his most recent move.

A Christian believer, Mrs. Haycraft advocates for treatment of the mentally-ill rather than imprisonment, particularly when an offender is non-violent.  In April she was hopeful that Michael might be released on parole or, absent that, be relocated to the Northeast Correctional Complex (NECX), where she said mental-health services are better than at other Tennessee prisons.  It is also the closest to her home in Virginia.

As she has in the past, Mrs. Haycraft stated her support for correction officers’ wearing of body cameras so that inmates are not abused, as dozens of reports received by this publication over more than three years allege.

“I have seen other inmates that had the bruising and stuff where they were beaten by officers,” Mrs. Haycraft said at 11:20 in the video. Michael had said that what they do a lot of times, they take these people out of camera sight; they use body shots so that a lot of bruising is not obvious; they put them in – they call it – the hole, which is segregation, until they heal, and then they let them back out, because no one is holding them accountable.  That’s assault,” she said.

She maintains that such treatment, which her husband has allegedly received, “is not helping the mental illness at all.”