INMATE:  “YOU NAME IT, THEY’RE VIOLATING IT” 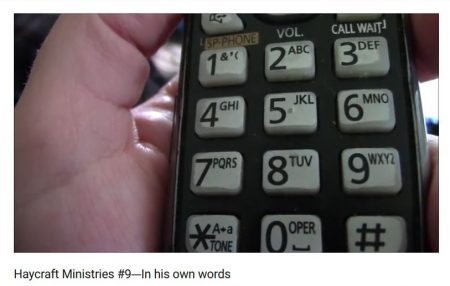 (Jun. 19, 2018) — Beth Haycraft, wife of TDOC inmate Michael Wayne Haycraft, #277811, has produced a video containing her husband’s explanation, in his own words, of his current situation at the Turney Center Industrial Complex (TCIX) located in Only, TN.

Haycraft was relocated shortly after an April 10, 2018 parole hearing which ruled against his release.  As his wife lives in Virginia, both had hoped that he would be relocated to the prison nearest to her, the Northeast Correctional Complex (NECX), where he had been before and which offers better mental-health services, according to Mrs. Haycraft.

In a number of previous articles, Mrs. Haycraft has detailed the mental illnesses from which her husband suffers attributed to abuse and trauma she said he suffered as a child. An advocate for greater public awareness of the plight of mentally-ill individuals who end up in prisons without sufficient intervention programs, Mrs. Haycraft has written to the Tennessee Board of Parole and other Tennessee state officials to request help for Michael, who she reports goes in and out of “crisis,” depending on the rise of external stressors in his environment.

Mrs. Haycraft said her husband’s condition worsened while he was placed in protective custody (PC) for six months in his previous facility, Morgan County Correctional Center (MCCX).  At TCIX, he was automatically placed in PC.

The video begins with Mrs. Haycraft’s explanation of “incompatibles,” which refers to gang members who pose a danger to an inmate or inmates, and her husband’s report that he was recently placed in a cell with a “violent offender who has some very deviant behavior.”

Mrs. Haycraft, who worked for three years as a corrections officer in Virginia, has said that Tennessee’s prison conditions are far inferior to the difficult ones in which she worked.

In the video, Michael Haycraft is specific as to the circumstances surrounding a new cell assignment and the denial by correction officers to return his personal property, including a Bible, his toothbrush and other hygiene items.  He identifies correction officers who he said were involved in the new cell placement with “gang members” who he said have caused him to feel “threatened.”

Haycraft was threatened by gang members at MCCX, causing him to be moved to the PC unit.

TDOC policies allow for the possession of approved items, which can include musical instruments, tape players, legal materials, and televisions.

In addition to the video, Mrs. Haycraft wrote to three Tennessee officials of the information her husband provided.  “STG” stands for “security threat group,” a formal term for “prison gangs.”

At 49:17, Haycraft acknowledges that he has “made mistakes” but asks prison staff to “treat me like a human.”  At that point, Mrs. Haycraft asked her husband to describe his offense, which he said was that he was charged with minor crimes in Dyer County and later in Sullivan County with “aggravated burglary.”

Michael Wayne Haycraft was transported to the Turney Center Industrial Complex (TCIX) April 13, 2018, after denial of parole for the third time on April 10, 2018.  Michael has been in protective custody (p/c) since October 5, 2017, after wrongful dismissal from Therapeutic Community (TCom); he was 14-16 days away from graduation.  I have power of attorney for Michael and requested copies of his progress notes from the program but was denied.  He has requested the ability to review his documentation but as of this writing that has not happened.

On April 15, 2018, Michael was instructed to pack his belongings to be moved to Unit 4B.  Michael stated that he would be placed in danger in that housing unit due to gang members being housed there.  STG Coordinator Clint Zyla had spoken with Michael in May (time approximate) and verified that the Vice Lords and Crips had a kill on sight order against Michael.  Zyla told Michael that there was no prison in Tennessee he could be placed that he would not be in p/c.  Zyla also verified that Michael had been assaulted in 2000 while at South Central which resulted in knife injuries.

Michael was told by an officer at TCIX that he could either go willing or forcibly to Unit 4B.  Michael carried his property to Unit 4B but was so weak from 8 months on being locked down 23-24 hours a day he stated he almost passed out.

He was placed in a cell 129 in Unit 4B.  Michael was warned by Cpl. Walters that the inmate in the cell had deviant sexual behaviors toward medical staff.  Within minutes of being in the cell, the other inmate told Michael that he could not cell with a Caucasian.  Michael relayed this information to Cpl. Walters who told Michael she had no other place in the unit to house him.  She moved Michael back to 5D.  Michael did not receive his property following the move back to 5D.  He later received a Class C write up for refusing cell assignment even though he did not refuse the assignment.  A document notifying of the write up was placed under his door with ‘refused to sign’ circled; no one asked Michael to sign the document.

Michael had a disciplinary hearing June 18, 2018 and was given a verbal warning; the charge should have been dismissed due to improper procedure.  He was not given any documentation to appeal the decision.

Michael has been denied any property since June 15, 2018, which includes hygiene and religious materials.  Over the weekend, Michael asked numerous times for his Bible and was denied.  At the time of this writing, he is wearing the same clothing since June 15, 2018.  It was told to Michael that Unit Manager David Gary had ordered that Michael was not to have any property and was placed on property restriction until he agrees to go to Unit 4B.

This is unacceptable on any level.  To place Michael in a housing unit with gang members is reckless endangerment, deliberate indifference and cruelty to a mentally ill inmate.