WHERE ARE THE MEDICAL RECORDS? 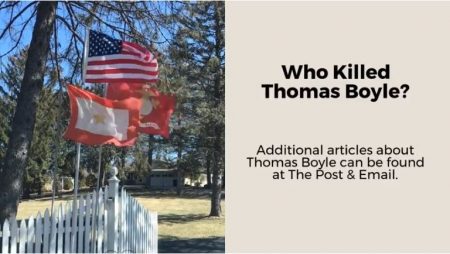 (Jun. 25, 2018) — The fourth installment of a video series depicting the cloudy circumstances of the 2012 death of civilian contractor Thomas J. Boyle, Jr. focuses on taxpayer-funded reimbursement to an insurance company which may not legally be owed the money.

Life insurance benefits which Mr. Boyle’s widow believed should have been payable were denied on the basis that her husband’s policies had included a “war risk exclusion.”  However, the basis upon which taxpayer reimbursement is now being made to Zurich American Insurance Company coordinating with the U.S. Department of Labor to pay death benefits to Mrs. Boyle is that her husband died as a result of a “war risk hazard.”

Three different death certificates issued by the U.S. military bearing three different causes of death are at odds with the results of a second, independent autopsy Mrs. Boyle commissioned after she received information contradicting the Army’s narrative of the cause of Mr. Boyle’s death.

Any medical records provided to the DOL and Zurich American by Mr. Boyle’s former employer, L3 Communications, have not been provided to Mrs. Boyle, although she did obtain a report stating that there were no injuries or deaths as a result of the June 19, 2012 insurgent attack after which Mr. Boyle was declared deceased. 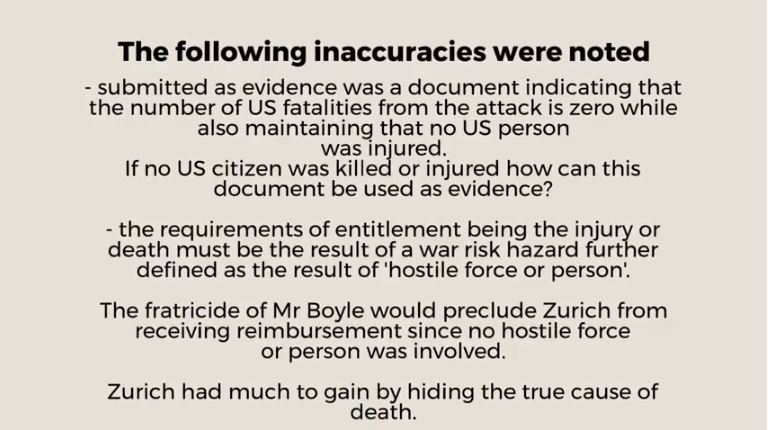 Mrs. Boyle has made Zurich American and DOL aware of the discrepancies in reports issued by two of her husband’s life insurance carriers claiming that his death was “accidental,” not caused by an act of “war,” but has observed no curiosity or intent to investigate on the part of either.