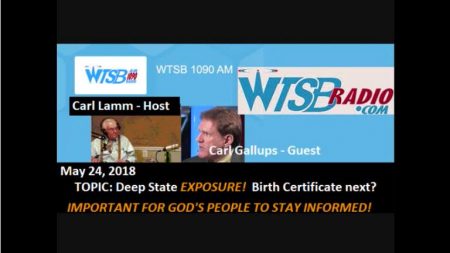 (May 25, 2018) — In a Thursday interview on WTSB radio with host Carl Lamm, radio host, author and pastor Carl Gallups said that he believes that President Donald Trump’s requested investigation into reports that the FBI dispatched an informant to glean information from his campaign will “run slap into the wall of the birth certificate.”

A few seconds later, Gallups revealed new information about the five-year investigation conducted by former detective Mike Zullo into the image posted at whitehouse.gov said to represent Obama’s “long-form” birth certificate from Hawaii:  that Zullo “is sitting on information showing that the CIA had its hands on that birth certificate before it was even posted to the White House website.  He has the digital and hard-copy information to prove that.”