QUESTIONS IF “DEPARTMENT FOLLOWING ITS OWN REGULATIONS”

(May 19, 2018) — On Thursday Senate Judiciary Committee Chairman Charles Grassley (R-IA) sent a letter to Deputy Attorney General Rod Rosenstein requesting to see an unredacted version of an August 2, 2017 memorandum to Special Counsel Robert Mueller whose existence was not known until early last month.

Rosenstein hired Mueller on May 17, 2017, six days after he recommended in a letter that then-FBI Director James Comey be fired, to oversee the FBI’s investigation into whether or not anyone in the Trump campaign “colluded” with Russians and the degree to which Russian operatives may have attempted to influence the 2016 election.

While Grassley’s seven-page letter is not also formally addressed to FBI Director Christopher Wray, all successive pages indicate that he was copied on it.  Ranking committee member Sen. Dianne Feinstein (D-CA) is also copied, as is customary.

The scope of Rosenstein’s appointment of the Special Counsel was stated in “Order No. 3915-2017” whose stated purpose was “To investigate Russian interference with the 2016 presidential election and related matters.”   Because Attorney General Jeff Sessions had recused himself from all matters pertaining to Russia given his position as an advisor to the Trump campaign, Rosenstein was designated in the directive as “Acting Attorney General.”

As referred to on page 3 of Grassley’s letter, the “Appointment Order” included within the Special Counsel’s scope “any matters that arose or may arise directly from the investigation;” and “any other matters within the scope of 28 C.F.R. § 600.4(a).”

Rosenstein’s August 2 memorandum did not come to light until it became part of the government’s rebuttal to a civil case brought by former Trump campaign manager Paul J. Manafort, Jr. claiming that Mueller’s prosecution of him for alleged financial crimes dating back more than a decade is beyond the scope of the Special Counsel’s probe.

A large swath of the three-page August 2 memo released to the public is redacted, as are other smaller portions.

In his letter Grassley suggested that the existence of the August 2 memo, unknown to Congress and the public until early April, rendered “secret” the Special Counsel’s ongoing activities.  “…the public, Congress, and the courts all thought the scope was one thing, and have now been informed it is something else,” Grassley wrote of the differences in the two memoranda. “For that reason and others, it is unclear precisely how, or whether, the Department is following its own regulations, what the actual bounds of Mr. Mueller’s authority or, and how those bounds have been established.”

On May 4, 2018, U.S. District Court Judge T.S. Ellis gave Mueller’s team two weeks to submit an unredacted copy of the same memo to his chambers after he bluntly admonished, during a hearing concerning the criminal charges brought against Manafort, that it appeared to him that Mueller was prosecuting Manafort to effect the “impeachment” of President Donald Trump.

In his letter to Rosenstein, Grassley wrote that because of its nature, a Special Counsel investigation has the potential to “evolve beyond its original parameters to capture additional, tangentially related matters,” invoking Kenneth Starr’s role in the Office of Independent Counsel in the death of then-White House counsel Vince Foster and the Clintons’s investments associated with the Whitewater real estate matter.  Grassley contended that as a distinct branch of the government from the Judiciary and having oversight over the Executive branch, Congress, and his committee specifically, should be permitted access to the complete memorandum by the Justice Department. 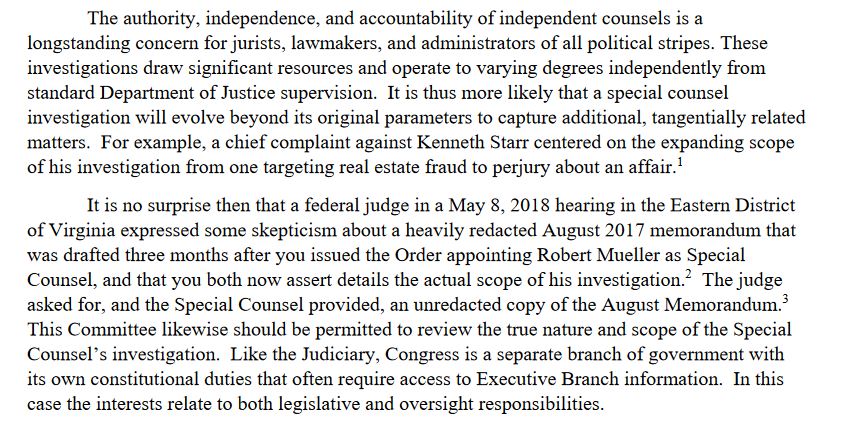 On pages 3 and 4, Grassley enumerated what he views as inconsistencies between the May 17, 2017 memorandum and the August 2, 2017 memo in the stated scope of the Special Counsel’s responsibilities. 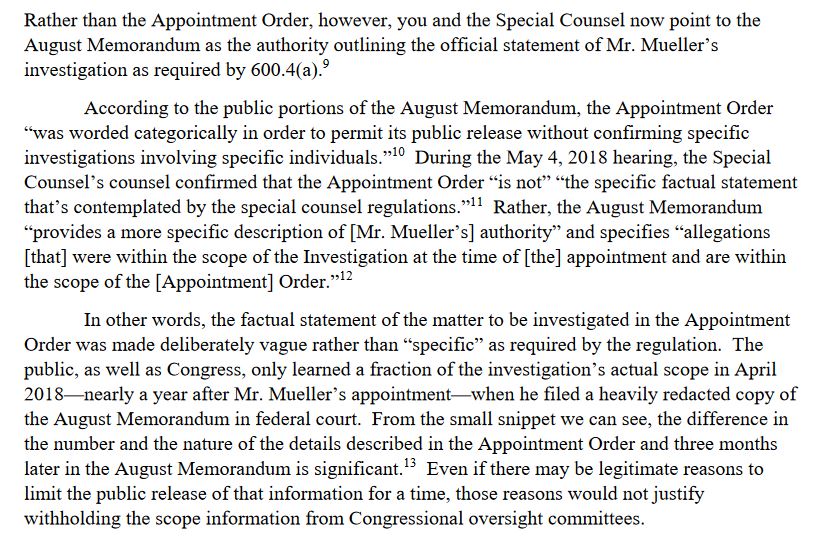 On pages 4-7, Grassley provides a list of 16 questions, including subsections, as well as a May 31, 2018 deadline for Rosenstein to respond.