“IT’S THE SPOUSE THAT’S THE KEY” 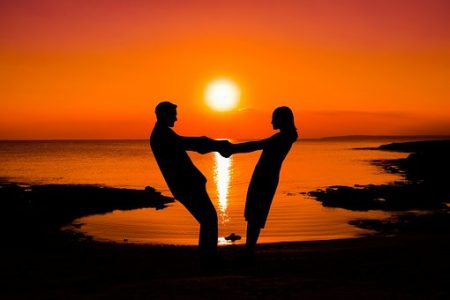 (Mar. 29, 2018) — “Good evening, ladies and gentlemen, and welcome to “The Pulse of the Nation.’ I’m your host, Mr. Roving, and with me here, at the university, is our good friend, renowned author and recent advisor to our government, Professor Zorkophsky. But first, let’s show a commercial and then get on with the show.”

“And we’re back. Welcome, Professor Zorkophsky.”

“Please, Roving, call me ‘Zork’; no need for formalities.”

“Of course; ‘Zork’ it is, then. Well, Zork, it looks as if your bestselling book, ‘The Shell-Shocked HAVE No Future,‘ has made it to Hollywood, or is that just gossip?”

“No, just another way to hype up sales by the publisher. You see, once a rumor starts about a movie deal, everyone wonders who they’re going to pick for the hero and the heroine and the book sales really pick up. If the rumor was true – but then again, it wouldn’t be a rumor, now, would it? – I’d pick Joel McCrea and Loretta Young, but, unfortunately, they’re not available, but they were patriots; I wouldn’t want any Socialist idiots in my picture, that’s for sure.”

“So there’s a girl in the picture?”

“There’s always a girl somewhere in the history of a Veteran doing away with himself, trust me on this one. You see, this is how it works. First of all, I just write about stress derived directly from combat, and not from a DI yelling at the recruit, or a house fire, or a mother dying, or anything else traumatic happening under the sun, including getting hit by lightning.

“I just treat those with combat-related PTSD. I break the combat subject down into three basic parts: Beyond Line of Sight; Line of Sight; and Hand-to-Hand.”

“Explain ‘Beyond Line of Sight,’ if you would, please.”

“The best example that I could come up with is of a weapons officer in charge of the nuclear warheads aboard a Boomer Submarine. Maybe he’s worried about how much devastation they could cause and takes it to the nth degree and worries about it; does that answer your question?”

“Okay, okay; I get it. So are there any worse forms of PTSD? I mean, are some not so bad?”

“No, they’re all pretty devastating, even an automobile accident or a pet dying can be so traumatic that it leads to abnormal behavior. But, as I said, or if I didn’t I might’ve implied, that every form of PTSD has it’s own signature, if you will.

“Getting back to our military, these guys and gals swore an Oath to defend the Constitution. The law of the land is the Constitution that we agree to follow equally, so how do you expect our PTSD-inflicted Veterans to behave when you allow illegal immigrants – DACA and ‘dreamers’ – to be in our country?

“Not only that, but there’s talk about amnesty. Now these guys and gals, and especially the ones that did hand-to-hand combat — that actually put their lives in jeopardy, for real — and then they come back to The World and hear actual conversations about making illegal immigrants legal citizens — it’s just a little bit too much to swallow. It’s like saying your time fighting for your country was just one big colossal waste, just one big joke, and wasn’t everyone else a lot smarter who didn’t serve? Like, ‘What did you do that for?’ ‘Nobody cares,’ or ‘Don’t you get it?’

“The ones who have it the worst are the ones who went the extra mile and maybe got maimed or hurt in other ways. Those are the ones who make up the 22+ suicides a day. The number is higher, but the government hides the real number by attributing other causes of death to ‘overdoses’ and ‘gun and automobile accidents.’”

“So, I’m not sure what your point is. You say you write about it but then what? Can these people ever find happiness?”

“Doubtful, although some try awfully hard to live a normal life, but it’s not easy. They’re searching for their lost humanity. If they go to the VA they’re prescribed pills to make them zombie-like in order to block any nightmares they may be experiencing. It certainly isn’t easy.”

“No, I wouldn’t think it would be. So what’s the solution?”

“A loving spouse; someone who they can open up to; someone they trust. And that’s the key: trust. There’s no doubt they need a helping hand, and pills shouldn’t play a part. No, it’s the spouse that’s the key.”

“Really, now. So what happens when a divorce happens?”

“That’s when they’re most likely to eat a bullet.’”

“And the significant other knows this?”

“You bet. Look around at all the illegal immigrants protesting this and that, and the paddy wagon isn’t there rounding them up. What about the Muslims? Answer this: soldier just back from Iraq or Afghanistan and sees someone dressed in a full-fledged burqa in the grocery store: is it a man or is it a woman? Does it have a knife and if so, how long? Is it carrying an AK-47 and if so, how many bandoliers? Does it have grenades? Does it have a suicide vest? No wonder our Vets go bonkers.”

“We’re just about out of time, Zork, so how about summing it all up for us?”

“Be glad to. First, flush the pills. Second, find a spouse, because if you think you can do it alone, you can’t. And lastly, if the spouse cheats and then gets a divorce and then calls you while you’re at work — just to rub it in — get to a church and pray for just a little bit more strength to make it through another day. And on a last note: Jesus was beaten and crucified for being the good guy, the best, so thank your lucky stars that he went through all that turmoil so you don’t have to.

“And here’s the very last note: this is for the guys who were forced to give up their humanity and get down to the basics of survival. First of all, training and attitude are the keys to surviving; add adrenaline and it’s amazing how fast a ‘civilized’ person can become a ‘savage.’ We define ‘savage’ as a person devoid of humanity; humanity is the ability to demonstrate apathy towards another human; apathy is the ability to transfer your own feelings and aspirations to another.

“We hear reports of ‘Muslim Rape Gangs,’ but in a Muslim country, or areas that are controlled by Sharia Law, such behavior – like ‘Muslim Rape Gangs’ — is normal and not ‘savage.’ The Muslims who killed the children in that school in Beslan, Russia, were acting like any normal Muslim would act, but we call such atrocities ‘savage.’

“And therein lies the dichotomy between the two; between Islam and Western Civilization; between what we consider ‘savage’ and the followers of Islam consider everyday normal behavior. In Western Civilization a woman’s word is equal to a man’s; Islam states that it takes two women to equal one man as a witness.

“Furthermore, if a woman is raped she will most likely be put to death by her family in the form of an ‘honor killing’* for bringing ‘dishonor’ upon the family. Muslim men are allowed to ‘marry’ girls as young as seven and are allowed to ‘honor kill’ girls even outside their family; for example. if a girl refuses marriage or is seen ‘looking at a boy.’

“Muslims who have immigrated to Western countries ‘honor kill’ their daughters for becoming ‘too westernized.’ So the long and short of it is this: Islam is an anti-woman political philosophy where the sexes are not only segregated, but men are sanctioned by Sharia Law to lord over women and do whatever they want to them, including beating, torture and murder. There are no restrictions to what men can do to women in Islam.

“There is no way possible for Islam to coexist with any other philosophy of life. One is either a Muslim or one is dead. And our soldiers that come out of the quagmire know this, and they come back to the USA and see our 22+ Islamvilles (that the FBI seems to ignore); see burqas everywhere; see men wearing beards** on television commercials; and they can’t help being reminded of the hellhole they just got out of. And we’re not helping much because we allow the enemy — Muslims — of Western Civilization among us. I hope I explained it all clear enough.”

“I think you did just fine, Zork. Okay, I guess that sums it up. Thank you much; a lot more information than we bargained for. And so, on behalf of a tired crew, I’ll be wishing you all a goodnight: Goodnight.

“Gee, whiz, Zork, long show. I hope it helps someone who needs a helping hand. Burger time: my treat.”

[**beards: for those who were paying attention, the complexion of advertising changed overnight as soon as the de facto president (Barry Soetoro/aka Obama) took office. The advancement of accepting Sharia Law has been subtle on one hand, yet in your face on the other. The percentage of male actors in television commercials wearing beards has increased tenfold since January 20, 2009; likewise, the number of mixed couples in television commercials and background views of hijabs and burqas has increased so much, in fact, that today’s pastime is to ‘find the Easter Egg,’ a reference that should not (unfortunately) need explanation.]