“THIS IS AS BAD AS IT GETS” 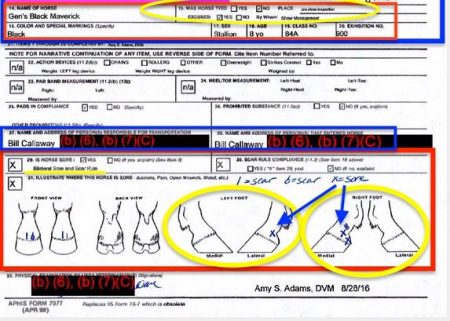 (Mar. 25, 2018) — On March 21, 2018, horse-welfare activist Clant M. Seay announced on his BillyGoBoy.com website that documents he had sought from the U.S. Department of Agriculture (USDA) through a Freedom of Information Act (FOIA) request last September were made available to him beginning on March 15.

In 2015, Seay organized the Citizens’ Campaign Against Big Lick Animal Cruelty (CCABLAC) targeting the practice of “soring” of Tennessee Walking Horses and other gaited breeds, a practice rendered illegal by the federal Horse Protection Act of 1970 (HPA).  Activists gather outside of horse shows where the competing animals have allegedly been sored in order to make them step higher in the show ring.

CCABLAC members also seek to educate the public about the soring industry, which is found mainly in the Southeastern U.S., as to the hazards of the secretive process handed down through generations of trainers to produce a prize-winning horse and its accompanying fame and fortune.

Seay had sought documents relating to USDA allegations made against Mr. Bill Callaway for entering horses in shows which had allegedly been sored.   The substance of his FOIA request dated September 8, 2017 reads:

The USDA responded that the release of the documents could constitute a “violation of individual privacy” and “could deprive a person of fair trial or impartial adjudication.”

Although Seay argued that the matter had already been adjudicated and a consent agreement reached under the cited docket number, the USDA refused to change its position.

The HPA is overseen by the USDA’s Animal and Plant Health Inspection Service (APHIS) division.  A post updated at the sub-agency’s website dated February 14, 2018 states that “Soring is a cruel and inhumane practice used to accentuate a horse’s gait. It is accomplished by irritating or blistering a horse’s forelegs with chemical irritants (such as mustard oil) or mechanical devices.”

Some trainers who previously took part in soring have spoken out about it in the midst of a number of claims that it no longer occurs.  Seay and his supporters maintain that the artificial gait produced by the process, “the Big Lick,” remains coveted by certain horse-show judges and is systemic in certain sectors of the industry.

In addition to chemical treatment of the forelegs, inserting marbles or other objects into the horse’s front hooves and attaching “stacks” and chains can also be components of soring to cause maximum pain so that the horse lifts his front legs high once they strike the ground.

ABC News, including Maury Povich, and the Humane Society have publicized the practice of soring and other forms of animal cruelty which sometimes accompany it in order to produce a potentially prize-winning Tennessee Walking Horse.  The exposure of former trainer Jackie McConnell and two associates in 2013 has been termed an anomaly by some in the industry who claim that horses are not harmed by the use of stacks and chains and that they are not in pain when competing.

After exhausting the standard FOIA appeal process, on February 1 Seay filed suit in the U.S. District Court for the Northern District of Mississippi in case #3:18CV26 M-V.  A PRNewswire press release dated February 3 announced the lawsuit and deemed it the result of Seay’s First Amendment rights having been violated by the agency for refusing to release the requested documents.

Absent their release, there was to be a hearing on March 22, 2018 at 2:00 p.m. at the U.S. District Court in Oxford, MS, with Judge Michael P. Mills presiding, on Seay’s Motion for Preliminary Injunction.  Mills had set the hearing on an expedited schedule, allowing the defendant only 14 days to file a response or provide the requested documentation. Normally, the government has 60 days to respond when it is a named defendant.

Seay received an initial document release on March 15 consisting of the USDA complaint against Callaway followed by a detailed summary of allegations on March 21, negating the need for the hearing the following day.  The documentation details alleged multiple violations of the HPA on the part of Callaway and the owners of Tennessee Walking Horses over a 5+-year time frame.

In his video released on Wednesday, Seay held up what he said is “the smoking gun” showing that the world grand champion of last year’s Shelbyville, TN “National Celebration,” Gen’s Black Maverick ridden by Callaway, was found by USDA inspectors to have been barred from competing in the same show due to evidence of soring the year before.

On September 5, 2017, Seay broke the story that Callaway had ridden Gen’s Black Maverick to victory in the Celebration and the very next day began serving an eight-month suspension for allegedly entering sored horses in shows.

Mike Inman, manager of the National Celebration, has told this writer that horses entered in the competition are checked at a variety of levels to ensure that they are sound.  Last year The Post & Email unsuccessfully attempted several times to obtain comment on the practice of soring generally from the Tennessee Walking Horse Breeders’ and Exhibitors’ Association (TWHBEA).

Of the revelations contained in the documents, which can be reviewed at the BillyGoBoy website here, Seay said:

They’ve been saying Jackie McConnell was one bad apple, that “This is the exception and not the rule.”  But when you have the world grand champion sore, bilaterally – that’s two feet, with “Xs” – and you have the USDA vet report, that is the gold standard, because that is what the prosecuting attorney, Ms. Colleen Carroll, used to prepare the complaint with all those charges.

She’s a thorough, competent, excellent prosecutor; she detailed everything regarding the history.  All those horses came from one barn, every one of them; all those people work for Callaway.

You have the trainer, Bill Callaway.  If you look at that picture at TWHBEA, it’s a family affair.  There is his brother, John Allen; his mother, Karen; his father, Allen; and then there are Keith and Lorraine Rosbury, Gen’s Black Maverick owners.  All of them have served federal suspensions as a result of the bilateral soring of the horse that became the world grand champion. That is irrefutable proof that it a corrupt animal-cruelty racket.

You can say “bad apple” here or there, but not for the world grand champion.  It doesn’t matter whether it happened when he was crowned; that horse has been sored since they first put a saddle on his back.

The fight we’ve made to get that record — we had to wait, plead, beg and finally sue, and we had one judge from northeast Mississippi, Itawamba County, who had the courage to hold them to account.  He set this for a quick hearing, and the assistant U.S. attorney did his job — his name was Sam Wright — he came on March 15 with the complaint, and then he went back, because I’d asked for the underlying charging documents relating to the complaint, and he got them.

It will be there for all time when they try to go before a congressional hearing or the editorial board of a newspaper. They can’t claim it’s one bad apple or this is an exception. It is an animal cruelty racket, period.

CCABLAC has been working to educate the public about soring and its members have undergone threats to their physical safety during protests at various horse shows.

The Citizens’ Campaign is having a huge impact, and we’re going to take them down.  We’re not quitting; we’re getting stronger.  We’re going to try to see that this goes retail in Middle Tennessee; we’re going to go to these small towns to appeal to these communities to just walk away from this.  Find something else; go to a tractor pull or something that doesn’t involve animal cruelty.

Seay predicted that the practice of soring will “soon be over, with the way things are moving in the country.”  He cited the fact that a horse show in Lynchburg, TN and another at the University of Mississippi have been canceled permanently and that the show at Panama City Beach, FL will not take place this year.  “They tore the ring down,” Seay said.

Seay said his organization’s ultimate goal is to “quarantine” “Big Lick” horse shows onto private property.  “We have largely been able to do that.  In my lifetime, I remember when they had shows in Atlanta, Montgomery, Jackson, and Little Rock.  Those are capitals of Southern states.  They don’t have them anymore.  They used to have them in Nashville and Murfreesboro at NTSU.  They have had to move shows away from public venues; for example, the Columbia, TN venue; they moved the show from Florida up there, but they moved it to Shelbyville because they can’t withstand the public scrutiny.”

Seay added that out of all of the FOIA requests he has made previously to the USDA, he has never before received a detailed assessment of an inspection such as that which was released in the Callaway case.  He said that the report showing bilateral soring of Gen’s Black Maverick’s front hooves is “as bad as it gets.”