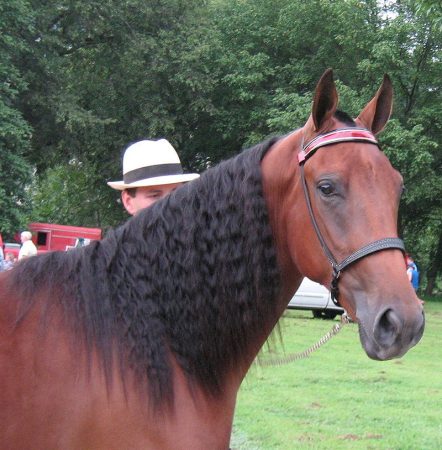 (Dec. 24, 2016) — On Saturday morning, The Post & Email received a response from “National Celebration” CEO Mike Inman to our inquiry of Thursday as to whether or not all horses participating in the event are inspected for signs of abuse, including “soring,” before competing.

The National Celebration is an event featuring Tennessee Walking Horses and other breeds held in Shelbyville at summer’s end each year.

Soring is a well-documented process whereby chemicals are applied to a horse’s pasterns to cause irritation and pain so that it will step higher during competition.  After a 2010 Inspector General’s report showed that “industry” inspectors were ineffective in detecting soring or prohibiting a sore horse from competing in keeping with the Horse Protection Act of 1970, the USDA began studying the issue.

Over the summer, the USDA’s Animal and Plant Health Inspection Service (APHIS) convened a series of online and in-person forums with interested parties to discuss whether or not a “rule” change to more effectively enforce the law were in order.

Some Tennessee Walking Horses are equipped with “stacks,” or platform shoes, plus ankle chains which cause the horse to lift its front legs higher than it normally would.  It has been reported that over approximately six decades, the application of chemicals to the horse’s legs prior to its being outfitted with “action items” such as stacks and chains became widespread in certain areas, particularly in the South, with the purpose of winning horse show titles and prize money.

In the spring, cruelty-prevention advocates were hopeful that the current administration would take action given the meetings and proposed rule change.  An open comment period set to end in late September was extended by 30 days to October 26, heavily-lobbied for by “industry” members through a law firm, as stated on the National Celebration website.

The National Celebration has said that a ban on the devices would “have devastating impacts” on the industry.

After the proposed regulation changes were announced, the American Horse Council acknowledged them but did not issue an opinion.  However, its statement read, “The AHC opposes soring and continues to strongly support the PAST Act (S. 1121/ HR 3268) that will strengthen the HPA and finally end the soring of Tennessee Walking Horses, Racking Horses and Spotted Saddle Horses.”

The PAST (Prevent All Soring Tactics) Act failed to pass in Congress between 2013 and this year.

A number of individuals submitting comments to the USDA were concerned that the proposed rule change is overly broad and could potentially ban hoof pads necessary for a horse’s soundness and comfort.  One Celebration attendee perceived that inspectors utilize subjective and inaccurate means of detecting soring and possible accompanying scars.

American Saddlebred Horse Association representatives Bill Whitley, Rob Byers and Sandra Currier attended the August 10 listening session in Lexington. Newly elected President of the American Farriers’ Association Jon Johnson was also in attendance in Lexington and gave comments opposing the proposed rule. The impact of the new rules would be harmful to farriers and the currently allowed shoeing regulations in the Horse Protection Act have been proven by the USDA and other studies to cause no harm to horses.

On August 20, 2014, WSMV Channel 4 in Nashville reported that beginning that month, “a veterinary advisory council will be inspecting the horses” at the National Celebration in the wake of concerns raised with APHIS.  The council was to “inspect the first place winners and two other horses in every category.”

The Tennessee Department of Agriculture has said that it opposes soring or any type of animal abuse and that horse shows are a mainstay of the state’s economy.

According to Concerned Citizens Against “Big Lick” Animal Cruelty (CCABLAC) founder Clant Seay, “Gen’s Ice Glimmer,” a horse shown all over the state of Tennessee for a number of years, was auctioned for slaughter in July of last year after becoming useless to its previous owner or owners.  Glimmer is now reportedly recovering at an undisclosed location in “middle Tennessee.”

The “Big Lick” refers to the exaggerated gait of horses who could have been sored and are outfitted with “stacks” and chains to compete.

The Tennessean has also covered the controversy over the training, showing and potential and actual soring of Tennessee Walking Horses as demonstrated by a former trainer.

In August, Seay, a retired attorney, filed a federal lawsuit against Maury County Sheriff Bucky Rowland for allegedly violating his First Amendment and Fourteenth Amendment right to take video footage at the Columbia Spring Jubilee Horse Show in a public park on June 3 of this year.

In a recording of the confrontation that day, Rowland is heard telling Seay and his supporters that “reproduction” of the event could violate copyright and result in a “civil or criminal suit.”  Seay claims that “Big Lick” proponents influenced Rowland to warn him to turn off his video equipment.

There have been other confrontations, some potentially deadly, between “Big Lick” opponents and supporters.

According to the Shelbyville Times-Gazette on December 1, the USDA issued “two statements” indicating that ongoing inspections would be coordinated by “field operations teams” rather than by APHIS’s headquarters in Riverdale, MD.

The Times-Gazette helpfully provided a link to the letter sent to “horse show managers” and others by Bernadette Juarez, Deputy Administrator, Animal Care division of APHIS.  Without announcing any formal decision, Juarez wrote that “we are carefully considering all comments as we proceed with our deliberations.”

The letter does not appear to have been posted at the USDA web page dealing with the issue, and although registered for news updates, this writer has not received a notification of any formal change, which would be published in the Federal Register.

According to Seay in a change.org petition and on his blog, “Mr. Hugh Jones, Publisher of the Shelbyville Times-Gazette, whose Rust Communications affiliated newspaper is a ‘Proud Sponsor of the ‘Big Lick’ Animal Cruelty at the Tennessee Walking Horse National Celebration,” declined to accept an advertisement Seay wished to place alleging that Shelbyville and surrounding areas have suffered from the “dark shadow” he claims engulfs it as a result of the “Big Lick.”

In our email to the National Celebration, we asked:

Is there an inspector at the National Celebration to examine all horses entered in the competition to determine whether or not they have been sored?

I have a statement from Corinne Gould of the Tennessee Department of Agriculture saying that “The Tennessee Department of Agriculture (TDA) does not support soring or abuse of any livestock for any reason at any time. Equine associations governing all breeds of horses and disciplines require that show horses be sound. The concern for soundness crosses all sectors, regardless of any style of shoe or equipment used in the ring.”

There is also a statement from former trainer Barney Davis who was sentenced to a year in prison for animal cruelty that the Tennessee Walking Horse will not perform the “deep walk” without having been sored.

The TWHBEA has not responded to my several requests for comment on soring in the industry.

I would appreciate a response.

Yes. Between the HIO inspectors and USDA VMOs there are over 20 inspectors and each horse goes through as many as 13 separate inspection protocols before competition. Further the top three placing horses undergo re inspection after they compete. Mr. Davis, never a member of the professional trainers or breeders association is banned for life from competing from participation in the major HIO affiliated shows and is not a credible source.  By law, every walking horse must be inspected for compliance with the Horse Protection Act as well as the winning horse is required to undergo re inspection after the class. The Celebration voluntarily exceeds these requirements at our event. Thank you for your inquiry.