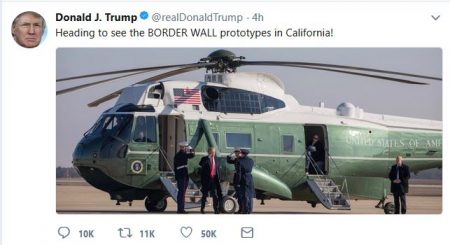 (Mar. 13, 2018) — Pro- and anti-Trump rallies are taking place recognizing President Donald Trump’s first visit to the State of California to take stock of eight border-wall prototypes in support of his “Build the Wall” campaign promise.

Live footage of the Trump-supportive gathering was posted on Periscope here.  The rally featured several congressional candidates and a number of other public office-seekers.

A protest to Trump’s impending arrival was held Monday in San Diego, and on Tuesday both supporters and detractors gathered at the site of the wall inspection in Otay Mesa.  At approximately 2:43 p.m. EDT, protesters were reported to number “several dozen.”

Prior to his arrival, Trump tweeted:

Trump heavily campaigned on his pledge to build a physical wall between Mexico and the U.S. to deter the entry of illegal aliens.