“POLITICAL DIRT” USED TO “SPY ON THE TRUMP CAMPAIGN” 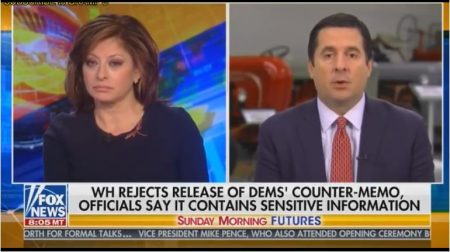 (Feb. 11, 2018) — On FNC’s “Sunday Morning Futures,” U.S. House Permanent Subcommittee on Intelligence (HPSCI) Chairman Devin Nunes (R-CA22) told host Maria Bartiromo that Democrats on the committee, who issued a “counter-memo” for review and release by the White House last week in response to the Republicans’ memo released on February 2, “packed it full of sources and methods.”

It is well-understood that “sources and methods” are classified information that cannot be made public.

On Friday the White House sent the memo back to the committee to redact the classified information after obtaining recommendations from the FBI and DOJ.

Nunes claimed that congressional Democrats who had fought fiercely against the release of the Republicans’ memo, asserting that it divulged “sources and methods,” are guilty of “doing the same thing.”  The White House declassified the committee Republicans’ memo on February 2.

“The Democrats have been on TV all weekend long; their memo is sitting at the House intelligence Committee down at the bottom of the Capitol waiting to be redacted.  If they really wanted to get it out, they’d be down there all day yesterday [sic]…this is nothing but politics,” Nunes told Bartiromo.

Bartiromo then said it is her understanding that the Democrats’ memo does not refute the Republicans’ contentions that the FBI and DOJ misrepresented the “evidence” they presented with four FISA warrant applications to the FISC (Foreign Intelligence Surveillance Court) to conduct surveillance on informal Trump-campaign adviser Carter Page beginning in the fall of 2016.

The now-infamous “Trump dossier” consisting of 17 documents compiled by former British spy Christopher Steele was uncorroborated but submitted as reliable information to the court.  The fact that the dossier was funded by the Democratic National Committee (DNC) and the Hillary Clinton campaign was not divulged to the court.

The Republican memo claims that when former FBI Deputy Director Andrew McCabe testified behind closed doors to the committee in December, he said that without the dossier, the FISA warrants would not have been granted to gather Page’s communications.

“For a full year, they were spying on an American citizen who was affiliated with the Trump campaign, and the court didn’t know any of that for four times in a row,” Nunes said, calling it “FISA abuse.”

At approximately 5:30 in the YouTube video of the show, Nunes responded to Bartiromo’s question as to whether or not former White House strategist Steve Bannon’s communications had been collected by the FBI with, “We know that anyone who was talking to Carter Page was likely picked up by authorities.”

Nunes then described Page as “a suspect of Congress,” “an interesting individual,” and “a guy who cooperated with the FBI back in 2013.”

“I don’t agree with Carter Page on very much, but the guy shouldn’t have his emails or phone calls listened into or eavesdropped into,” Nunes said.

On Thursday, Infowars’ Dr. Jerome Corsi suggested during the “#WeThePeople PATRIOTS’ SOAPBOX” livestream that a blog post at The Conservative Treehouse contending that Page was a “plant” into the Trump campaign was accurate and that Page is “a Democrat” and product of the “Deep State.”  Corsi has been participating daily in the livestream, deconstructing the postings of an online character who uses the screen name “Qanon.”

On Sunday morning, Corsi said during the broadcast that he believes Qanon is a “military intelligence” figure.

In response to Bartiromo’s question, Nunes said that a memo written by the Senate Judiciary Committee chaired by Charles Grassley refers Steele to the DOJ for criminal prosecution given that he allegedly “lied to the FBI.”

Nunes told Bartiromo that the leak of Lt. Gen. Michael T. Flynn’s conversations with then-Russian Ambassador Sergey Kislyak was “a felony” and should be prosecuted.  Bartiromo responded with “The bottom line is, ‘Where are the charges?'” after stating that several of Hillary Clinton’s close State Department aides allegedly “lied to the FBI” and have not been prosecuted.

Clearly frustrated, Nunes said that as the legislative branch of government, Congress is limited in what it can do in regard to criminal activity which could be prosecuted by the Justice Department.  He called upon American citizens to make their opinions known.

Following a break, Nunes said that he is well-acquainted with Democrat “attacks” and, as a farmer in the Central Valley of California “struggling” against state regulations, specifically in regard to water, is accustomed to confrontation.  “We’re used to getting attacked here in California; there’s been a war on people who actually build things, and grow things, work with their hands…” he said.  “So when they attack me, it means that I know exactly what’s up; it means that they are — we have the facts; they do not, and they don’t want the American people to know that the DOJ and FBI used political dirt from one campaign, paid for by the Democrats, to go and spy on the Trump campaign.”

On March 4, 2017, Trump tweeted that his campaign had been “wiretapped,” but the mainstream media either did not believe him or did not wish to investigate.  On March 16, 2017, Senate Intelligence Committee Chairman Richard Burr and ranking member Mark Warner issued a statement in which they said, “Based on the information available to us, we see no indications that Trump Tower was the subject of surveillance by any element of the United States government either before or after Election Day 2016.”

Bartiromo asked Nunes about the committee’s investigation into possible involvement in disseminating the Trump dossier by the U.S. State Department, to which he said that, “We’ve had numerous people who were at the State Department at the time who are now spilling their guts.”

Nunes then invoked the name of “Cody Shearer,” who investigative reporter Sara A. Carter has named as having been involved in compiling a second Trump “dossier.”  Nunes described Shearer as “a bad guy” and Clinton ally.

At 16:20, Bartiromo asked if “Barack Obama and Hillary Clinton” were “pulling the strings,” to which Nunes responded that then-Attorney General Loretta Lynch and Secretary of State John Kerry were “briefed on the dossier.”

“This is just an extraordinary story,” Bartiromo concluded.