IS THE KEY WITH THE DEPARTMENT OF JUSTICE?

(Mar. 16, 2017) — On Thursday afternoon, Chairman of the Senate Intelligence Committee Richard Burr and Vice Chairman Mark Warner issued a statement contradicting President Donald Trump’s March 4 claim that his office at Trump Tower or his “phones” were “wiretapped” at some point before the November 8 election by Obama.

“Based on the information available to us, we see no indications that Trump Tower was the subject of surveillance by any element of the United States government either before or after Election Day 2016,” The Hill reported Burr as having said.

Soon after Trump made the claim in a tweet that Saturday morning, Ben Rhodes, Obama’s national security adviser, called him a “liar.”

On the evening of March 4, however, several reports were made stating that surveillance of Trump by the Obama regime was likely.

The White House asked the House and Senate Intelligence Committees to add Trump’s claim to their already-in-progress investigations into whether or not the Trump presidential campaign had ties to the Russian government.

After Trump’s surprising Twitter claims, nearly every mainstream media outlet stressed that he had offered “no evidence” to support them.

On Thursday NBC producer Jesse Rodriguez tweeted, without a source link, what appeared to be a written statement by the committee.  However, the website of the Senate Intelligence Committee does not appear to have posted a statement as of this writing.

Late on Thursday morning, the AP posted a one-sentence report which reads, “Leaders of Senate Intelligence committee say no indication of Trump tower wiretapping before or after election.”

The Senate Intelligence Committee itself was the target of surveillance by the Obama regime in 2013, as then-CIA Director John Brennan later admitted.

On Wednesday, House Intelligence Committee Chairman Devin Nunes said,  “I don’t think there was an actual tap of Trump Tower.”

Unsurprisingly, the paper did not report that an image Obama claimed as representing his original long-form birth certificate from the state of Hawaii in April 2011 was later found to be a “computer-generated forgery” by a law enforcement investigation. Forgery of a government document is a felony.

On Tuesday, White House Press Secretary Sean Spicer told reporters at the daily press briefing that he believed Trump “feels very confident that what will ultimately come of this will vindicate him.”

On Wednesday evening, in an interview between Trump and Fox News host Tucker Carlson, Trump said that his use of the word “wiretapping” was intended to mean “surveillance and many other things.”

“I think you’re going to find some very interesting items coming to the forefront over the next two weeks.” Trump told Carlson.

Minutes before this story went to press, CBS White House reporter Mark Knoller tweeted, “Spicer says Pres Trump still stands by charge of wiretapping/surveillance..” and that Trump said that the Senate Intelligence Committee chairmen are “not yet in contact with the U.S. Department of Justice.”

Ten minutes before that, Knoller tweeted: 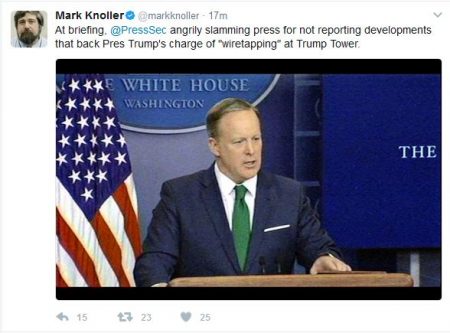 What is the Truth About Trump’s “Wiretapping” Claim? added on Thursday, March 16, 2017

One Response to "What is the Truth About Trump’s “Wiretapping” Claim?"