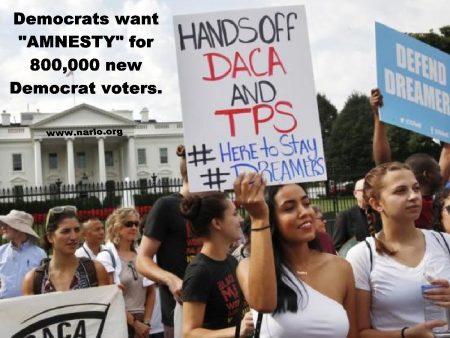 (Jan. 28, 2018) — “The most logical fix for most of America’s fiscal problems would be to pass a law requiring that no recipient of a government handout or benefit could vote on any issue or vote for any candidate that would or could result in an increase in those handouts or benefits, unless the recipient was paying for the handout or benefit in the form of taxes or payroll deductions.” — Ron Ewart

The government shutdown of January 2018 had absolutely nothing to do with principle and everything to do with increasing Democrat votes by “pushing” the Congress to the brink for amnesty for 800,000 DACA children.  They need those votes for the upcoming mid-term elections.  That is why they risked shutting down the government ….. and succeeded.

Anyone who actually believes that the Democrats, or Chuck Schumer for that matter, care about the “Dreamer” children (who are in fact illegal aliens), is living in an alternate reality.  The Democrats care not one whit about the sick, the poor, the downtrodden, the elderly, the disabled, Blacks, Latinos, women, illegal aliens, or even freeloaders, or anyone else who finds it necessary to be dependent on government.  The Democrats only care about the votes they can garner by promising some benefit or cold hard cash, stolen from the public treasury, and handed out to the government dependents in some large constituency group.

Social Security, Medicare, Medicaid, ObamaCare, 80 overlapping welfare programs and all other social programs have their roots in “votes” for the Democrats and maintaining perpetual political power by exploiting a human weakness that leans toward looking for something for “free” from government.

The Democrats’ push for perpetual political power started way back in the late 1800’s with the rise of the Progressive movement.   The movement was bolstered by the 16th Amendment (1913) that gave us the Federal Reserve and the income tax, turning all Americans into indentured slaves for the national debt.  It was then further put on steroids in the 1930’s with FDR’s Social Security, the New Deal and the removal of the gold standard.  Then came Johnson’s Great Society and finally ObamaCare.  None of these programs can be overturned because the recipients of government largess get to vote for their own self-interests ….. with Democrat support, of course.

By the time America reached 2016, all those programs, passed under Democrat control, have shoved America into a massive debtor nation and the potential for national bankruptcy.  These social programs have pitted the producers against the takers and divided the country into haves-and-have-nots, black against white, man against woman, and “illegals” against “legals.”  The fiscal imbalance is so bad that half of the American population, plus all the illegal aliens, are LIVING OFF the producing half.  There is strong evidence that it may even be worse than that.  We keep wondering when the producing half will finally revolt?

As the Democrats and Chuck Schumer were wholly responsible for the January 2018 government shutdown for votes from 800,000 Dreamers potentially receiving amnesty, the Democrats were and are equally responsible for dividing this country up into constituency groups that fight with each other over the spoils of America’s Gross Domestic Product.  The Democrats’ ulterior motive for dividing Americans into competing constituency groups is and was for the sole purpose of “buying” votes to stay in power.

Dreamers are only a tiny part of a much bigger problem.  The idiocy of where America is today, at the hands of the Democrats, was exquisitely described in a series of “If” statements written down by some unknown author.  We slightly altered the statements to punctuate our point.  We could have added several more “If” statements but decided to keep it to the posted list for brevity.  These true “If” statements have been circling all over the Internet for several years and we know most of our readers have read them.  But so far all the people do is laugh.  They never lift a finger to correct the described idiocy.

We ask, where is the outrage?

For over 100 years, as we slipped ever deeper into the socialist abyss, more and more of these “If” statements have been added to the list, while Americans looked the other way and allowed Democrats to bastardize a free and prosperous Constitutional Republic into a heavily restricted and regulated mob rule Democracy.

We have allowed our public school and academic education institutions to pump out brainwashed graduates who then occupy positions in government bureaucracies that have now become the Democrat “Deep State.”  They are doing everything in their power to erase what is left of American conservatism ….. and they are winning.  Over 17% of the American labor force, some 40 million people, work for or are contracted by local, state, or the federal government and essentially obtain their living from the taxpayer.  Most of those 40 million people attended liberal colleges and are fundamentally, to their core, liberal.  Those 40 million liberals have the power to shape and control American politics from within and even have the power to subvert, disrupt and overwhelm presidential power ….. and their own bosses.

That “Deep State” power was epitomized by recently revealed evidence of high-level government employees in the FBI and the Department of Justice working diligently to make sure that Donald Trump never became president and working diligently to undermine and derail the Donald Trump presidency after he became president.  Those “Deep State” undermining efforts are going on as we speak, in every level of the federal government.

Conservative Americans can no longer restore America at the voting booth because government dependents, “Deep State” sycophants and the rest of the Democrat voting bloc have the majority.   Trump’s election was an electoral anomaly.  Hillary won 3,000,000 more votes than Donald.  If the Democrats are successful in obtaining amnesty for the 800,000 or so Dreamers and maybe even their extended families, the Democrat majority increases even more.  Well over 90% of all illegal aliens who would be granted amnesty and become eligible to vote would vote Democrat and the Democrats know it.  That is why the Democrats don’t want a wall on the southern border and that is why they are lax on other border security issues, all the while gushing out that America is a country of immigrants.  That’s right!  Legal immigrants!

Sadly, we have allowed all government, local, state and federal, to become so powerful that to confront and override that power would take millions of Americans, acting in unison, with a powerful, wealthy organization and a foolproof plan and with sufficient men, materials and money ….. lots of money.  We see no evidence that such a large organization is even on the drawing board.  What we do see is a lot of moaning, groaning and gnashing of teeth about how America has become a bankrupt police state and is no longer the country they grew up in.  We also see that the other side can get millions of women to march in cities all over America.  At least they are organized and have money.  There is always money for liberal causes.

If we can’t restore America to the intent of the Founding Fathers as a Constitutional Republic at the voting booth, or in the courts, or by a massive advertising campaign, there may be only one peaceful alternative left, short of revolution.  That alternative is an idea that will sweep across America like a wind-driven, out-of-control, raging forest fire.

Almost 2,500 years ago Socrates, Plato and Aristotle started to wax philosophically about the relationship of the people to government and freedom.  A little over 2,000 years ago an idea captured the hearts of millions of people and that idea, Christianity, changed the world forever.  In 1215 the early concepts of freedom spawned the Magna Carta and put shackles on the King’s power.  In the late 1600’s the philosopher John Locke further defined the concepts of freedom and those concepts heavily influenced the leaders of a new land on a new continent to draft the Declaration of Independence, that again, changed the world forever and defined individual freedom and unalienable rights.  Sadly, those concepts of individual freedom and unalienable rights started to be smothered under a corrupt pile of rubble called Progressivism.  If powerful ideas can change the world, then another powerful idea can restore America’s Constitutional Republic.  We will be exploring this powerful idea in subsequent articles.

Ladies and gentlemen, IF WE DO NOTHING, Democrats like Chuck Schumer, Nancy Pelosi, the very liberal “Deep State,” academia, the press and people dependent on government will eventually rule what’s left of America and all illegal aliens, including the 800,000 Dreamers, will receive amnesty and will vote Democrat.  That is an indisputable, unavoidable fact.  Game over ….. IF WE DO NOTHING!

Footnote:  Inexplicably, President Trump now wants to give a path to citizenship for 1,800,000 Dreamers.  We keep wondering who the enemy is.  Legal Americans can go to jail for handing out plastic straws (California) but illegal aliens get rewarded for breaking our laws.  The world is upside-down and sideways and American citizens have fewer rights than those who break our immigration laws.  One wonders, will illegal immigration finally trigger the predictable revolution?

What is your IDEA?.