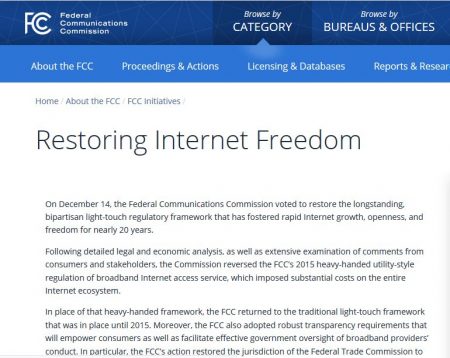 (Dec. 17, 2017) — The Humanitarian Hoax is a deliberate and deceitful tactic of presenting a destructive policy as altruistic. The humanitarian huckster presents himself as a compassionate advocate when in fact he is the disguised enemy.

Barack Obama, the humanitarian huckster-in-chief, weakened the United States for eight years presenting his crippling policies as altruistic when in fact they were designed for destruction. His late-term passage of FCC 15-24, the Report and Order on Remand, Declaratory Ruling, and Order in the Matter of Protecting and Promoting the Open Internet, named Net Neutrality, was no exception.

Humanitarian hoaxes are deceitfully given positive-sounding names that disguise their negative intent and mislead the trusting public. The Affordable Care Act was not affordable, the Southern Poverty Law Center is the enemy of free speech, George Soros’ Open Society Foundation funds anarchy all over the world. The deceptive names are the opposite of what the organizations and policies actually do. So, “Net Neutrality” sounds constructive and fair but it is actually a Leftist attack on Internet freedom designed to restrict freedom of speech – particularly the opposition speech of conservatives and libertarians. This is how it works.

The World Wide Web (WWW) for non-governmental commercial use has been an open, unrestricted American business since its launch over twenty years ago. The WWW is the 21st century public square for information-sharing in the world. Internet business is divided into two separate sections. There are Internet Service Providers (ISP) like Comcast, Verizon, and AT&T and there are Internet Content Providers like Google, Microsoft, Facebook, Amazon, and Twitter. In 2015 Obama disingenuously decided to “protect” the open Internet and passed regulation FCC 15-24 deceptively tagged “Net Neutrality.” Roger Stone has written an exceptional article on the subject explaining what it all means.

To summarize, the FCC has the authority and discretion to decide to apply rules or not to apply rules – it can choose who to regulate vigorously and who to disregard. The new rules were specifically written under Title II provisions that stipulate Internet Service Providers (ISP) are to be bound by Net Neutrality. So, “Net Neutrality” binds Internet Service Providers to the rules but exempts Internet Content Providers.

The Tech-Left was instrumental in the formulation of “Net Neutrality” and helped write the new rules. Not surprisingly, the consequence is that the Leftist content providers who currently dominate the WWW are “free to restrain content by censoring out all conservative and libertarian views at will, without so much as an explanation to anyone why the objectionable views were banned.” It is complete censorship and very dangerous – it is the Humanitarian Hoax of Net Neutrality.

The leftist elites in Silicon Valley funded generously by George Soros embraced Marshall McCluhan’s famous saying “the medium is the message.” They understood that political control is only possible with communication control – control the medium and you control the message. The purpose of Net Neutrality was control of the Internet to control its ideological content.

Net Neutrality is a serious stealth attack on free speech in the public square that legalizes censorship by Internet Content Providers on the WWW. The left-wing liberal narrative already dominates American universities, the entertainment sector, and the mainstream media. Net Neutrality is a power grab for the WWW. There is no freedom without freedom of speech. If the Leftist behemoths are free to regulate and censor content on the Internet then we no longer are living in a free society or a free world – we are living in the dystopian society described by George Orwell in his famous book 1984. 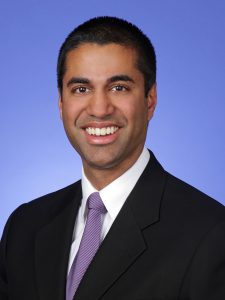 Chairman Ajit Pai, Trump’s designated Chairman of the Federal Communications Commission (FCC), generously described the 2015 FCC 15-24 ruling “a mistake.” He pointed out that the Internet grew and thrived for nearly 20 years before the implementation of Net Neutrality under pressure from the Obama White House. “For one thing, there was no problem to solve. The internet wasn’t broken in 2015,” said Mr. Pai. “We were not living in some digital dystopia. To the contrary, the Internet has been one thing, perhaps the only thing in American society, that we can all agree has been a stunning success. Not only was there no problem, the solution hasn’t worked.”

The good news is that Ajit Pai ended the FCC 15-24 deception on December 14, 2017 with a 3-2 FCC panel vote victory. Of course the Left is already challenging the outcome with their predictably hysterical “end of the world” cries that are exactly the OPPOSITE of what the repeal of Net Neutrality will accomplish. Consider the following Leftist predictions courtesy of Breitbart:

1) The End of the Internet As We Know It!

7) The end of Net Neutrality means the end of democracy

9) The end of Net Neutrality means the FCC chairman will try to meme – the ONLY true prediction;)

Net Neutrality is a signature Obama humanitarian hoax promising Internet fairness but delivering Internet unfairness and legalized censorship. Only in the Leftist/Orwellian world of subjective reality is censorship considered “fair” and truth labeled “hate” speech. In the real world of objective reality censorship remains against the law in America and freedom of speech protects the truth. Obama’s Net Neutrality is a deceitful attempt to bypass the Constitution and award exclusive control of Internet content to the Leftist behemoths that currently dominate the WWW.

Barack Obama continues to lead the Leftist Democrat Party with its “resistance” movement. It is the party of the Humanitarian Hoax attempting to destroy American democracy and replace it with socialism. The single greatest threat to America is the absence of freedom of speech which is precisely the goal of the foiled Humanitarian Hoax of Net Neutrality. Be glad that FCC 15-24 has been rescinded. It is not the end of the world, it is the beginning of a new era of deregulation and renewed protection of our precious freedoms.