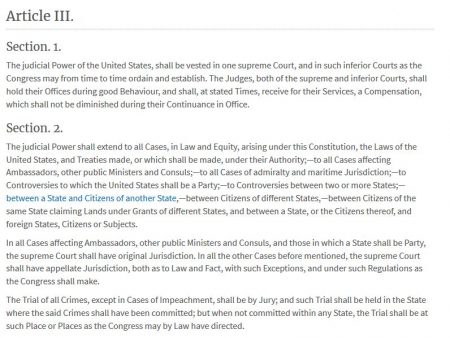 (Dec. 6, 2017) — After the SCOTUS ruling this past week which has overturned the efforts of activist judges in the federal courts, it is obvious that a lot of time and money have been wasted while jeopardizing our national security and US.  I am not a legal scholar, but, I know the U.S. Constitution allows the POTUS broad controls of who may enter our country.  If I know this, why don’t these federal judges who are supposed to be on top of their game know this?  The answer to this question seems obvious.

Common sense tells us that if any person does his job poorly OR stupidly tries to obstruct activities in a company he works for… he is summarily fired.  This is a world most government officials don’t seem to understand.  With the phrase “You’re Fired!!” in mind, searching the worldwide web seemed to be a good idea to learn what recourse we citizens have to respond to these judges who are obviously misbehaving.

This search led to an article in the Yale Law Journal (October 2006) which has some very interesting insights regarding the removal of federal judges.  A copy of the article’s abstract is included below along with a link to the full article for anyone wanting to read further.   Hopefully, this article will find its way to some courageous (constitution-loving) legislator’s or prosecutor’s desk.  It is time to hold misbehaving judges accountable for their actions.

Recent removal of Alabama Supreme Court Chief Justice (Roy Moore; 2003 and 2016) suggests that the conventional view (impeachment being the only method for the removal of federal judges from the bench) might be in error.  The removal/suspension was accomplished through the Alabama Court of the Judiciary.

What could be considered misbehavior by a federal judge?  This question will undoubtedly be parsed out by a variety of legal minds.  From a layman’s point of view it would seem that misbehavior is:

1.  Rendering decisions that “make new law.”
2.  Rulings that are obviously contrary to OUR constitution.
3.  Judicial activism in pursuit of a political objective.
4. A judge breaking “ethical rules” or the Canons which are laid out in the “Code of Conduct for United States Judges.”
(http://www.uscourts.gov/judges-judgeships/code-conduct-united-states-judges) 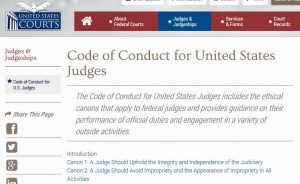 Many other items could probably be added to this short list, but observation indicates that the aforementioned “Code of Conduct” seems to be ignored by our government officials and is certainly not being adhered to.

In short, it may take an “Act of Congress” to build the mechanism necessary to remove misbehaving judges.  We can only hope that this will happen sooner rather than later.

How To Remove a Federal Judge

To read the entire 66 page article go to this link:
https://www.yalelawjournal.org/article/how-to-remove-a-federal-judge