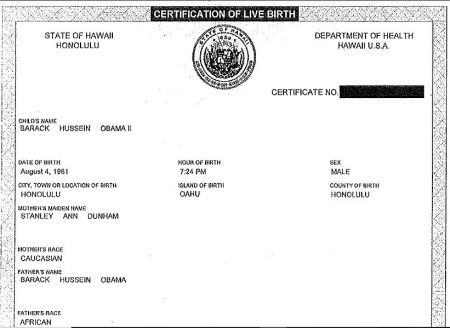 Part 1 of The Post & Email’s synopsis of Zullo’s remarks on the December 1 edition of “Freedom Friday,” hosted by Carl Gallups, is here.

Starting at the 13:11 mark in the 45-minute interview, Zullo reminded listeners that in January 2011, the newly-elected governor of Hawaii, former Congressman Neil Abercrombie, claimed that he was “investigating” where Obama’s original birth certificate could be found and planned to make the document public to settle existing doubts and Obama’s eligibility before the 2012 election.

By virtue of hundreds of requests submitted to the Hawaii Department of Health (HDOH) beginning in 2008 for Obama’s birth record resulting from reports that he was born in Indonesia or Kenya, concerned Americans learned that “vital records,” which include birth certificates, are not releasable publicly under state law.

In an article published on January 18, 2011 now categorized as an “editorial” despite its straight-news format, the Honolulu Star Advertiser’s “political columnist Richard Borreca” questioned Abercrombie about how he planned to advance his gubernatorial priorities, particularly in addressing Hawaii’s financial crisis.

At the end of the interview, Borreca asked Abercrombie about his remarks, reported on December 24, 2010 by The New York Times, indicating that he was “seeking ways to change state policy to allow him to release additional proof that the president was born in Honolulu in 1961.”

In its article, The Times wrote that Abercrombie had contacted “the state’s attorney general and the chief of its Health Department about how he can release more explicit documentation of Mr. Obama’s birth…”:

Although faulting “birthers” for being politically-motivated in major media interviews the month before, Abercrombie reportedly told Borreca that he considered at least one concern expressed to him about Obama’s eligibility  to be “genuine.”  In response to Borreca’s first question on the topic, Abercrombie said, “I got a letter from someone the other day who was genuinely concerned about it; it is not all just political agenda. They were talking on Olelo last night about this; it has a political implication for 2012 that we simply cannot have.”

The new governor added of Obama’s birth record that “It was actually written I am told, this is what our investigation is showing, it actually exists in the archives, written down…”

On October 31, 2008, just days before the presidential election, then-HDOH Director Dr. Chiyome Fukino had issued a statement claiming that she had “personally seen and verified that the Hawai’i State Department of Health has Sen. Obama’s original birth certificate on record in accordance with state policies and procedures.”

On July 27, 2009, Fukino issued a second statement in which she said that she had personally viewed Obama’s “original vital records” on file with the department.

On July 28, 2009, Dan Nakaso of the Honolulu Advertiser, which later merged with the Honolulu Star to become the Star Advertiser, reported that Obama’s “original” birth certificate was “in storage” while referring to Fukino’s statement of the day before.

Abercrombie ultimately said he could not produce the document for public consumption because of Hawaii’s confidentiality laws.  On January 21, 2011, CBS News reported:

Regarding Fukino’s and Abercrombie’s conflicting statements, Zullo observed, “Abercrombie comes after her in the timeline, and they can’t find it.”

Following that discussion, Zullo raised questions about a letter Obama allegedly wrote as his “first official act” in the White House to Kapiolani Medical Center for Women & Children to congratulate the facility on its 100-year anniversary.

Although Obama was first reported by major media as having been born in Queens Hospital, he claims to have been born at Kapiolani on August 4, 1961, when it was called “Kapiolani Maternity & Gynecological Hospital.” 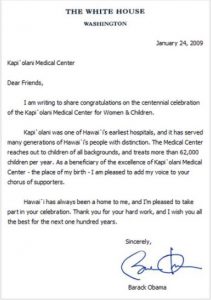 Zullo then pointed out to the audience that “Through a WND investigation, it was later determined that the actual letter…was actually a fraudulently-created PDF file printoff,” he said.

“It was a test run,” Gallups responded with a chuckle.

Zullo then revealed that he believes that Obama’s Certification of Live Birth, or the “short-form” birth certificate released online in June 2008, was “authentically-created by the Department of Health.”  Additionally, Zullo said that the investigation ultimately unearthed “documentation that points to about seven computer breaches over a four-year span of time [which] looks to be coming from Washington, DC, Virginia area into the Department of Health in Hawaii’s vital statistic records that are housed at the University of Hawaii.”

“And you’ve got the hard-copy records of those breaches,” Gallups stated declaratively.

“Yes, and what’s significant about that is, back when files were done with paper and ink, what could happen is someone would create a phony file in a department of health — it happened in New Jersey — put in phony documents, and the unsuspecting clerk, when the individual who was supposed to receive that illegal document would go in and ask for a copy of their birth certificate, the clerk would look, unsuspecting; everything looked in order and issue the document,” Zullo said.

“We believe there is a good chance that what was done is, a surreptitious record was placed in those computer files, and that would allow for the creation of an official short-form birth certificate out of Hawaii,” he continued.  “But the problem became when they wanted to see the long form…” he expounded.

This series will be continued in a near-term third installment.