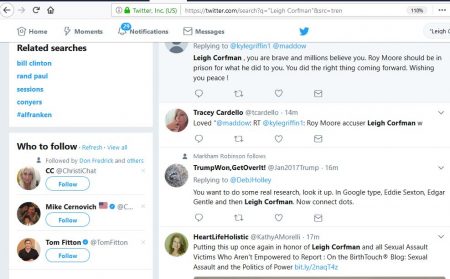 (Nov. 29, 2017) — On Wednesday morning, The Post & Email noticed that “Leigh Corfman,” one of US Senate candidate Roy Moore’s accusers, was trending in third position on Twitter. While reading under that topic, we noted that major media, beginning with AL.com, published an “open letter” from Corfman to Moore stating that he has impugned her reputation by refuting her claim that he had a sexual encounter with her when she was 14 years old and calling her “a liar.”

The letter takes issue with a campaign appearance Moore made on Tuesday evening in Henagar, AL wherein Moore reportedly “denounced” Corfman.  The letter states, in part:

The initial barrage of attacks against me voiced by your campaign spokespersons and others seemed petty so I did not respond.

But when you personally denounced me last night and called me slanderous names, I decided that I am done being silent. What you did to me when I was 14-years old should be revolting to every person of good morals. But now you are attacking my honesty and integrity. Where does your immorality end?

I demand that you stop calling me a liar and attacking my character. Your smears and false denials, and those of others who repeat and embellish them, are defamatory and damaging to me and my family.

I am telling the truth, and you should have the decency to admit it and apologize.

In her letter, Corfman acknowledged that The Washington Post contacted her about her alleged encounter with Moore, a claim her mother, Nancy Wells, reiterated to Breitbart News.

Coverage of the Henagar campaign event was almost exclusively restricted to reports that a Moore campaign staffer had “physically confronted” a Fox cameraman.  However, a detailed article at The Southern Torch reported of the rally:

Judge Roy Moore addressed a standing room only crowd in Henagar earlier tonight. The event drew many supporters from the area and even national television news crews.

Cameras from the Fox News, ABC, NBC, CNN, and many other networks set up in the Henagar Community Center several hours before the event.

The crowd and media were welcomed by Henagar City Councilman Jeff McCurdy. Reverend Kenneth Goggins led the prayer and DeKalb County Chairman for Moore, Tony Goolesby led the crowd in the Pledge of Allegiance as well as introduced Moore.

Moore was joined at the event by his wife Kayla, his sons Caleb and Roy Jr., as well as his daughter in-law, also named Kayla.

Other tweets which caught our attention on Wednesday morning were that Corfman reportedly had retained or was represented by an attorney in Hoover, AL, apparently prior to the November 9 article at The Washington Post in which Corfman’s story was published as the most egregious of four women’s alleged accounts from when they were teenagers.

Part of the Twitter feed on that topic appeared as follows at 8:20 a.m. EST on Wednesday:

In a general Internet search, using the names proffered in the tweet of “Eddie Sexton” and “Edgar Gentle,” along with “Leigh Corfman,” yielded a reference to a single blog, which quoted from a November 9 article at AL.com contending that an attorney, Eddie Sexton, represented Corfman.

Why the AL.com article did not appear on its own given the accurate search terms is an unanswered question. 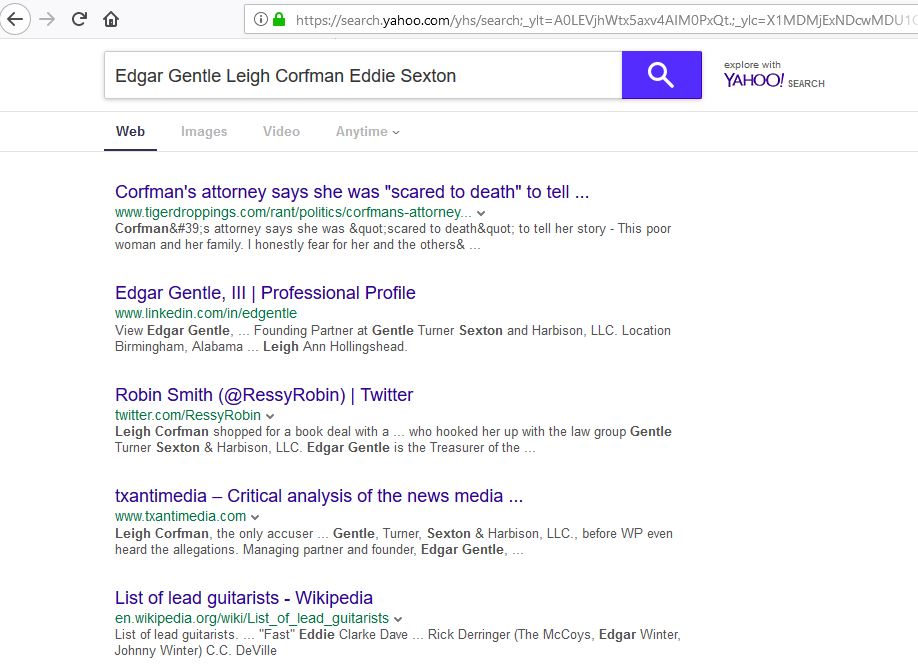 An attorney for Leigh Corfman, whose story of a sexual encounter with Roy Moore when he was 32 and she was 14, broke today, said Corfman stands by her story.

Hoover attorney Eddie Sexton told AL.com that Corfman has wanted to publicly talk about the time in 1979 when Moore dated her, but never felt like it was the right time.

“Her kids are out of the house now, grown, and I think she felt like it was the right time to do it,” said Sexton. “I’m sure she was scared to death.”

Corfman had been talking with reporters from the Washington Post for several weeks, he said

Because the claims are accusations and have not been proven, journalistically, the word “alleged” should be used when writing or speaking about them.

The Post & Email can exclusively report that after calling 205-716-3000 and speaking with a receptionist at the firm Gentle Turner Sexton & Harbison LLC at 12:55 PM EST/11:55 AM CST, we were told that Sexton “is no longer representing her.  I don’t know who is representing her now, but it’s no one in our firm.”

When our call was answered, we initially asked if the firm had a person who handles media inquiries. The receptionist asked us to restate our question, which we did, explaining that Sexton’s name appeared in a November 9 article at AL.com as Leigh Corfman’s attorney and we thought it proper to direct our questions to the media contact person.

We informed the receptionist that we were taking notes on the conversation, to which she did not object.  When we asked her if she were aware of the article, she responded, “I’m not aware of the article, ma’am, but he no longer represents her; I’m sorry.”  “Can you tell me when that representation stopped?” we asked, to which she responded,  “I don’t know any more information than that.  That’s all I was told, ma’am.”

“Do you know if he represented her that day that the article came out?” we persisted.

“I don’t know any more information except for what I told you; I’m so sorry, ma’am,” she said.

We then thanked her, wished her a pleasant day, and hung up.

Had a media person been available, we had intended to ask why, if Corfman were represented by counsel, she wrote an open letter to Moore and submitted it to AL.com rather than filing a defamation lawsuit against him.

In an interview last week with television host and former Alabama state senator Scott Beason, more pledged to file a lawsuit against the accusers once all of the evidence his legal team needs is assembled.

Moore has denied Corfman’s claims and those of a number of other women who said he made improper advances toward them when they were in their teens or early 20s.

One of the accusers, Beverly Young Nelson, is represented by high-profile California attorney Gloria Allred. Allred has refused to release for forensic examination a yearbook Nelson claimed at a press conference was signed by Moore on December 22, 1977.

Moore denied having signed the yearbook, and his attorney, Phillip Jauregui, said at a November 15 presser that the initials following the signature belonged to Moore’s then-assistant and did not signify “District Attorney,” as Nelson appeared to claim.

On Tuesday, One America News Network posted a video in which reporter Scott Pearson demonstrated evidence that a former Gadsden police officer also interviewed by The Washington Post has family members and other associates who have reason to harbor ill feelings toward Moore, who was a Circuit Court judge for a number of years before being elected Chief Justice of the Alabama Supreme Court in 2000.

12 Responses to "Exclusive: Corfman Attorney “No Longer Represents Her”"